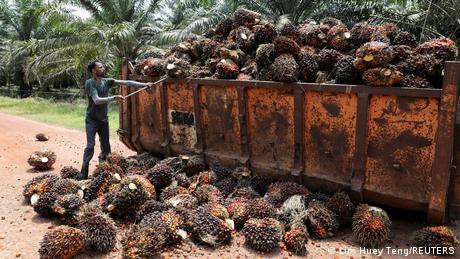 In 2020, Indonesia brought a case against the EU to the World Trade Organization (WTO) over its phased banning of imports of palm oil, which Brussels says is a leading driver of deforestation across the world.

Indonesia and Malaysia, which supports the case, are the world's two largest producers of the product. Sources within the EU think that the WTO ruling will be held at the end of the year.

But war in Ukraine has driven up demand for palm oil again. Russia and Ukraine are the world's biggest producers of sunflower oil, which was being used by many European companies as the main replacement as they removed palm oil from their supply chains. But the conflict has markedly reduced the amount of sunflower oil on the global market.

Amid the Russia-Ukraine conflict, "the solution for the edible oil sector may lie in a reverse to the old ways through adoption of various palm oil...applications," the Council of Palm Oil Producing Countries, a trade association made up of Malaysia and Indonesia, said in a statement.

Even before the Ukraine war began, the price of crude palm oil was up 40% year-on-year in February, the result of a poor harvest in 2021. It rose further after the Russian invasion.

Indonesian palm oil producers responded by trying to boost their exports, but that has led to a surge in prices of cooking oil, made from palm oil, within Indonesia. Jakarta is now trying to curb exports, with limited successes.

This may just be a blip, some say, and won't impact the EU's resolve over its global environmental policy.

"Just as the war has prompted Germany to set sights on a 100% [renewable energy] target by 2035, the EU should encourage countries in Southeast Asia to adopt a 100% target," Nithi Nesadurai, regional coordinator of Climate Action Network Southeast Asia, told DW.

Impact of the Ukraine war

Others, though, believe that the global economic situation caused by the Ukraine war has weakened the EU's stance, allowing Southeast Asian states more leverage to pressure Brussels to weaken its restrictions on palm oil imports.

"It could well change the dialogue," said Elizabeth Robinson, director of the Grantham Research Institute on Climate Change and the Environment at the London School of Economics and Political Science.

"We have already seen plenty of discussion as to whether the war in Ukraine will derail the green energy transition or lead to countries transitioning more rapidly away from fossil fuels," she added.

"There are likely to be similar discussions as to the implications of the disruption of the sunflower oil export market."

It could also be the case for the EU's proposed regulation on deforestation-free products, a scheme announced last November that will force foreign companies selling soy, beef, palm oil, wood, cocoa and coffee in EU markets to prove production processes are deforestation-free.

An opportunity for Indonesia and Malaysia

Zuraida Kamaruddin, Malaysia's minister for Plantation Industries and Commodities, told Bloomberg in November that her country wasn't concerned about the proposed new EU regulations since Malaysia is focused on "increasing productivity of the existing planted area rather than expansion."

A Malaysian official, who asked for anonymity because they were not authorized to speak, reckons the government is now pushing the EU to improve its economic incentives for compliance with the proposed deforestation-free products regulation.

"Negotiation can be in terms of clear and measurable indicators for compliance, time steps, and clear economic incentive for those who comply," Herry Purnomo, deputy country director for Indonesia at CIFOR-ICRAF, a global research institution, told DW.

A lesson, he added, could be taken from the Forest Law Enforcement, Governance and Trade (FLEGT), an EU law regulating timber entering its market.

The EU and Indonesia negotiated a Voluntary Partnership Agreement over this mechanism, and in 2016 Indonesia became the first country in the world to issue FLEGT licenses for timber products exported to EU markets.

Kiki Taufik, global head of Greenpeace's Indonesian forests campaign, said he doesn't expect the Ukraine conflict will mean the EU "turns its back on something as important as sustainability and climate change."

"The proposed EU regulation [on deforestation] offers an opportunity for Indonesian and Malaysian producers and processors… to be able to demonstrate traceability to the plantation or farm and that they are deforestation-free," said Taufik.

"This includes smallholders, and will enable them to have continued and expanded access to the high value EU market," he added.

However, Purnomo warns that the economic costs of deforestation-free products are enormous in high-risk forested areas, such as those in Malaysia and Indonesia, and the costs are "probably beyond the thinking of global green trade negotiators."

The main concern is over the smallholders who, without assistance, won't be able to afford the technology or costs associated with proving their products are deforestation-free.

The EU could respond with some financial inducements, such as Carbon Adjustment Mechanism, which is also under consideration, but "these alone are insufficient and would need to be coupled with a premium price for compliant palm oil," said Purnomo.

A European Commission source, speaking anonymously, said they believe the proposed deforestation legislation could take at least two years to be adopted. They were of the opinion that parts of the mechanism could be tweaked after negotiations with Indonesian or Malaysian officials but the proposed legislation won't be radically altered.