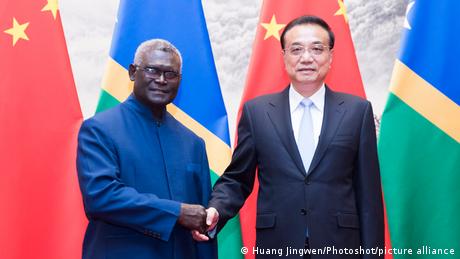 Prime Minister Manasseh Sogavare of the Solomon Islands stressed on Wednesday that the country's new security agreement with China won't hurt regional security in the Pacific.

"I ask all our neighbors, friends and partners to respect the sovereign interests of the Solomon Islands on the assurance that the decision will not adversely impact or undermine the peace and harmony of our region," Sogavare told parliament.

The Solomon Islands said in March that it was establishing a partnership with Beijing to help cope with its own internal security situation.

"Let me assure the people of the Solomon Islands that we entered into an arrangement with China with our eyes wide open guided by our national interests," Sogavare said.

The pact has prompted concerns across the Pacific, particularly in Australia, as well as the United States.

The two countries have launched a series of diplomatic efforts to persuade the Solomon Islands to hold off the pact with Beijing, fearing China could increase influence in the Pacific. A US delegation led by Assistant Secretary of State for East Asian and Pacific Affairs Daniel Kritenbrink is scheduled to visit Honiara in the Solomon Islands this week.

"The agreement seeks to enhance social stability and long-term tranquility in the Solomon Islands," he said. "Does the US view island nations as independent states with national sovereignty, or does it treat them as its appendants?"

The spokesperson of the US National Security Council has said the signing of the security pact "follows a pattern of China offering shadowy, vague deals with little regional consultation in fishing, resource management, development assistance and now security practices."

While the content of the official security pact has yet to be released, a draft that was leaked last month suggested the agreement could allow Chinese naval vessels to stop in the Solomon Islands as well as for Chinese police to be deployed at Honiara's request to help maintain social order.

Mihai Sora, a research fellow at the Sydney-based Lowy Institute's Pacific Islands Program and a former Australian diplomat to the Solomon Islands, told DW, "The lack of transparency in negotiating this deal has an impact on the rest of the region."

The security pact "over-accommodates" what would be required for China to provide a disaster response, Sora said. "You don’t need this level of security treaty if you are just providing disaster response or equipment," he said, adding that the deal "proves China’s strategic ambitions go far beyond economic cooperation with Pacific Island countries."

In 2019, the Solomon Islands made a decision to switch diplomatic allegiance from Taiwan to China.

Sora says that as China is the main economic partner for Pacific Island countries, "Australia needs to consider how it can establish a deep economic relationship with the Pacific."

The Solomon Islands has long struggled with domestic unrest since the late 1990s, and it has requested security assistance from Australia and other regional countries before. The Solomon Islands signed a security agreement with Australia in 2017, which Honiara assured wouldn't be affected by the security pact with Beijing.

In November 2021, unrest broke out in Honiara, where protesters targeted the city's Chinatown and tried to storm Sogavare's residence.

Can the pact help China secure footing in the Pacific?

Despite Sogavare's repeated assurance that no Chinese military base would be built in the Solomon Islands through the security pact, Australia's Defense Minister Peter Dutton has warned that China will not waste any time expanding its presence in the South Pacific.

"You can expect the Chinese to do all they can now that they've got this agreement signed," Dutton said in an interview with Sky News.

But Tess Newton Cain, the project lead of the Pacific Hub at Australia's Griffith University, says concerns in the Solomon Islands are focusing more on local employment rather than regional security.

"The concerns are more around Chinese influences taking over areas of businesses that have previously been occupied by indigenous people, the lack of jobs for local people in Chinese infrastructure projects and the exposure of political elites in the Pacific to Chinese practice that undermines democratic culture like freedom of expression," she told DW.

"How can Australia make sure that it keeps that relationship in focus and that it can continue to demonstrate the importance of that relationship to the people of Solomon Islands and also to the wider region," she said.