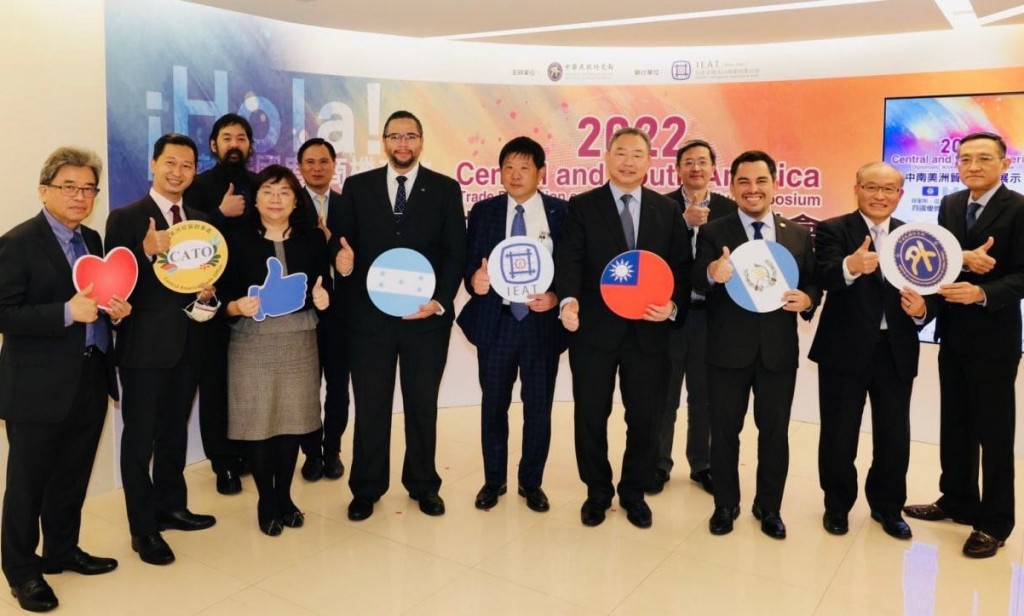 The symposium is the first of a series of events under the Central and South America Import Promotion Project aimed at helping Taiwanese businesses get acquainted with diplomatic allies’ markets and related investment opportunities, Deputy Foreign Minister Alexander Yui (俞大㵢) said. Enterprises can also learn how to take advantage of free trade and economic cooperation agreements (FTA, ECA), he added.

Yui mentioned that Taiwan’s Central and South American allies, Belize, Guatemala, Honduras, and Paraguay, “have gone to great lengths to support Taiwan in the international arena.” He said Taiwan has also strived to promote industrial development and transformation in these diplomatic allies and to explore mutually beneficial business opportunities.

He highlighted the beef, seafood, coffee, and cane sugar imports that are shipped to Taiwan from the region and said that despite the pandemic, Taiwan’s exports rose 83% to Belize, 81% to Guatemala, and 18% to Honduras in 2021. These figures “provide strong evidence of the huge opportunities and potential that remain to be tapped in these markets,” he said.

The deputy minister said that Taiwan’s Central and South American diplomatic allies make high-quality agricultural and aquaculture products, which can be improved upon by integrating them with Taiwan’s food processing technologies and capacity for innovation. “For this reason, we encourage businesses from both sides to use Taiwan as a base for expanding into other lucrative Asian markets.”

Chung Hua Institution for Economic Research Deputy CEO Li Chun (李淳) said that Taiwan’s ECAs with Belize and Paraguay and FTAs with Guatemala and Honduras have mutually lowered tariffs on imported and exported products. He added that while the agreements have helped boost trade in existing markets between Taiwan and its allies, they have also served to identify opportunities to expand in new areas.

Li said that through the trade agreements, these regional diplomatic allies have collectively become Taiwan’s strategic trade and investment partners, serving as a gateway to the Latin American market.

Guatemalan Ambassador Willy Gomez said that even though exports to Taiwan have increased by 75%, “we need to improve our business and commercial relationship.” He said that Guatemala currently ships largely coffee, sugar, and rum to Taiwan but intends to expand into the pharmaceutical, textiles, and energy markets.

Honduran Embassy Counselor Juan Rodriguez said that it has been promoting melon and cocoa beans in addition to the export of coffee and white shrimp to Taiwan. He said that the embassy has been cooperating with the Ministry of Foreign Affairs and the Central American Trade Office to bolster bilateral trade.

Carlos added that the Taiwan-Honduras FTA has allowed for more fluid exchanges in the commercial and economic field and expressed the hope that the two nations can open up new markets for trade.

Macarena Barboza, the commercial attaché of the Paraguay embassy in Taiwan, said that the South American country actively cooperates with government ministries and NGOs including MOFA and TAITRA to increase exports to Taiwan.

She said that Paraguay has recently been promoting pork products, which have been confirmed free of African Swine Flu by the Taiwan government but are still undergoing food safety inspections. Barboza added that Paraguay has all the tools to produce the highest standard of organic, ecological, and sustainable goods.

Commenting on Belize-Taiwan trade, Ambassador to Taiwan Dr. Candice Pitts said that it is “high time to augment commercial activities between Belize and Taiwan.” She mentioned that since the ECA went into effect in January 2022, many Belizean exporters and suppliers have voiced interest in exporting more products to Taiwan, including rum, lobster, shrimp, beef, and beans.

She also said that the Belizean embassy is helping to facilitate the process of getting the Belize Food and Drug Administration (FDA) to apply to have more exported products approved by the Taiwan FDA.

Three Taiwanese businesses with operations in the region also gave presentations to share their experiences with the audience.