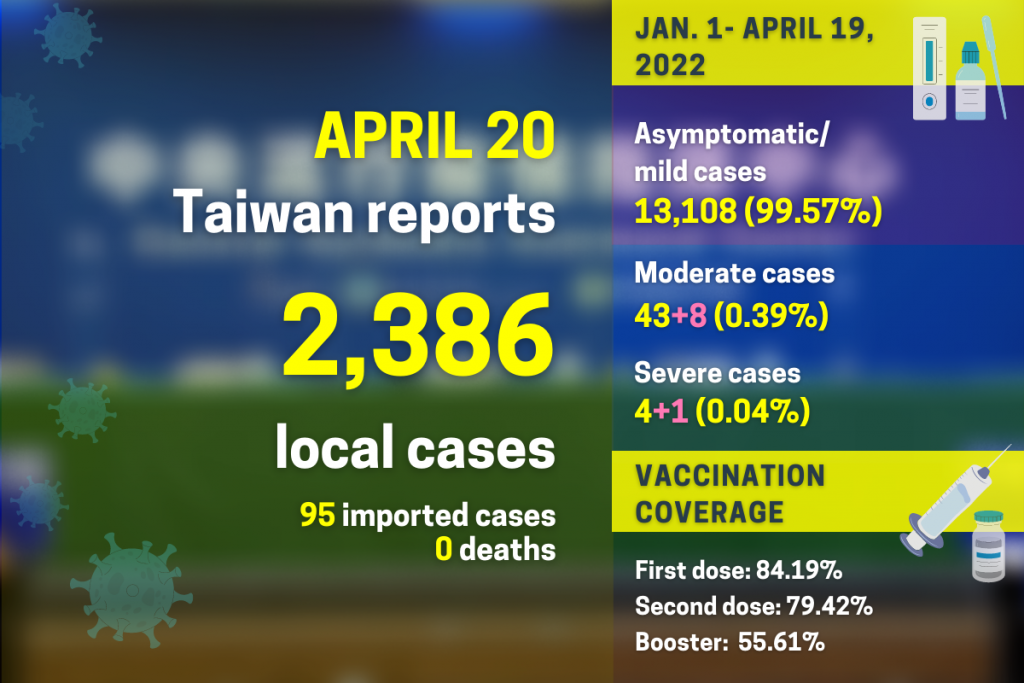 The local cases reported include 1,232 males and 1,154 females ranging in age from under five to their 90s, with the dates of onset ranging from March 19 to April 20. Among Wednesday's cases, 1,267 were asymptomatic.

New Taipei City reported the largest number of cases with 822, followed by 471 in Taipei City, 387 in Taoyuan City, 191 in Keelung City, 97 in Kaohsiung City, 89 in Yilan County, 86 in Hualien County, 76 in Taichung City, 31 in Pingtung County, 24 in Tainan City, 23 in Hsinchu County, 17 each in Changhua County and Nantou County, 16 in Miaoli County, 14 in Yunlin County, 11 in Hsinchu City, five in Taitung County, three each in Chiayi City and Lienchiang County, two in Chiayi County, and one in Penghu County.

The 95 new imported cases include 54 males and 41 females ranging in age from under 10 to their 60s. Of these, 82 tested positive upon arrival at the airport and 13 during quarantine.

They arrived between March 21 and April 19 from Vietnam (four cases), the U.K., and Thailand. The country of origin of 89 cases is still being investigated.

A total of 203 people have been removed as confirmed cases, while 14 cases are still under investigation. Up until now, 856 individuals have succumbed to the disease.