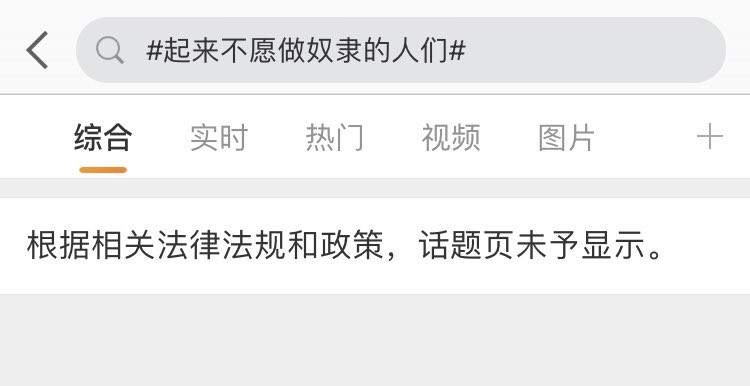 TAIPEI (Taiwan News) — As residents of Shanghai bring their protests against their government’s extreme zero-COVID policies onto social media, online censors have banned a hashtag containing the lyrics to the Chinese national anthem, "March of the Volunteers."

“Here’s a sentence I never thought I’d say: the first line of China’s national anthem is censored on (Chinese social media platform) Weibo,” London-based journalist Mengyu Dong wrote on Twitter on Monday (April 18). She shared a screenshot of a Weibo search result for the hashtag “Rise! Those who refuse to be slaves,” in which a system message reads, “According to relevant laws and policies, the topic page has not been shown.”

Dong wrote that this was in response to people using the lyrics to vent frustration about prolonged lockdowns.

At the time of publishing, Weibo displays a message reading “We’re sorry, no result related to #rise those who refuse to be slaves# has been found” when the hashtag is entered. When the lyrics are entered as keywords and without the hashtag, Weibo presents posts praising patriotism.

Weibo user “Spicy French Fries” (辣味薯條) commented, “I’ve sung the first line of the national anthem for over 20 years, but now I don’t understand it as I sing.”

Dong’s tweet has been widely shared by Western journalists and figures, who described the phenomenon as “ironic” and “unreal.”

Here’s a sentence I never thought I’d say: the first line of China’s national anthem is censored on Weibo.

Hashtag “起来不愿做奴隶的人们” (Stand up! Those who refuse to be slaves) has been banned after people used it to vent frustration about prolonged lockdowns. pic.twitter.com/OxVRXvtaqY