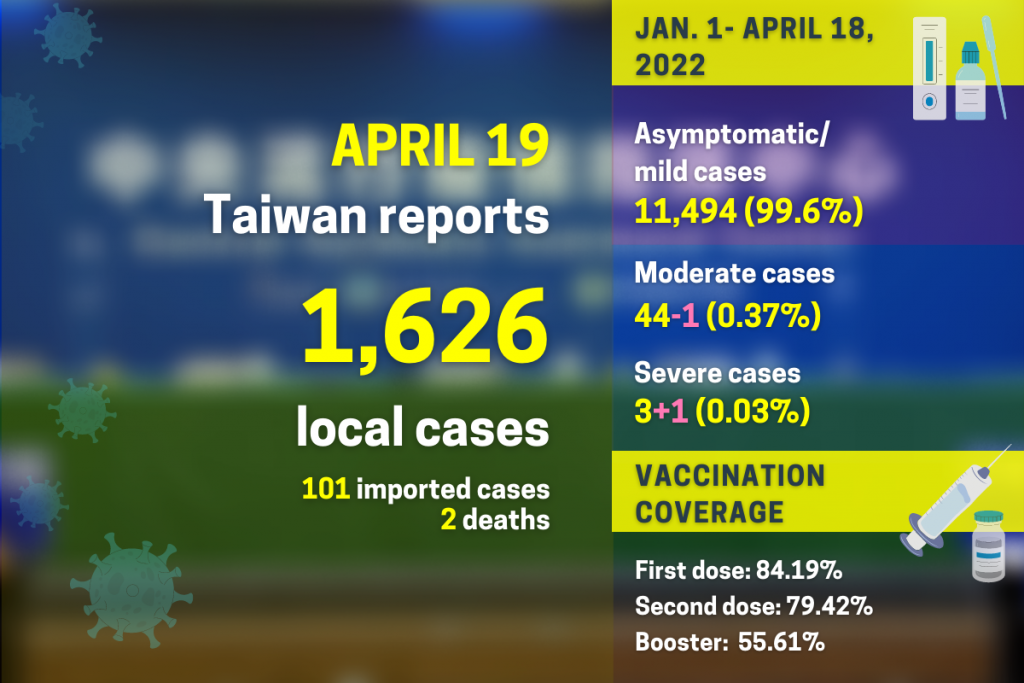 The local cases reported include 825 males and 801 females ranging in age from under five to their 90s, with the dates of onset ranging from April 1-19. Among Tuesday's cases, 800 were asymptomatic.

New Taipei City reported the largest number of cases with 583, followed by 287 in Taipei City, 197 in Taoyuan City, 148 in Keelung City, 74 in Hualien County, 64 in Kaohsiung City, 61 in Yilan County, 50 in Taichung City, 45 in Tainan City, 27 in Hsinchu City, 20 in Hsinchu County, 17 in Pingtung County, 12 each in Miaoli County and Changhua County, eight each in Yunlin County and Taitung County, four in Nantou County, three each in Chiayi County and Lienchiang County, two in Chiayi City, and one in Penghu County.

The 101 new imported cases include 42 males and 59 females ranging in age from under five to their 50s. Of these, 89 tested positive upon arrival at the airport and 12 during quarantine.

They arrived between March 8 and April 18 from China, the U.K., Australia, and the U.S. The country of origin of 97 cases is still being investigated.

The two deaths reported on Tuesday include a two-year-old boy and a man in his 90s. The toddler, case No. 31,552, was a resident of New Taipei City who had no history of chronic disease and had not been vaccinated.

The boy became ill on April 13, was diagnosed on April 15, and was admitted to an intensive care unit. Doctors intubated him and placed him on a ventilator as they administered steroids, immunomodulators, and Remdesivir. However, on Monday evening (April 18) he succumbed to sepsis and brainstem encephalitis brought on by the COVID infection .

The elderly man, case No. 30,297, had a history of cancer, heart failure, and chronic kidney disease. He had received three doses of the COVID vaccine but began experiencing symptoms of the virus on April 13.

He was diagnosed with COVID on April 14. An X-ray revealed that the man had pneumonia and he was treated with Remdesivir, but he died of acute renal failure caused by the COVID infection.

A total of 198 people have been removed as confirmed cases, while 14 cases are still under investigation. Up until now, 856 individuals have succumbed to the disease.