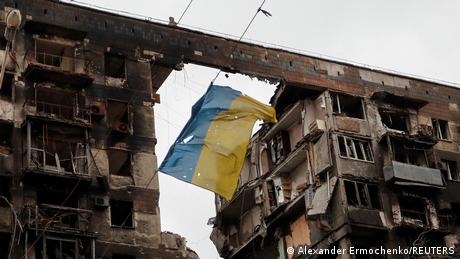 The EU is working on the next wave of sanctions against Russia which would affect the country's banking and energy sectors, EU Commission President Ursula von der Leyen told the Sunday edition of Germany's Bild newspaper.

This includes "smart mechanisms to allow for the oil to be included in the next step" of sanctions, von der Leyen said.

The measures would also target Sberbank, Russia's largest bank which alone comprises 37% of the nation's banking sector. The EU has already added Sberbank's chief Herman Gref to its sanctions list.

The EU official also said that Russia's bankruptcy was only a matter of time.

"Putin is destroying his own country and the future of his population with this war," she told the mass-circulation paper.

Zelenskyy called the situation "just inhuman," and said, "Russia is deliberately trying to destroy everyone who is there in Mariupol."

Russian forces claim the last remaining defenders of the city are now holed up in the Azovstal steelworks in the city.

Andres tweeted that staff was fine but shaken. He added, "Russian attacks must stop against civilian buildings and markets and churches and schools etc."

World Central Kitchen said it has now set up kitchens in 30 cities across Ukraine, supplying almost 300,000 meals a day.

Summary of events in Russia's war on Ukraine Saturday

Peace talks between Russia and Ukraine could produce two documents — one to be signed with Ukraine's partners and the other with Russia, according to President Volodymyr Zelenskyy. The one with partner countries would guarantee Ukraine's security, he told reporters.

After meeting Russia's Vladimir Putin earlier this week, Austrian Chancellor Karl Nehammer told US broadcaster NBC that the Russian president was "in his own war logic."

"I think he believes he is winning the war," Nehammer said.

Major General Vladimir Frolov, the deputy commander of the 8th Army, whose forces have laid siege to the southeastern Ukrainian port city of Mariupol, was buried in St. Petersburg.

Russian officials also published a video of what they say are sailors from the missile cruiser Moskva that sank two days ago. Ukraine says they hit the ship with a Neptune missile, though it sank while being towed to port.

The Russian Defense Ministry said it had destroyed buildings belonging to a production plant for armored vehicles in Kyiv.

The Swiss government has called on the International Olympic Committee (IOC) to exclude Russian and Belarusian officials from top posts in international sports federations. Minister of Sport and Defense Viola Amherd wrote in a letter that a measure to exclude the two countries' athletes from international competitions doesn't go far enough.