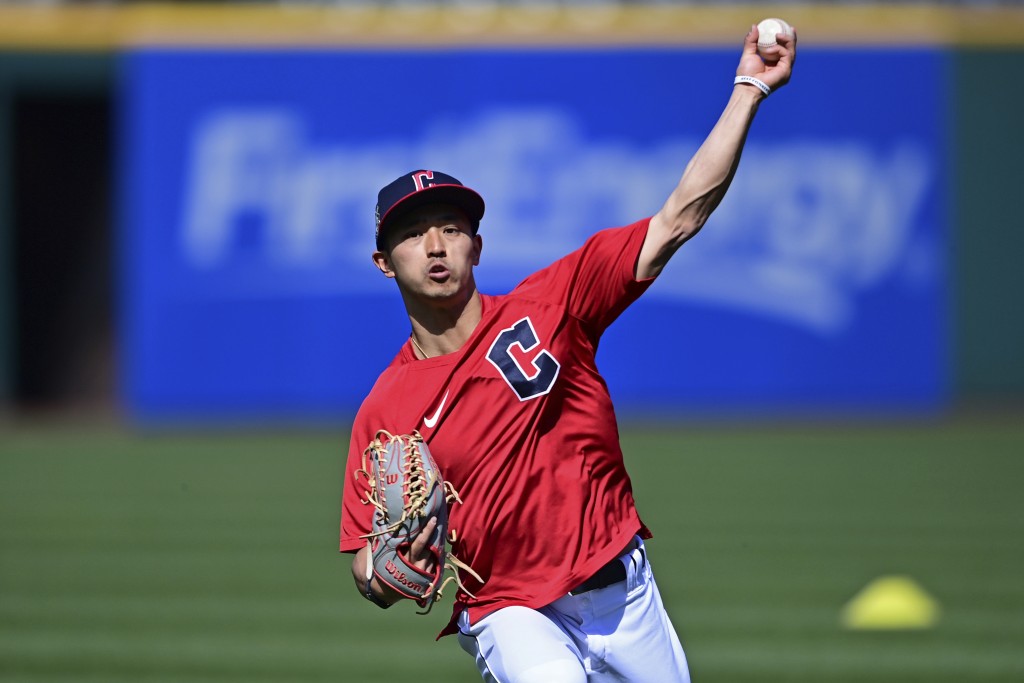 CLEVELAND (AP) — Walking down an unfamiliar hallway before Friday's home opener, Steven Kwan saw a sign indicating he had reached the interview room, so he pulled open the door and looked inside expecting a crowd.

“Pitch black,” he said with a smile.

It's the rookie's only misstep during an historic week.

The new name causing the biggest stir in Cleveland these days belongs to Kwan, a 24-year-old with a keen eye and knack for swinging and not missing.

He's the surprise of the baseball season so far. An unexpected hit.

Few players in the game's history have started their careers as strongly as Kwan, a fifth-round draft pick in 2018 from Oregon State who hit at a high level in the minors and won a roster spot with the Guardians this spring.

Kwan reached base 18 times in his first five games, the most for a player in that span since 1901.

Kwan also went 116 pitches before he swung and missed, the most of any player to start a career since at least 2000, according to the Elias Sports Bureau.

At the end of Cleveland's four-game series in Kansas City, the Royals gave Kwan third base after his first triple as a souvenir. He plans to give it to his parents.

“My mom is gonna be over the moon about that,” he said, glancing at the base. “I’m afraid when I get back home it’s gonna be like framed over their mantle. But I’m excited to have that kind of memorabilia for them.”

Based on his remarkable start, it might not be the last thing the Kwans proudly display in their Fremont, California, home.

Kwan's first week has been a blur, and at times, a little overwhelming.

Along with massive media exposure he could have never imagined, Kwan said people from his past have “come out of the woodwork” to connect with him in recent days. He's heard from family members and friends.

“I went to a private school from kindergarten to fourth grade, and somehow they found me,” he said. “I got some cousins who I hadn’t seen in a while who are now like 10 years old with Instagram and they’re DMing me, which is pretty cool.”

Kwan modeled his game as a youngster after Ichiro Suzuki, and his resemblance at the plate is uncanny.

Like the Japanese star, Kwan keeps his feet close together in the batter's box, holds his hands still and close to his chest and then delivers a high leg kick as the pitch approaches and he swings — just like Ichiro.

"I think it’s a coincidence it kind of ended up like that,” Kwan said humbly of the similarity.

Kwan prides himself on his ability to work deep into counts to either draw a walk (he's got eight already) or wear out a pitcher. Francona has slotted him in the No. 2 spot in the order, sandwiched between leadoff hitter Myles Straw and José Ramírez, also adept at making pitchers work.

“I’m just trying to be a pest, trying to be a good support of the other guys,” said Kwan, who grew up a San Francisco Giants fan. “It’s been pretty cool.”

Kwan's approach at the plate is rare for a young player, and refreshing in an age when home runs seem to matter most.

“He’s just got a good idea of what he wants to do,” Francona said. “He doesn’t get lost in all the exit velocity and launch angle. He just knows that if he’s on base, he’s doing something right.”

Francona has been impressed with how Kwan has handled all the early attention. And while it would be impossible for Kwan to sustain this incredible start, Francona believes he's here to stay.

“He’s really a grounded kid,” Francona said. "We’re six games in, but he looks like he can do some things to help you win. He plays the game, he’s pretty fundamentally sound, he swings at strikes.

“There’s a lot of things that lead you to believe that he can be pretty good. ”