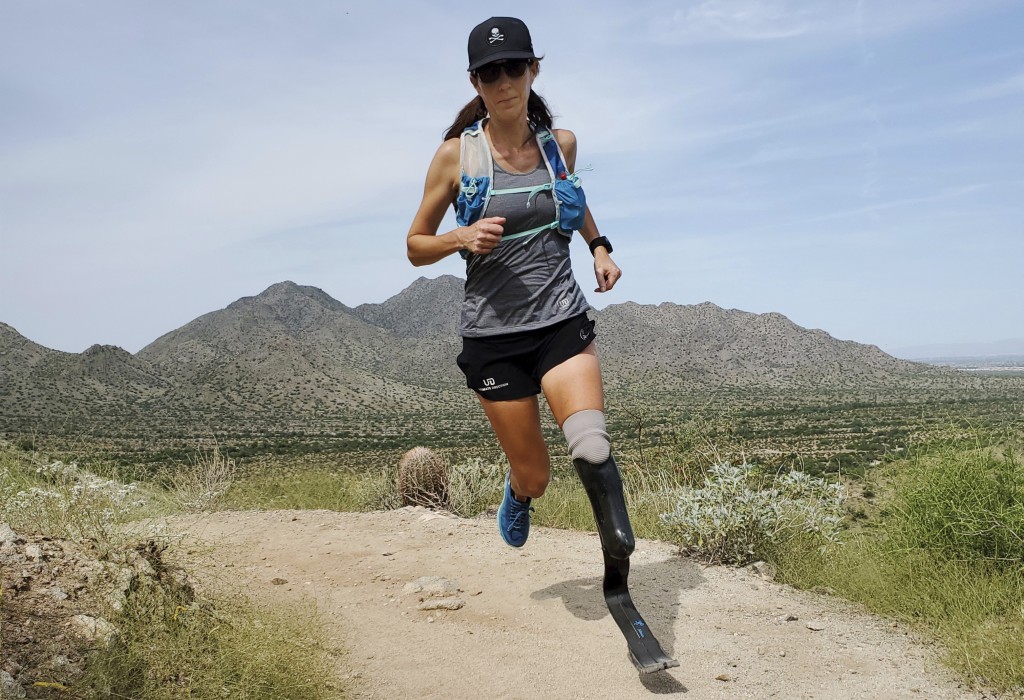 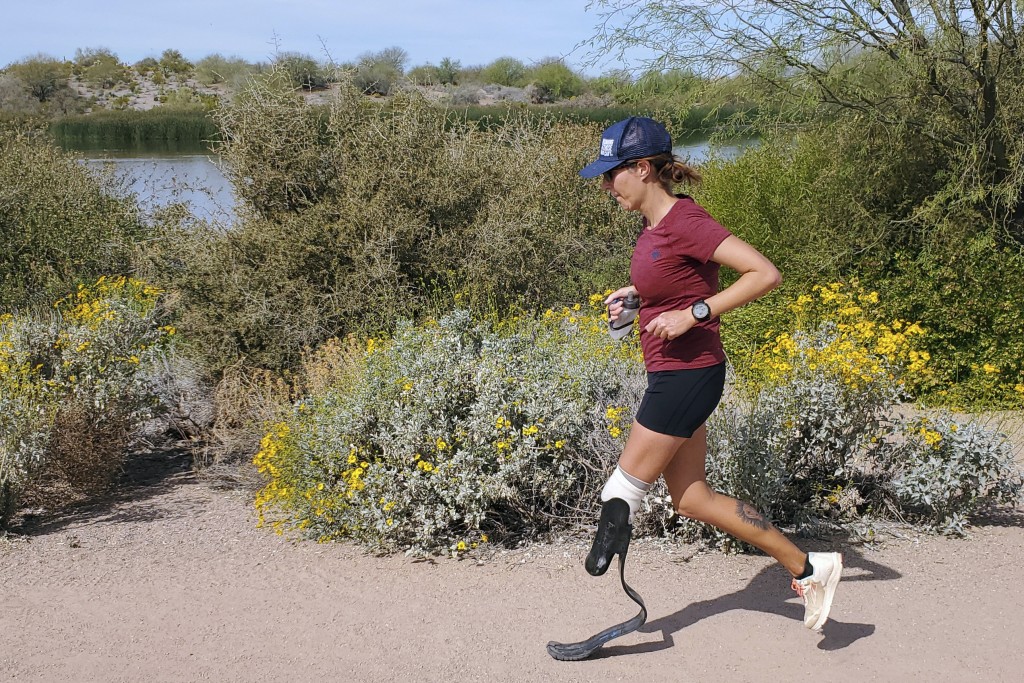 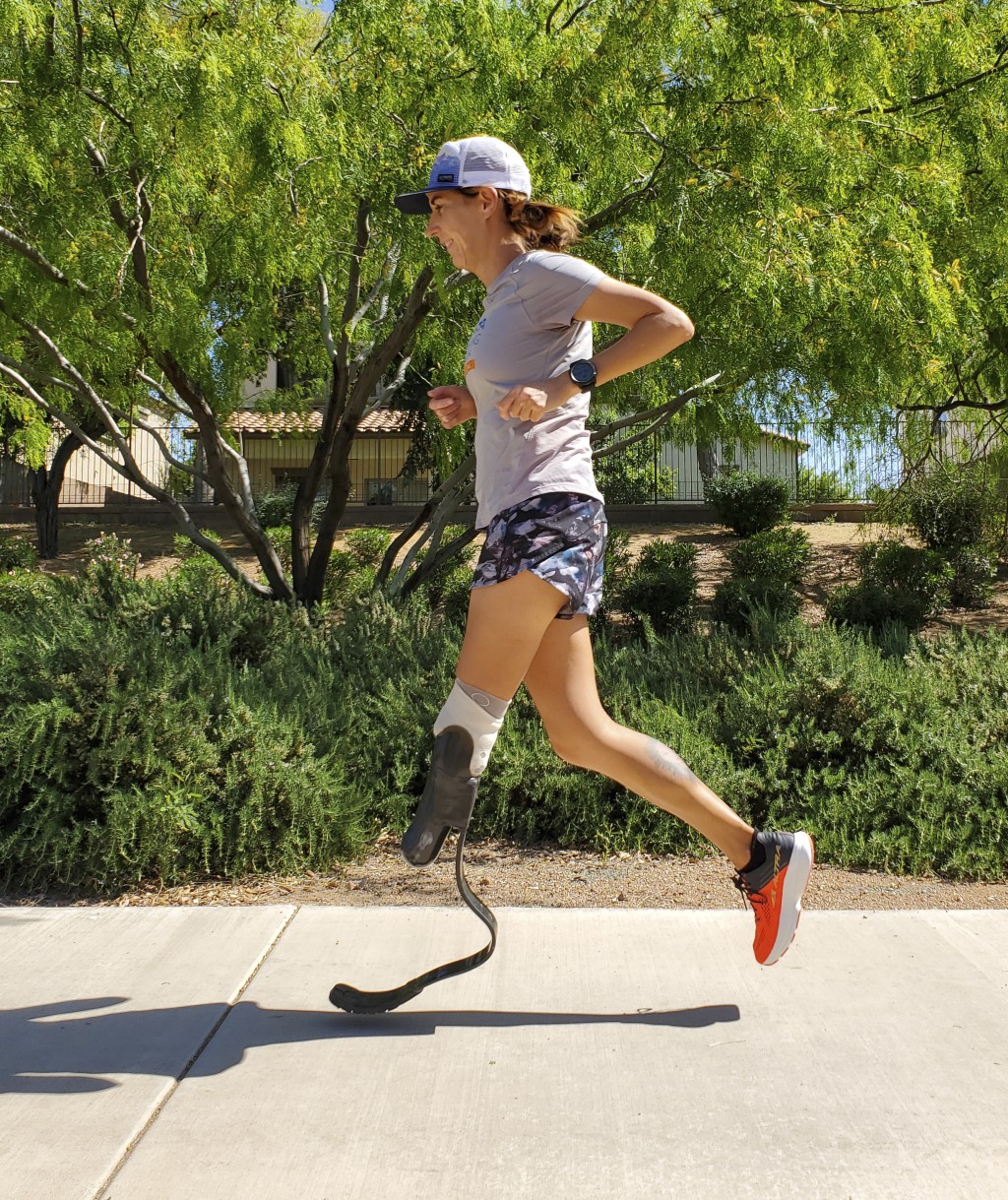 BOSTON (AP) — Jacky Hunt-Broersma runs like a woman possessed. And in a way, she is: The amputee athlete is trying to run at least 102 marathons in 102 days.

Last month, a little more than two-thirds toward her goal of setting a new world record for back-to-back marathons, the South Africa native posted something on Twitter that got people talking.

“The first thing I did after my run today was take off my leg. Felt so good,” she tweeted. “Marathon 69 done. 31 marathons to go.”

That was last month, and she's still running — covering the classic 26.2-mile (42.2-kilometer) marathon distance day in, day out, rain or shine, occasionally on a treadmill but mostly on roads and trails near her home in Gilbert, Arizona. If her streak remains intact heading into the Boston Marathon on April 18, it'll be marathon No. 92.

Unlike the 30,000 others running the storied course, Hunt-Broersma, 46, will have done a marathon the day before. Somehow, she'll have to rally body and soul to run another the day after. And another after that. And then eight more.

All on a carbon-fiber blade that's been her left leg ever since she lost the real thing below the knee to a rare cancer.

“You make peace with pain,” she said in an interview with The Associated Press. “I think my pain threshold is probably quite high at the moment. It's one step at a time.”

Boston is the only certified marathon she's including in her quest. The others she's running on one of two loops near her home or indoors on a treadmill — a monotonous machine many runners derisively call the “dreadmill.”

In 2001, while she and her Dutch husband were living in the Netherlands, Hunt-Broersma was diagnosed with Ewing sarcoma, a rare cancer more typically seen in children. Overnight, a golf ball-sized bulge appeared on an old scar that had become tender. A biopsy confirmed the worst, and within weeks, her leg was amputated below the knee.

“The biggest struggle was accepting that part of my body was gone,” she said. (She's since made peace with that: A favorite T-shirt reads, “A Zombie Chewed It Off.”)

Until five years ago, she wasn't at all athletic, but getting started was expensive. Carbon-fiber blades designed for running cost around $10,000 and aren't covered by health insurance. Survivors of the 2013 Boston Marathon bombing, which killed three spectators and wounded 260 others, ran into the same problem when they sought to reclaim their lives.

“Running really changed my life,” she said. “It helped me accept myself as an amputee. It gave me a sense of freedom. I fell in love with the process of pushing my body further just to see what I could do.”

Subsequent marathons led to ultrarunning over extended distances, including a 100-mile (160-kilometer) race. So when Hunt-Broersma learned that Alyssa Amos Clark, a nondisabled runner from Bennington, Vermont, covered the marathon distance 95 days in a row in 2020, an idea was born: She’d do 100. That plan got foiled this week when British runner Kate Jayden completed 101 marathons in as many days, so Hunt-Broersma has a new goal: “Now I'm going for at least 102.”

“I hoped it would inspire a lot of people to get out of their comfort zone and push a little bit farther,” she said.

She worried her stump would become raw and painful, and the first two weeks were rough. Since then, though, she’s gotten into a sustainable rhythm, taking care to ice and massage the stump. When it became swollen, she switched to a running prosthesis with a little more room.

But there have been mental challenges as well on the road to 102, which began on Jan. 17. On a recent outing, Hunt-Broersma — who's been averaging a little over five hours per marathon — felt near collapse at 15 miles (24 kilometers) and burst into tears. Suddenly the entire odyssey was in doubt.

“I had a total emotional breakdown. I was like, ‘I just can’t do this. What was I thinking?’” she said. “The trick for me is just to break it down into little goals. Just get to the next mile. And then the next one.”

Her support team is her husband and their two young children, but she's also gained a large social media following.

This week, after logging marathon No. 85, well-wishers offered virtual applause. “You just seem to eat marathons for breakfast,” one person tweeted. “In such bleak times, thank you for serving as an inspiration,” commented another.

As she nears the end of her epic quest, Hunt-Broersma hopes she inspires a singular thought in others, regardless of their own physical challenges:

“You’re stronger than you think — and you’re capable of so much more.”

This story has been corrected to show that Alyssa Amos Clark set her world record for 95 consecutive marathons in 2020, not 2000.