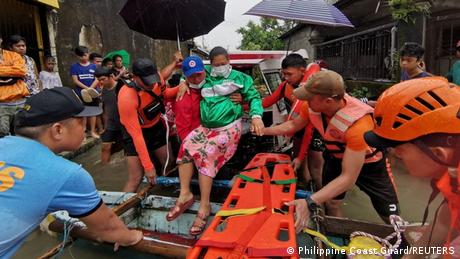 The Philippine military on Thursday pledged to keep up search and rescue efforts in the wake of tropical storm Megi that made landfall last Sunday. Officials said 123 people were known to have died so far.

Dozens remain missing as soldiers continue their searches on the storm-prone archipelago of more than 7,600 islands.

Some 240 people were injured after heavy rainfall triggered landslides and flooding in central and southern Philippines, officials said.

More than 162,000 residents were evacuated to emergency centers, and another 41,000 moved in with relatives, according to data from the government.

At least 86 people died in villages around Baybay city in the central province of Leyte, which is among the regions most badly affected by tropical storm Megi, the city government said in a report.

The report added that 236 people were also injured in the areas around the city, which is mountainous and quite prone to landslides.

At least 117 people were still missing in and around Baybay, local authorities said.

Some 26 people died in Abuyog municipality of Leyte province, with another 150 people still missing, authorities said.

Many people had hiked up the mountains to avoid flash floods, but intense landslides swept them away.

Kantagnos district in Leyte was also "greatly devastated," one of the Engineering and Construction Battalion units of the Philippines army said on Facebook.

"Homes and livelihoods have been damaged, families and individuals are missing and communication have been unstable," it said in a post.

The Philippines' National Disaster Emergency said that the total cost of devastation of houses, crops and infrastructure amounted to 137 million pesos approximately, or $2.6 million (€2.4 million).

Aerial photographs from the local government showed the extent of damage unleashed by the storm — collapsed slopes, buried houses and coconut plantations.

Megi made landfall on Sunday, but has subsided since. It was one of the first tropical storms of the year to have battered the island nation, which sees roughly 20 tropical storms every year.

The storm came after apowerful typhoon in December slammed the island country and killed more than 400 people.