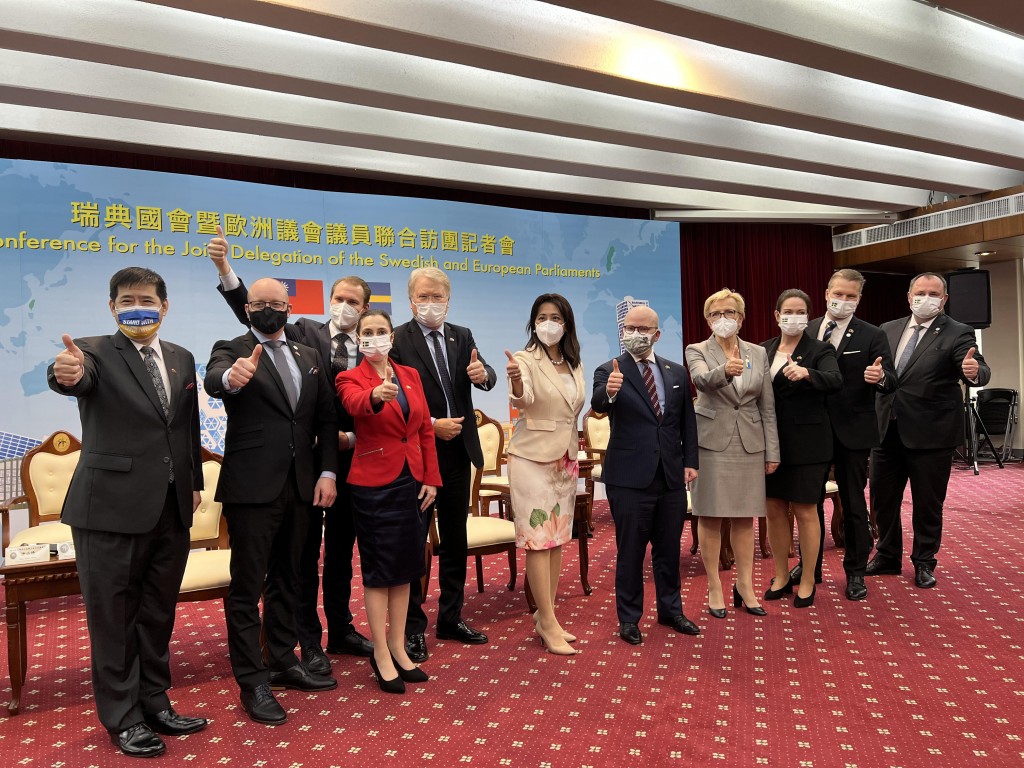 During a press conference organized by the Ministry of Foreign Affairs, Swedish-Taiwanese Parliamentarian Association Boriana Aberg said the trip was “very fruitful” and was intended to learn more about the country. She called for more exchanges, particularly in academia.

Aberg also mentioned that a Mandarin language school recently opened in Belgium and said Taiwan should establish one in Sweden as well.

Swedish member of the European Parliament Charlie Weimers said the trip was a “signal of support from Europe to Taiwan” and that it serves as a deterrence factor. The visit demonstrates to Beijing “that we over in Europe know about Taiwan and care for Taiwan,” he added.

With regard to military cooperation, Weimers said the war in Ukraine “shows a need for stockpiling defensive weapons.” He said Europe should come together and, with the help of the U.S., assist Taiwan in preparing for a regional conflict.

Apart from potentially providing military weapons, the MEP said there is a need for mil-to-mil cooperation. He suggested that since Sweden and Finland both have a conscription system and Taiwan is currently reforming its own conscript training, the three nations could find a way to work together and learn from one another in this aspect.

Weimers said he believes the EU would take a strong stance against China in the event of a cross-strait conflict. He added that Europe would have to improve its supply chain resilience in order to be tough on China and “still be able to put food on the table.”

Praising the visit as a “manifestation of democracy,” Swedish parliament member Lars Adaktusson said that it is important to emphasize the need for protecting values like democracy, human rights, human dignity, and freedom of press, that Sweden shares with other like-minded countries.

Adaktusson added he believes Europe will take concrete actions against China if it attacks Taiwan. However, he said that if the EU could not do so, then it would be “the end of its foreign policy.”

The politician said Taiwan is gaining support, while China is losing support internationally. He also mentioned that next week, the Swedish Parliament will be deliberating on possibly renaming Sweden’s representative office in Taipei to “House of Sweden” to demonstrate the Nordic country’s desire to further deepen bilateral ties.

He explained that this move would not only promote business exchanges but also political ones. He said relations between Taiwan and Sweden are a matter between the two countries and that no other nation can dictate how bilateral ties are conducted.

Swedish Parliament Deputy Speaker Kerstin Lundgren said that when she received a threatening letter from the Chinese ambassador telling her not to visit Taiwan, it only doubled her resolve to go.

Following the Russian invasion of Ukraine, Lundgren said, “We have to rethink and rebalance our positions … There are lessons to be learned and conclusions to be drawn.” She added that Sweden needs to consider Taiwan’s position as well in order to come up with an appropriate strategy to bolster bilateral ties.

The group attended two banquets, one hosted by You and the other by Wu.

Aberg was awarded the Friendship Medal of Diplomacy by Wu for her contributions to promoting Taiwan-Sweden relations.