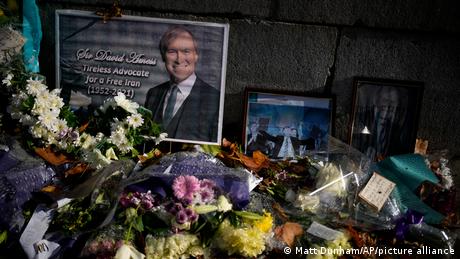 A British court on Wednesday sentenced a follower of the extremist Islamic State (IS) group to life in prison for killing lawmaker David Amess last year.

The sentence — a whole life order without the possibility for parole — came after a London jury unanimously found the man guilty of the crime, the second murder of a British parliament member in five years.

"This is a murder that struck at the heart of democracy," presiding Judge Nigel Sweeney said at London's Old Bailey courthouse, adding that the 26-year-old defendant had shown "no remorse or shame."

In a statement, Amess' family said it felt "no elation" over the sentencing, and that there could be no compensation for the "appalling and violent manner" in which Amess had been killed.

"We will struggle through each day for the rest of our lives," the family said.

What motivated the attack?

The defendant told investigators that he killed Amess in revenge for votes in parliament supporting airstrikes in Syria in 2014 and 2015.

He attacked Amess with a foot-long carving knife and stabbed him 20 times as the Conservative lawmaker met constituents in a church in Essex, southeast England, last October.

After researching several MPs and even considering going to Parliament to carry out an attack, the assailant had settled on Amess, a 69-year-old father of five who had been an MP from 1983 until his death.

Faking his identity and tricking the MP's secretary into securing a meeting with Amess, the 26-year-old then stabbed the lawmaker.

During his interrogation and trial, the assailant, who is from a Somali family, accepted the evidence against him. Jurors were told he did not suffer from mental health issues.

The university drop-out became self-radicalized in 2014 and considered traveling to Syria before settling on a terror attack in Britain.

How safe are UK's MPs?

Amess' killing followed the murder of Labour MP Jo Cox in 2016 when a far-right extremist attacked her before a constituent meeting. Her attacker, is also serving a whole-life sentence.

The two recent attacks have prompted calls for better security for the UK's elected representatives.

Parliament member Mike Freer, who was also a potential target selected by Amess' attacker, said at the sentencing that he and his staff would now wear protective vests and alarms at constituent meetings.