TAIPEI (Taiwan News) — A 1945 tombstone bearing an English inscription and speculated to belong to a British prisoner of war has reportedly been stolen.

An on-site inspection to determine whether it has any cultural heritage value was scheduled for Monday (April 10).

Due to a road construction project that is about to take place on Fude Street in Taipei’s Xinyi District, the city’s Mortuary Services Office (MSO) issued an advance notice on Jan. 27, stating the 30 graves located within the construction site will be relocated to a columbarium on Yangmingshan if they are not moved to other locations by the descendants of the deceased by April 30, CNA reported.

Members of the public spotted a gravestone with the name of the deceased and the date of death inscribed in English. The headstone is speculated to belong to a POW who died at the end of WWII, according to CNA.

Having conducted an investigation into the tombstone, Chang Wei-bin (張維斌), a military historian, said the grave belongs to British POW Clack, Eric Arthur or Clack, Erec Arthur. He added that there are two gravestones similar to the stolen one nearby, but they are badly weathered.

Members of the public have sent information related to the English tombstone to the city’s Department of Cultural Affairs (DCA) to apply for an evaluation of the marker’s cultural heritage. However, a Facebook group dedicated to the study of ancient tombs posted a photo of the tombstone with a caption claiming it was stolen.

DCA official Lai Yu-wen (賴郁雯) told CNA on Sunday that the department had notified the MSO to temporarily halt the graves’ relocation and notified the New Construction Office to check the condition of the gravestones at the site. With regard to the tombstone being stolen, she said the department will ask for the police department’s assistance.

Lai pointed out that whether the tombstone has any cultural heritage value can only be assessed by what remains on-site. She added that the information provided by the public will be given to cultural heritage assessment committee members and that if the stele is determined to belong to a WWII POW, it would be the first case of its kind in the city’s history, per CNA. 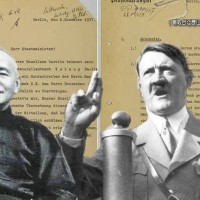