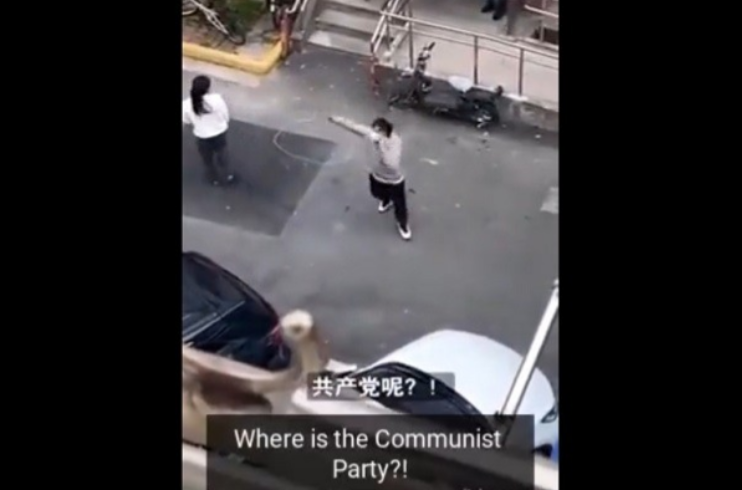 Around 25 million people remain under a draconian lockdown in Shanghai with over 21,000 new COVID cases reported for Thursday. The lockdown has drastically affected people's access to food and medical care, with videos showing chaos during food handouts, riots on the streets, the culling of pets, and squalid conditions in quarantine facilities.

South African YouTuber Winston Sterzel uploaded a video on Chinese social media showing a resident of Shanghai screaming about the Shanghai city government because of his desperate situation under lockdown. The video quickly went viral due to the raw intensity of his emotions and his fearless criticism of the Chinese Communist Party (CCP).

In the video, a man can be seen furiously pacing and shouting into a cell phone in an alley in a residential area of Shanghai. He starts by screaming that the supermarket is closed, leaving him with no way to buy food or beverages, and declares that the government lockdown is "driving people to death!"

He yells that he is in Shanghai's Putuo District and that his household is registered in Xuhui District. He claims that his parents have been "locked up by you for two months!"

The man says that as a result of the lockdowns, his grandmother is living alone with no one to care for her. He then questions the humanity of the Shanghai authorities and warns that it is "driving people to revolt!"

Exasperated, he switches to Shanghainese to say the situation has become desperate and that the government is "not doing anything at all." He adds that his supplies are exhausted and that he has spent all his money.

The man explains that he runs a small business and that his employees have no income. He points out that he has a mortgage to pay and that it is due in two days.

He then curses the CCP and asks why it seems to have abandoned ordinary people. In an apparent response to an announcement about the extension of the lockdown, he points out that it was originally supposed to end on April 5 and accuses the government of lying to the people.

The video ends with the man questioning how the average citizen is supposed to survive such strict lockdown measures.

The human cost of this awful lockdown is unfathomable, people are being driven to the brink, the mental health cost is immeasurable, this man sums up how many are feeling at the moment pic.twitter.com/0kBGPwiNEE