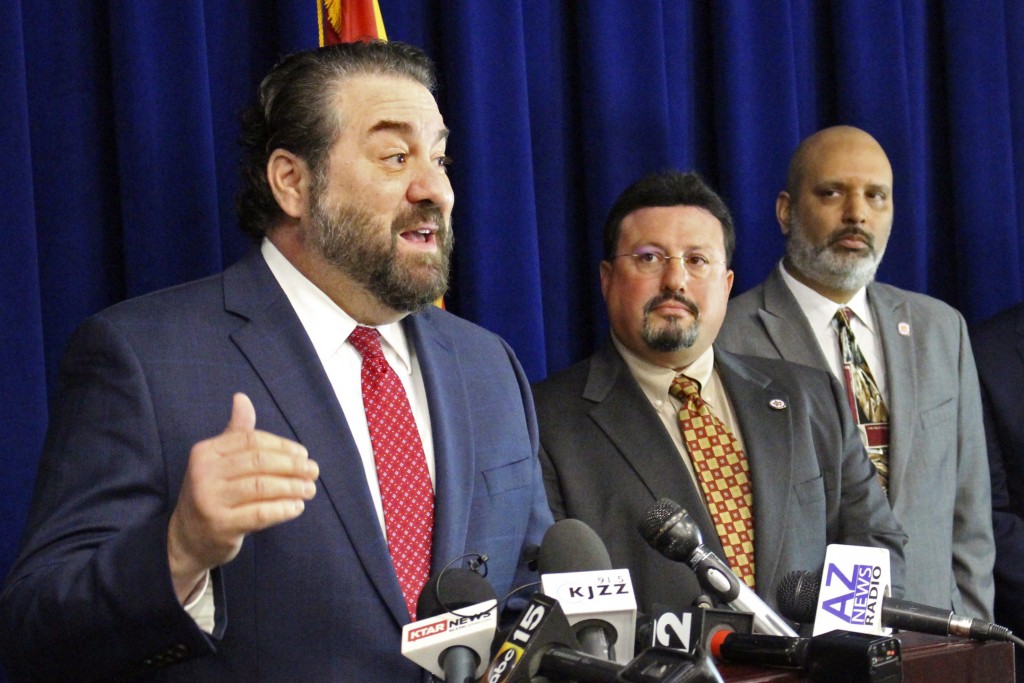 PHOENIX (AP) — Arizona’s Republican attorney general issued an interim report Wednesday on his review of the 2020 election in Maricopa County that outlined his concerns with some election procedures but did not provide proof of any major issues despite six months of investigation.

Brnovich is courting Trump's endorsement for his Senate run, which would give him a significant boost in a field with no clear Republican frontrunner to take on Democratic Sen. Mark Kelly.

Arizona has been ground zero by efforts by Trump and his allies to find proof for their claim that Trump's narrow loss here was marred by fraud. The former president has vented repeatedly about the pace of Brnovich's review of the 2020 election and said people are questioning whether the attorney general “is up to doing the right thing.”

In Wednesday's 12-page letter addressed to Republican state Senate President Karen Fann, Brnovich said some of the forms documenting the transportation of ballots were missing signatures or other information. The issue has been widely discussed among Trump supporters who falsely claim the election was stolen from him, but there has been no evidence produced of tampering, and Brnovich didn't offer any.

He also contends a drop in the number of ballots with rejected signatures between 2016 and 2018 and again in 2020 warrants scrutiny. Be he rightly noted that the law was changed for 2020 to give voters five days after the election to fix any problems.

Brnovich also complained that county officials have been slow in responding to his requests for information. County officials have previously said they're cooperating but also have to focus on conducting local elections while gathering the extensive array of documents Brnovich has requested.

He asked the Legislature to give him subpoena power to force county officials to promptly give him documents he requests, and added a list of recommendations for tightening election procedures.

“The Attorney General’s interim report about the 2020 election in Maricopa County includes no new evidence, nothing that would have changed the results, and nothing that should lead people to question the overall health of our electoral system,” Maricopa County Recorder Stephen Richer and Board of Supervisors Chairman Bill Gates, both Republicans, said in a statement. The recorder and board jointly oversee elections in the county.

They noted that Brnovich didn’t address several debunked claims made by Trump allies, including that the election computers were connected to the internet and data was illegally deleted.

Fann called the report “a historic day for voter integrity in Arizona."

“We’ve wanted an entity with prosecutorial authority to validate the missteps our audit revealed, and this interim report does just that,” she said. “The AG’s findings of failures, fraud, and potential misconduct during the 2020 election in Maricopa County are not surprising, given the lack of compliance and cooperation Maricopa County elections officials displayed from the start."

Brnovich’s letter to Fann said his election integrity unity “has uncovered instances of election fraud by individuals who have been or will be prosecuted for various election crimes." But none of the prosecutions in Arizona have anything to do with how the election was managed, and none reveal any instance of malfeasance by public officials or election workers.

The attorney general has acknowledged filing criminal charges against nine people across the state for voting crimes stemming from the 2020 general election, where more than 3.4 million ballots were cast. Of those cases, just two were in Maricopa County and both involve people who illegally completed the ballot of their parent, who died shortly before the election.

One woman awaits sentencing on a reduced felony charge, and the other already has completed probation she received after pleading guilty in December. Brnovich’s office revealed that case on Wednesday, but did not say how the crime was discovered. The first case came to light after a citizens group scoured lists of recently deceased people who may have voted and handed it over to the attorney general.

Also Wednesday, the attorney general announced that a woman in southern Arizona’s Cochise County had pleaded guilty to voting her dead mother’s ballot. Under a plea agreement, the woman will be sentenced to probation and could receive up to 60 days in jail on a low level felony that could be reduced to a misdemeanor.

Following an extensive internal review of its election, the Maricopa County Elections Department turned over to Brnovich in January 38 cases of potential voter fraud it uncovered while reviewing its 2.1 million ballots from the 2020 general election. They included five people who may have voted in more than one county and six who may have voted twice in Maricopa County. The county also located 27 voters who may have died before their ballots were returned in the mail.

Death records are automatically sent to state and county election officials so their voter registrations can be canceled, but if they happen within two months of an election it is possible a relative can return their mail ballot envelope. That’s what happened in most of the cases The Associated Press has tracked from the 2020 election. The other charges are from felons allegedly voting.

Since then, just a handful of new criminal cases have been filed.