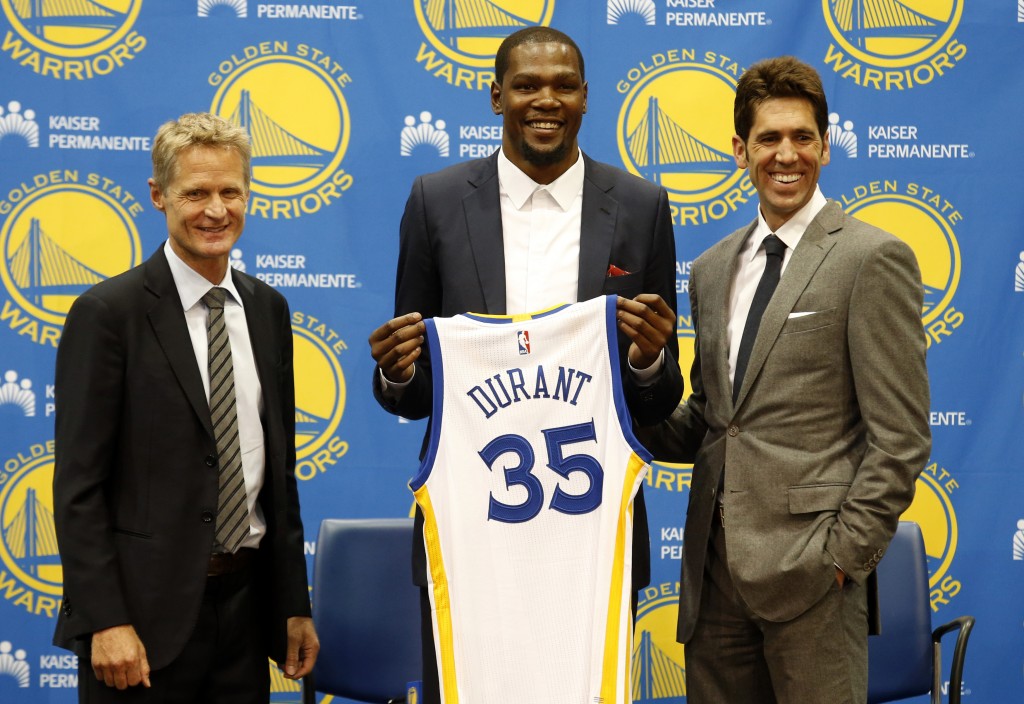 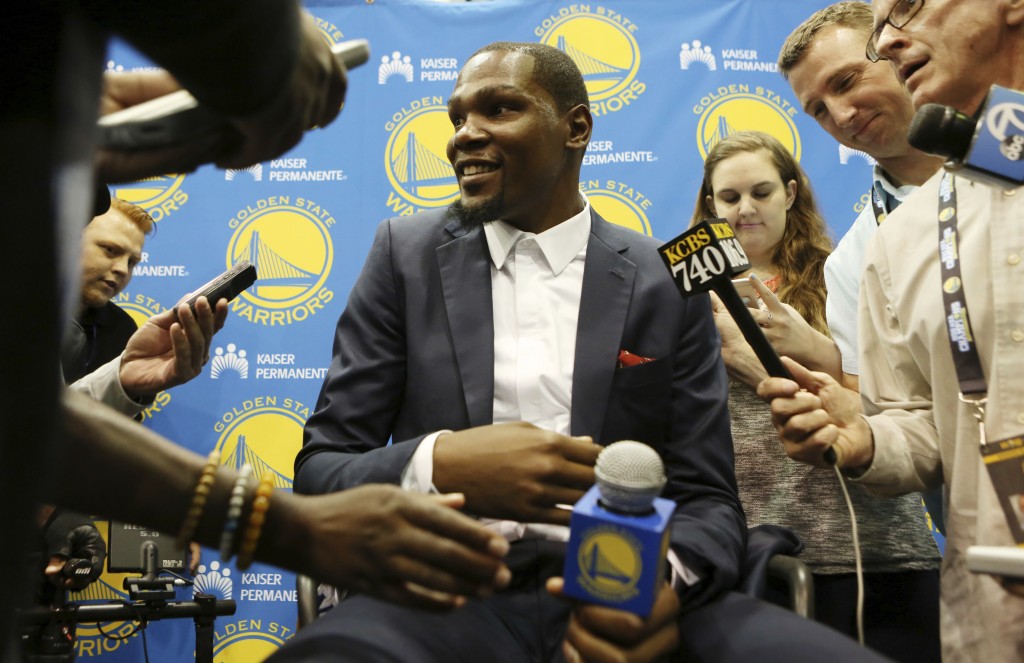 Four-time scoring champ Kevin Durant decides to leave the Oklahoma City Thunder and join the Golden State Warriors. His decision to join the Splash Brothers and a team that just set the NBA record with 73 wins last season sent tremors through the league. Players and executives throughout the league immediately started to contemplate how the newest super team would alter the landscape. The Associated Press is republishing verbatim the story of Durant's decision on July 4, 2016.

Kevin Durant’s decision to join the Warriors on Monday sent tremors through the NBA, and players and executives throughout the league immediately started to contemplate how the newest super team would alter the landscape.

The Warriors already were a super team before one of the league’s most unstoppable scorers decided to leave Oklahoma City for the Bay Area. Golden State won the championship in 2015, rolled to a regular-season record 73 victories last season and came within one game of back-to-back titles when they lost to the Cleveland Cavaliers Game 7 of the NBA Finals.

Now they have added the player who nearly eliminated them a round earlier.

Though not everyone is anointing them next year’s champions.

“Everyone is so hyped up on the matchup problems on the offensive end? They still gotta come down the other end,” Pistons All-Star center Andre Drummond tweeted. “Not a very big team.”

While there, he helped lead the Thunder to the Western Conference finals four times and to the NBA Finals in 2012, where they lost to the Heat, another super team formed when LeBron James and Chris Bosh joined Dwyane Wade in Miami.

Durant himself spoke out negatively about creating super teams when James made his decision in 2010.

But after the Thunder could never get to the top of the mountain with Durant, Russell Westbrook and Serge Ibaka — and even though they had the Warriors down 3-1 in the conference finals — Durant opted to head west.

When James left Cleveland for Miami, stars such as Michael Jordan, Charles Barkley and Magic Johnson were critical of the decision to join forces with players he had competed against.

“There’s no way, with hindsight, I would’ve ever called up Larry (Bird), called up Magic and said, ‘Hey, look, let’s get together and play on one team,’” Jordan said in 2010. “But that’s ... things are different. I can’t say that’s a bad thing. It’s an opportunity these kids have today. In all honesty, I was trying to beat those guys.”

“Somebody beat you! And you go there... ?” Nurkic tweeted. “Superstar not doing that man.”

While Durant has never been too concerned by outside opinions, his decision may also have ramifications on the NBA’s collective bargaining negotiations.

During the last lockout, the owners pushed to make changes to the agreement so that teams, especially those in smaller markets, would have a bigger advantage in retaining players.

Commissioner Adam Silver has said in the past that those changes were effective, but the influx of new money into the system this summer from the league’s new $24 billion television contract, and Stephen Curry’s bargain contract that was negotiated when he was struggling with ankle injuries, conspired to give the Warriors enough wiggle room to spend $54 million on Durant.

The league and the players’ union can opt out of the current CBA this year, and both sides have been negotiating to try to avoid another work stoppage.

One of the biggest talking points Silver has been making over the past six months is the league’s continued push for more parity.

“The intention wasn’t that in this system that teams could sign, without going above the tax, that many max player contracts and that many All-Stars,” Silver said during All-Star weekend in Toronto.

“So if you ask me from a league standpoint, we would prefer that our All-Stars be distributed around the league rather than having so many All-Stars in one market. But we’ll see what happens this summer.”

The summer is here, and so are the Warriors, who still have work to do.

The Heat went 2-2 in the finals during the James, Wade and Bosh era, including a loss to the underdog Dallas Mavericks in their first season together. When James went back to Cleveland to team up with Kevin Love and Kyrie Irving, the Cavaliers lost in the finals their first year before winning this season.

And everyone remembers the Los Angeles Lakers falling short both in 2003-04 — when Gary Payton and Karl Malone joined Kobe Bryant and Shaquille O’Neal to chase a title — and even more spectacularly in 2012-13 when Dwight Howard and Steve Nash came to town.

This time appears to be different, with all four of Golden State’s All-Stars aged 28 or younger and squarely in their prime.

And only so much money, as odd as that sounds this summer.

So the Warriors have agreed to trade Andrew Bogut and will likely have to jettison Harrison Barnes — two important cogs for them the past two seasons — and will rely on several minimum salary veterans to fill out the roster for depth.

They will also face a crush of attention and many hoping they fail.

Warriors forward Draymond Green no doubt understands this, and got straight to the point with Durant in his first message to him on Twitter:

“Block out the noise.”