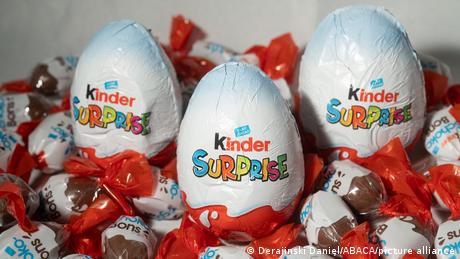 With Easter less than two weeks away, the Italian manufacturers of Germany's beloved Kinder Surprise Eggs announced a recall Tuesday on some batches of the product along with various other children's chocolate products.

The precautionary recall is due to the possibility of a link with a salmonella outbreak originating in the UK that has left mostly young children ill. The number of cases of salmonella in the UK has risen to 63 with the median age of those getting sick under the age of five.

France has also announced a recall on similar products.

According to Ferrero, all items being recalled were manufactured in the same facility in the Belgian town of Arlon. Chocolates from the factory were sent on for sale in Belgium, France, Germany, Sweden and the UK.

Salmonella is a common food-born illness that can result in diarrhea, fever and stomach cramps.

What products in Germany are being recalled?

In Germany, batches of three-pack Kinder Surprise Eggs with a best-before date between April and June of 2022 are being recalled.

Additionally, the Kinder Surprise Maxi (100 grams), Kinder Mini Eggs (100 grams) and Children's Mix packs containing any of the items above with a best-before date between August and September 2022 are also subject to the recall.

What happened in France?

Health authorities in France also announced a recall of products there after 21 were sickened, 15 having consumed the products being recalled.

The company told AFP that while none of its products had been proven to have a link to the salmonella outbreak, it was announcing the voluntary recall on several hundred tons of products as a precaution.

In a statement on its French website, the company said, "None of our Kinder products put on the market have tested positive for salmonella and we have not received any complaints from consumers."