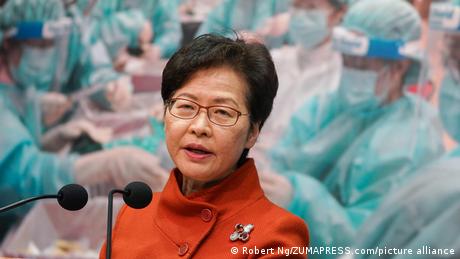 When she was elected as Hong Kong's first female chief executive in 2017, Carrie Lam pledged to work with the public to achieve "real consensus and gain the widest support from society."

And yet, according to a poll released by the Hong Kong Public Opinion Research Institute (PORI) in March, Lam's approval rating currently stands at 26.6%. Her popularity nosedived to 18% in February 2020, the lowest level among all four chief executives who have held the post since control over the territory was handed back to China from the United Kingdom in 1997.

After announcing her decision to not run for reelection on Monday, Lam cited the desire to spend more time with her family as the reason. Many experts, however, think it is a result of Beijing's disapproval of her performance over the last five years. "I believe the most crucial thing is that Beijing does not support Carrie Lam's reelection," said Kim-Wah Chung, deputy chief executive officer of PORI (Hong Kong Public Opinion Research Institute).

"Carrie Lam's handling of the anti-extradition bill protests in 2019 has been very disappointing, and it has cost Beijing a lot in terms of its prestige in the hearts of Hong Kong people. I believe this is something that Beijing is also well aware of," he added.

During the press conference on Monday, Lam said she will conclude her 42-year career in the Hong Kong government on June 30, emphasizing that the Chinese authorities understood and respected her choice not to seek another term.

In 2019, the extradition bill proposed by Lam — which would have allowed criminal suspects to be extradited to mainland China — set off months-long protests across Hong Kongas millions of the city's residents took to the streets to oppose the legislation and young protesters clashed with police.

The unrest ultimately led to the Chinese government's decision to come up with a national security law for the territory in 2020, ushering in a new wave of crackdowns on civil society, with many activists and opposition figures detained in jail and pro-democracy media organizations forced to shut down. Tens of thousands of Hong Kong residents have also left the city since.

Lam's management of the COVID pandemic this year is viewed by many experts as the last straw that broke the Chinese government's trust in her. Since February, hundreds of thousands of cases have been reported in Hong Kong, and the city's COVID-19 mortality rate has become one of the highest in the world. Indeed, on March 17, Hong Kong reported the highest number of COVID-19 deaths worldwide in proportion to its population, according to the British Medical Journal.

"Chinese President Xi Jinping has raised his concern on the situation of the pandemic in Hong Kong, saying that the Hong Kong government has to bear responsibility for that," said Ivan Choy, a political scientist at the Chinese University of Hong Kong (CUHK). "Since then, I think everyone in Hong Kong thought the chance for Lam to get reelected was becoming smaller."

According to Choy, this is similar to the political pattern in China, where dozens of local officials have been removed from their positions after they failed to contain local COVID-19 outbreaks. "For provincial heads or mayors in China, when they can't handle the pandemic, they have to step down," he told DW.

Other experts say that Carrie Lam's poor track record over the last few years meant that even if the Chinese government struggles to find credible candidates in the upcoming chief executive election on May 8, the possibility of Lam getting the approval to run for a second term is remote.

"Lam's persistent demonstration of incompetence, most recently over the management of the COVID outbreaks, meant that even with difficulties to find a credible candidate, Lam is not considered for a second term," said Steve Tsang, Director of the SOAS China Institute at the University of London. "Lam no doubt made the announcement after consulting Beijing."

Who could be Carrie Lam's successor?

There is no obvious successor to Lam on the horizon for the May 8 ballot, which was postponed for six weeks due to the recent surge in COVID cases. Hong Kong's chief executive is elected by a 1,500-member election committee, including lawmakers, representatives of various industries, as well as pro-Beijing representatives such as deputies in China's parliament.

Local media has reported that the city's chief secretary John Lee, who was Hong Kong's security chief during the 2019 protests, is one of the frontrunners. Another possible contender is Hong Kong's financial secretary Paul Chan.

According to Ivan Choy from CUHK, the Chinese government may put more emphasis on national security in the next five years, meaning Beijing would probably favor someone with a background in that area.

However, if Beijing wants to improve the relationship between the government and the Hong Kong people, as well as to relaunch the city's economy, they may choose a more popular choice, such as Paul Chan.

'Loyalty to Beijing' most important factor

"The choice of the chief executive would reflect Beijing's priority for Hong Kong in the next five years," Choy told DW. "Based on the result from the last chief executive election, it's clear that popularity is not an important factor for Beijing to choose its preferred candidate for the position. If Lee becomes the next chief executive, it means the most important criterion that a candidate has to meet is their loyalty to Beijing and the ability to fulfill Beijing's political ambitions."

Other observers also express concerns about the state of civil liberties in Hong Kong if John Lee becomes Hong Kong's next chief executive. "He would be willing to crack down on Hong Kong's civil society much heavier than Carrie Lam had done," said Glacier Kwong, Hong Kong campaign coordinator for the Inter-Parliamentary Alliance on China.

"He is from the security bureau and he will win a lot of support from the hawkish side of Hong Kong's pro-Beijing camp. If he was named the chief executive, it would mean a lot of authority would be given to the police and national security agencies," she added.

Steve Tsang from SOAS says Carrie Lam's successor will likely face many of the same constraints that she had to navigate. "Her successor may not be as politically tone-deaf as she has been, but it will take a seriously able and politically astute individual to restore a modicum of credibility to the SAR government and regain public respect and support," he told DW.

"But the direction of travel in Xi's China is almost certainly going to make this an impossible dream."