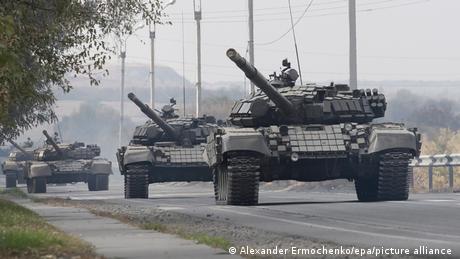 This article was last updated at 07:22 UTC/GMT

A team from the International Committee of the Red Cross (ICRC) has been released after being held in Manhush, a town in the eastern Donetsk province, Ukrainian deputy prime minister Iryna Vereshchuk has said.

"After negotiations, they were released during the night and sent to Zaporizhzhia," she said.

It is still not clear who detained ICRC team. Vereshchuk blamed "occupation authorities," while ICRC spokesperson Jason Straziuso was only willing to say it was not "a hostage situation."

The team had been trying to reach the besieged city of Mariupol on Monday and evacuate some of the remaining residents. It was their fourth such attempt since Friday.

Zaporizhzhia is about 200 kilometers (120 miles) away from Mariupol.

Russia's parliamentary speaker has said the West staged the civilian killings in Bucha to "discredit" Russia, despite having no evidence to back up his claims.

"The situation in Bucha is a provocation ... Washington and Brussels are the screenwriters and directors and Kyiv are the actors," said Vyacheslav Volodin," speaker of Russia's lower house of parliament, the Duma.

"There are no facts, just lies," he added.

Over the weekend, Ukrainian troops, satellite imagery, journalists and civilians revealed evidence of the slaughter of innocent civilians after Russian troops withdrew from Bucha, a suburb of Kyiv.

Images showed streets littered with the bodies of people. Other images showed victims who had been shot in the head with their hands bound. A mass grave was also discovered.

International condemnation followed the discovery of the bodies, with Western leaders calling for tougher action against Russia.

"Wars end eventually. The key is how to reflect on the pain, to maintain lasting security in Europe and establish a balanced, effective, and sustainable European security mechanism," Wang said, according to the ministry.

"China stands ready to play a constructive role in this regard in an objective position," he added.

It is the first reported high-level conversation between the countries since the beginning of March when Kuleba asked Beijing to use its ties with Moscow to stop Russia's invasion.

"We both share the conviction that ending the war against Ukraine serves common interests of peace, global food security, and international trade," Kuleba wrote on Twitter.

British military intelligence said Russian forces would need "significant re-equipping and refurbishment" before they could be redeployed in Ukraine.

In its latest intelligence update, the British Ministry of Defense said Ukrainian forces were retaking key terrain in the north after forcing Russia to retreat.

Moscow's troops were pulling out of areas north of Kyiv and Chernihiv in the north of Ukraine.

It said low-level fighting might continue while forces are withdrawing.

Japan brings in 20 Ukrainian refugees on special flight from Poland

The Japanese government flew 20 Ukrainian refugees into Tokyo on Tuesday in a high-profile show of support for Ukraine. Japan has long been reluctant to take in foreigners and has a stringent refugee policy.

The 20 are not the first Ukrainian refugees to arrive in Japan since the Russian invasion, but they are the first to be flown in on a special government plane.

"The government of Japan is committed to provide the maximum support to these 20 Ukrainians to help them live with a sense of peace in Japan," Foreign Minister Yoshimasa Hayashi told reporters.

Hayashi was on a three-day trip to Poland, visiting refugees centers in Warsaw, and held talks with Polish officials, international humanitarian organizations, and civil groups to assess how Japan could provide support.

Tokyo expects the 20 evacuees to stay in Japan for at least six months and would provide further support if needed.

Newly released satellite photographs by Maxar Technologies appeared to show that bodies have been on the streets of the Ukrainian town of Bucha since mid-March, when Russian forces controlled the town.

Ukraine has accused Russian forces of committing atrocities in Bucha, which lies on the outskirts of the capital Kyiv. Russia has denied these allegations and claims that the images of bodies on the streets of the town were faked by Ukrainian forces.

"High-resolution Maxar satellite imagery collected over Bucha, Ukraine (northwest of Kyiv) verifies and corroborates recent social media videos and photos that reveal bodies lying in the streets and left out in the open for weeks," a spokesman for Maxar Technologies said.

The United States stopped the Russian government from paying holders of Russian bonds more than $600 million (€547 million) from its reserves held in US banks.

Previously, the US had allowed Russia to access its frozen foreign reserves on a case-by-case basis to make coupon payments.

The US government decided to cut off Moscow's access to frozen funds on Monday, as payments including a $552.4 million (€503.6 million) principal payment on a maturing bond came due.

"Russia must choose between draining remaining valuable dollar reserves or new revenue coming in, or default," a US Treasury spokesperson said.

US approves sale of F-16 jets to Bulgaria

The US Defense Department has approved the sale of eight F-16 combat aircraft to Bulgaria for $1.67 billion (€1.52 billion).

Meta spokesman Andy Stone said the company uses automated systems that scan for violent imagery on Facebook and Instagram. Stone said that these systems blocked hashtags including #bucha and #buchamassacre.

"This happened automatically because of the graphic content people posted using these hashtags. When we were made aware of the issue yesterday, we acted quickly to unblock the hashtags," Stone tweeted.

UK Foreign Secretary Liz Truss said it was "very clear" that war crimes had been committed in Ukraine.

Speaking at a press conference in Poland, she said, "We are all appalled by the scenes in Bucha, the butchery, the clear evidence of sexual crime, of the targeting of innocent civilians and it is very clear that war crimes have taken place."

"The horrors that we've seen in Bucha are just the tip of the iceberg of all the crimes (that) have been committed by the Russian Army," Kuleba said.

"Half measures are not enough any more. I demand most severe sanctions this week, this is the plea of the victims of the rapes and killings. If you have doubts about sanctions go to Bucha first," he added.

Ukrainian authorities found the bodies of the mayor and four others in the village of Motyzhyn, west of Kyiv. The dead included mayor Olga Sukhenko, her husband, son, and two others who were not part of her family.

Police said the dead had their hands tied behind their back.

Four bodies, including that of the mayor, were found half buried in a grave in a pine forest near her house, reported French news agency AFP. A fifth body was discovered in a little well in the home's garden.

Police said 50-year-old Sukhenko, her husband, and son were abducted on March 24 when they refused to collaborate with invading Russian forces.

Australia's Foreign Ministry announced that it would ban the export of luxury goods to Russia.

Australian Foreign Minister Marise Payne said in a statement that the sanctions target "Putin and his wealthy enablers" rather than Russian consumers.

Payne said that the sanctions were being undertaken in coordination with the European Union, United Kingdom, United States and Japan, who have enacted or will enact similar bans.

Ukrainian President Volodymyr Zelenskyy said that he would address the UN Security Council on Tuesday.

The security council session is to consider Ukrainian allegations of a massacre committed in the town of Bucha by Russian forces.

Moscow has denied the accusations, calling them "criminal provocations." It said it would present evidence that Russian forces were not involved in the killings.

Zelenskyy said in a Monday address to Romania's parliament that the number of civilian casualties in towns such as Borodyanka may be even higher than in Bucha, adding that it is in Ukraine's interest to have an "open" investigation into atrocities occurring in the country.

Zelenskyy alleged that Russian forces will try to destroy traces of the atrocities, and that is important that international journalists go to Bucha and other towns to document the killings.

Ukraine's Defense Ministry said that Russia is preparing to launch new attacks in eastern Ukraine and take the northeastern city of Kharkiv.

Russia was attacking the towns of Rubizhne and Popasna in the Luhansk region, Defense Ministry spokesman Oleksandr Motuzyanyk said, adding that they were aiming to push through to Severodonetsk.

Severodonetsk has served as the Luhansk region's administrative center since the city of Luhansk was taken over by pro-Russian separatists in 2014.

Meanwhile, Luhansk governor Sergiy Gaiday said that Russia was preparing to attack the region and urged a mass evacuation.

"We understand that they are preparing for a full-scale big breakthrough," Gaiday said.

"Please don't wait for your homes to be bombed," he said, urging residents to evacuate.

A senior US official said that Russian forces were "repositioning" in a bid to conquer parts of eastern and southern Ukraine.

"Russia is repositioning its forces to concentrate its offensive operations in eastern and parts of southern Ukraine," US national security advisor Jake Sullivan said.

"Russia has tried to subjugate the whole of Ukraine and it has failed. Now it will attempt to bring parts of the country under its rule," the US official added.

Sullivan said that this repositioning may mark a new phase in the war in Ukraine that could "be measured in months or longer."

Summary of events in Ukraine-Russia crisis on Monday

Former German Chancellor Angela Merkel defended the decision not to admit Ukraine into NATO in 2008.

Germany's federal government warned Russian speakers in the country not to fall for "disinformation" from Russian state media.

Kyiv mayor Vitali Klitscho urged residents who fled the city not to return for "at least another week."

The US Department of Defense said that Russian forces are responsible for atrocities committed in the Ukrainian town of Bucha.

Germany said it would expel 40 Russian diplomats, with France also announcing a similar move, as outrage over the Bucha massacre grows.

Deputy chairman of Russia's security council and former President Dmitry Medvedev said that Moscow would respond harshly to the expulsion of diplomats from Western countries.

The governor of the northern Ukrainian region of Sumy said that there were no longer any Russian troops in towns or villages in the region.

An intelligence update from the UK's Ministry of Defence stated that Russia was consolidating its position in the eastern Donbas region of Ukraine.