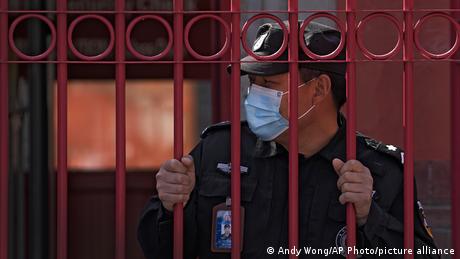 Around 25 million people in Shanghai remain locked down as Chinese authorities try to control the most severe coronavirus outbreak in the Asian nation since the initial lockdown in Wuhan at the start of 2020.

The latest outbreak has put pressure on public health facilities and health care workers in the country's largest city and financial center. It has also led to tens of thousands of people being quarantined at designated isolation facilities.

To control infections, Shanghai began a two-stage lockdown on March 28, which has been expanded to confine practically all of the city's residents to their homes.

They have also begun a city-wide campaign to conduct RT-PCR tests on all the residents. It follows a self-testing campaign on Sunday using rapid antigen tests.

Furthermore, the government has deployed the military and thousands of health care workers to Shanghai to help carry out the tests.

The People's Liberation Army (PLA) on Sunday dispatched more than 2,000 medical personnel from across the army, navy and joint logistics support forces to Shanghai, an armed forces newspaper reported.

And state media reported that about 38,000 health care workers from provinces such as Jiangsu, Zhejiang and the capital Beijing have been dispatched to Shanghai.

It is China's largest public health response since it tackled the initial COVID outbreak in Wuhan, where the novel coronavirus was first discovered in late 2019.

With the latest outbreak, Shanghai has emerged as a test of China's "zero-COVID" strategy, which emphasizes virus elimination based on testing, tracing and quarantining all positive cases and their close contacts.

Despite growing difficulties in enforcing the rigid policy, some experts say China will likely stick to it for the foreseeable future.

"Chinese health authorities realize that they are not prepared to change the strategy in the near term, due to an under-vaccinated older population, strained health infrastructure and lack of communication and psychological preparations," said Xi Chen, an associate professor of health policy and economics at the Yale School of Public Health.

As the city's medical facilities remain overstretched, some residents told DW that patients with other urgent non-COVID illnesses are being turned away.

"All medical staff at hospitals in Shanghai are overloaded," said a woman surnamed Zhang, who asked not to reveal her full name for fear of reprisals.

"My friend's father recently had a surgery for a blood clot, but his recovery didn't go that well," she told DW. "When he returned to the same hospital seeking treatment, the vascular surgeon was called away to support the fight against the COVID outbreak. A few days after he returned home, his condition worsened, and he had to have an amputation."

The government's sudden decision to impose a full lockdown has also posed severe problems for some older people who have no access to mobile devices or lack the digital literacy to purchase food or groceries online.

"While most people in Shanghai are unlikely to starve to death, some old people who live alone or other marginalized groups could face the situation of lacking access to basic supplies," said Zhang.

Even domestic media outlets in China have highlighted issues of unreported deaths or lack of treatment for infected old people at nursing homes. But those articles were soon removed from the internet.

Chinese media outlet Caixin reported on April 2 that there had been at least more than a dozen deaths at a nursing home in Shanghai, but it wasn't clear if the deaths were caused by coronavirus. Within hours, the article was removed from Caixin's website.

"Many people in Shanghai are no longer afraid of being infected by coronavirus, but they are more concerned about experiencing other urgent health issues and being denied access to necessary medical care," said Zhang.

Public outrage over separation of parents and children

Unverified videos of babies and young children in state-run wards have been widely shared on social media, with some of them showing children in crowded and unsanitary conditions.

Many parents and guardians have taken to social media to voice their anger at the policy.

On Weibo, a Chinese woman surnamed Zhu shared the news of her 2-year-old daughter being taken away by authorities to a quarantine site in Jinshan District. "Three days after she was taken away, we only received messages saying she was fine, but there were no photos of her," she wrote.

"After seeing the images online, I was shocked. My daughter was asymptomatic when she was taken to the site, and it's too easy for her to be cross-infected in that kind of environment. Please send her back to me. She doesn't need any critical treatment for this illness. What she needs is company and being taken care of," the woman added.

Her post attracted thousands of shares and comments on Weibo, and relevant keywords also went viral online. "What's wrong with Shanghai? What's wrong with the leaders in Shanghai? I'm not sure if the person who made the decision has kids or not, but I'm sure he doesn't have a mother. This is outrageous," wrote one person on Weibo.

A day after her posts pleading to be reunited with her daughter went viral, Zhu wrote on April 3 that authorities agreed to let her be with her daughter at the quarantine site. "The environment is the same as the images shared online," she wrote. "My daughter was apparently very nervous in the environment and she finally fell asleep at 4 a.m. There are many mothers here with their kids now, but why didn't they let us come and keep our children company earlier? I still don't understand."

Other Shanghai residents told DW that hospitals only agreed to let parents accompany their children at the quarantine site after too many kids were admitted and there weren't enough nurses to take care of them. "It was true that they didn't allow parents to keep their children company before the public outrage," said a woman surnamed Sun, who declined to reveal her her full name due to security concerns.

"I think since no one in Shanghai expected the outbreak to be so serious, they were slow to adjust the policies for quarantining children in the beginning," Sun told DW. "Instead of trying to find someone to blame, the public was simply trying to improve the situation. We are all from Shanghai and we still love this city."

"If the child is younger than seven years old, those children will receive treatment in a public health center," said Wu Qianyu, an official from the Shanghai Municipal Health Commission, AFP news agency reported. "For older children or teenagers... we are mainly isolating them in centralized (quarantine) places."

How much longer can China hold on to zero-COVID?

Despite the challenges, China remains committed to its zero-COVID policy, for now.

Chinese President Xi Jinping has urged the country to curb the momentum of the outbreak as soon as possible while sticking to the "dynamic-clearance" policy.

On Saturday, Vice-Premier Sun Chunlan, who was sent to Shanghai by the central government, urged the city to "make resolute and swift moves" to curb the pandemic.

But Mei-Shang Ho, a research fellow at the Institute of biomedical sciences at Academia Sinica in Taiwan, believes the chances of China eradicating the virus domestically is close to zero. "From a scientific perspective, it's impossible to support the Chinese government's approach with rational analysis," she told DW.

Xi Chen from the Yale School of Public Health said that Chinese policymakers don't seem willing to bear the huge price of reopening. "It will be very problematic to blindly stick to zero-Covid without thinking about a more sustainable strategy. But it will be equally problematic to discuss 'live with the virus' without better preparing for it."