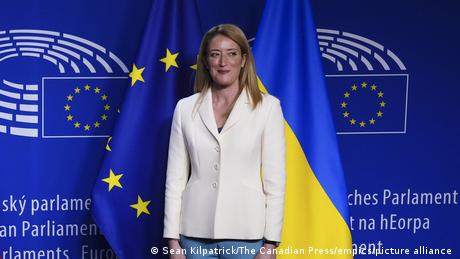 The first European Union top official to visit warn-torn Ukraine is set to arrive on Friday.

Ahead of her departure, European Parliament President Roberta Metsola tweeted: "On my way to Kyiv."

Metsola, who was elected in January, will be in Kyiv to show a message of support and hope, though further details on the Maltese MEP's trip have been withheld due to security reasons, her spokesperson said.

Meanwhile, Russia has announced plans to expand the list of EU officials banned from entering the country following Western sanctions over the Kremlin's military actions in Ukraine.

Russia has been hit with a barrage of sanctions since it invaded its neighbor on February 24.