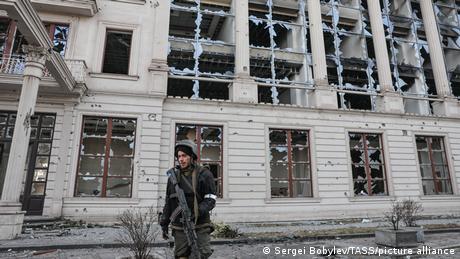 This article was last updated at 03:17 GMT/UTC.

Ukraine's ambassador to Japan, Sergiy Korsunsky, said that Ukraine expects to receive enhanced military equipment from the United States and Britain that will give the country the ability to better protect its skies.

"They still have superiority in air force, in airplanes and missiles, and we expect to begin to receive super-modern equipment from the United States and Britain to protect our skies and our cities," Korsunsky said.

"When they fire cruise missiles from long distance, we cannot get to the launch place. We have to intercept them. That's why we need this modern equipment."

Countries could have their gas supply turned off after Moscow set a deadline for payments to be made in Russian currency.

"If such payments are not made, we will consider this a breach of obligations on the part of our buyers," Putin said. Russia would then halt existing contracts.

Germany has insisted that it will pay in euros or dollars as stipulated in the contracts, and called Moscow's demand to pay in rubles "blackmail." Before the Russian invasion of Ukraine, Germany imported 55% of its gas supplies from Russia.

France's economy minister said that Berlin and Paris were preparing for a scenario where Russia turns off gas taps.

The G20 is an international forum that consists of most of the world's largest economies.

Trudeau said he shared his view with Indonesian President Joko Widodo. The G20 summit is scheduled be held in November on the Indonesian island of Bali.

The US and Australia have also voiced support for kicking Russia out of the summit, whereas Brazil and China have said they oppose barring Putin from attending.

US official: Russian refocusing on Donbas could prolong war

Russia's refocusing of its efforts on Ukraine's eastern Donbas region could lead to a "longer, more prolonged conflict" in the country, a senior US defense official was quoted as saying by the AFP news agency.

"Just because [the Russians] are going to prioritize it and put more forces there or more energy there doesn't mean it's going to be easy for them," the official said. "It could be a harbinger of a longer, more prolonged conflict here as the Russians try to gain some leverage, gain some progress, and perhaps gain some chips at the bargaining table."

Fighting in the Donbas region started in 2014 as pro-Russian protests morphed into a separatist insurgency that established breakaway "people's republics" in Donetsk and Luhansk.

Russia had previously denied public support for the insurgency for years, but it recognized the two self-proclaimed "people's republics" shortly before launching its full-scale invasion of the country a little over a month ago.

Ukrainian negotiators have said that they are willing to discuss the country's "neutrality" as part of a future peace deal with Moscow but that there would be no compromise on the country's "territorial integrity."

Last week, senior Russian military leader Sergey Rudskoy announced that the war was entering a new phase and that Russian troops would concentrate on taking Donbas. US intelligence said that some Russian troops were being repositioned away from Kyiv, although shelling of the area continued.

Ukrainian President Volodymyr Zelenskyy said in a video address that the situation in the south of the country and the Donbas region in the east remained extremely difficult.

Zelenskyy said that Russia was building up forces around the besieged city of Mariupol. Mariupol has been a major focus of fighting for weeks as Russian forces attempt to take the Azov coast.

"There will be battles ahead. We still need to go down a very difficult path to get everything we want," Zelenskyy said.

Zelenskyy also said that he had fired two top officials at the national security service and accused them of betraying their oath to defend Ukraine.

"I do not have time to deal with all the traitors, but they will gradually all be punished," Zelenskyy said.

Summary of events in Russia's war in Ukraine on Thursday

See all the developments from Thursday's live updates by clicking here.

Pentagon spokesman John Kirby said it was unclear if Russia's convoy of military vehicles to Kyiv "even exists" anymore after failing to accomplish its mission.

The International Atomic Energy Agency (IAEA) said it was informed by Ukraine that Russian forces have "in writing, transferred control" of the Chernobyl nuclear plant to Ukrainian authorities.

US President Joe Biden said Russian President Vladimir Putin seems to be self-isolating and may have sacked some of his advisers.

Biden also announced the largest-ever release of US emergency oil reserve in a bid to bring down gasoline prices.

The US Treasury Department announced sanctions against a series of Russian tech firms, including Russia's largest chip maker.

Moscow imposed entry bans on representatives of the European Union in response to Western sanctions.