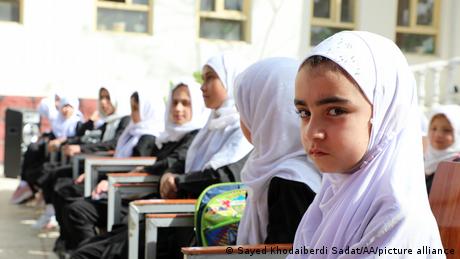 She made the announcement during a virtual UN donor conference aimed at raising $4.4 billion in aid for Afghanistan.

"The humanitarian crisis Afghans face is among the gravest in the world," Baerbock said.

Berlin's commitment beyond humanitarian aid continues to depend on the actions of the Taliban government, the German foreign minister warned.

The $4.4 billion the UN hopes to collect to help Afghanistan is the biggest sum ever for a single country at a pledging conference.

Funding for aid programs in Afghanistan has dried up since the Taliban takeover in August last year.

UN Secretary-General Antonio Guterres said the humanitarian situation in the country has "deteriorated alarmingly" and the economy has "all but collapsed."

"Some 95% of people do not have enough to eat. Nine million people are at risk of famine. UNICEF estimates that a million severely malnourished children are on the verge of death, without immediate action," he said in a video message.

"Ukraine is of vital importance, but Afghanistan, you know, calls to our soul for commitment and loyalty," said Martin Griffiths, who heads the UN Office for the Coordination of Humanitarian Affairs, ahead of Thursday's pledge drive.

"In simple terms, the humanitarian program that we are appealing for is to save lives," he said.

A decision by the Taliban last week to go back on a pledge to let girls above grade sixreturn to school was criticized by many of the donors.

"No country will develop and thrive if women and girls are excluded from economic and social life," Baerbock said.

Britain pledged $374 million, but UK Foreign Secretary Liz Truss said, "We need to work through the UN to deliver real change for the Afghan people, upholding their rights and holding the Taliban to account,"

"The Taliban will not control our humanitarian funding," the United States ambassador to the UN, Linda Thomas-Greenfield, said bluntly when announcing her country's pledge of $204 million.

Guterres clearly took note of the concerns and called for the reopening of schools for all students in Afghanistan "without discrimination."