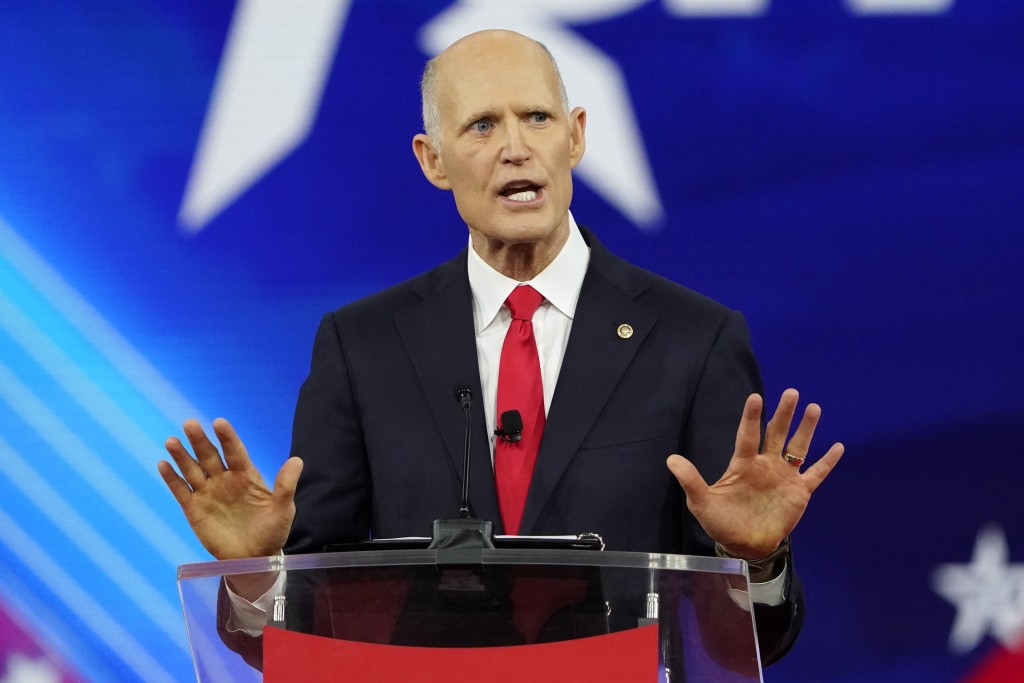 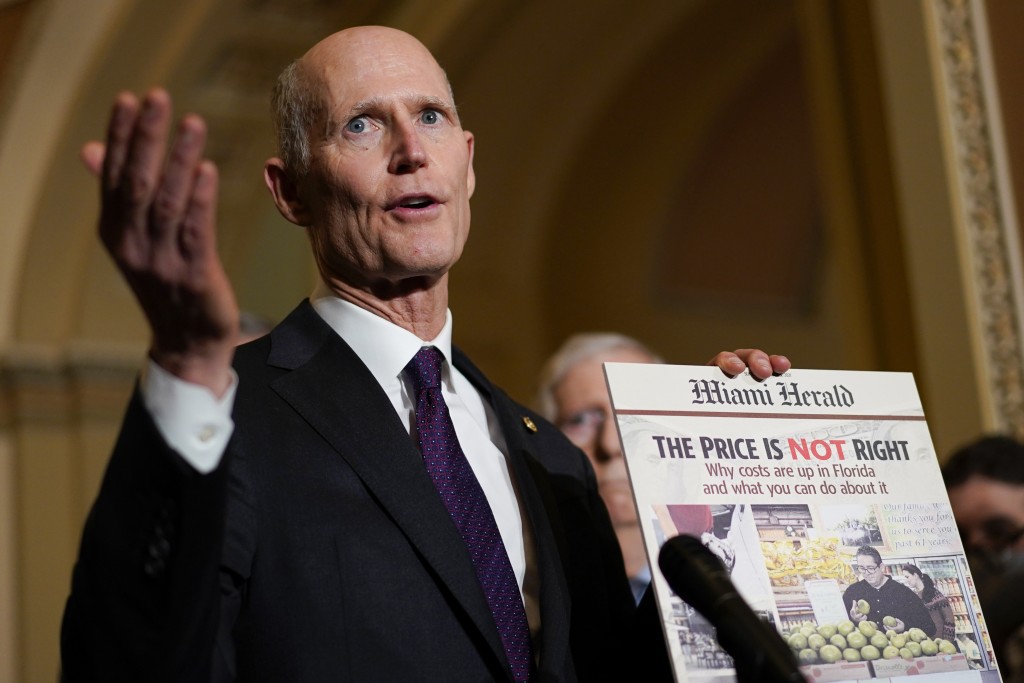 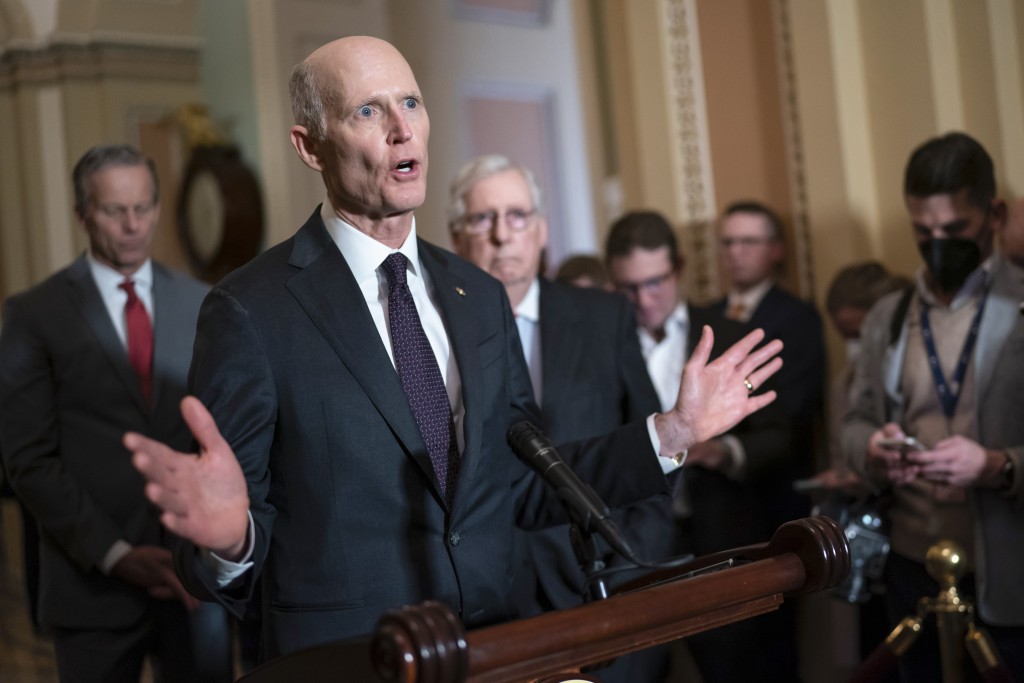 TALLAHASSEE, Fla. (AP) — Rick Scott likes to think of himself as Gen. Ulysses S. Grant during the Civil War.

Barely halfway through his first Senate term, the Florida Republican is already leaning into a fight against his own party’s leadership as he navigates a delicate alliance with former President Donald Trump and pushes a handcrafted policy agenda that many Republicans reject.

But Scott, who is also the Senate GOP’s midterm chief, insists he has only begun to fight.

The 69-year-old former businessman likens his situation to that of Grant during the battle of Vicksburg, when the general ordered multiple bloody assaults on the Southern stronghold before delivering a victory that helped turn the war in the Union’s favor.

“I think of myself more like Grant taking Vicksburg, and I think as a result of that, I’m always going to be perceived as an outsider,” Scott said in an interview. “I’m going to keep doing what I believe in whether everybody agrees with me or not.”

For now, what Scott believes is directly at odds with the wishes of Senate Republican leader Mitch McConnell.

Scott is refusing to abandon an 11-point governing plan he released with little input from party leadership, even after McConnell’s public rebuke one month ago. In the weeks since, Scott has continued to promote his plan, which would raise taxes on millions of Americans who don’t earn enough to pay federal income taxes, in dozens of speeches and media appearances.

Those close to Scott suggest he understands the modern Republican Party better than McConnell and his establishment allies. And as tension lingers, Scott is leaving open the possibility of challenging McConnell for Senate majority leader should Republicans retake the majority this fall, although the prospect of him waging a successful effort are slim. Most who know Scott well believe he’s more likely to seek the presidency in 2024.

The story of Scott’s unlikely rise from a little-known Florida businessman with a stiff demeanor to a two-term governor of the nation’s premier swing state to a rising first-term senator willing to buck his own party’s leadership offers a fresh reminder that the conventional rules long governing national politics no longer exist. Few believe Scott could knock McConnell from his leadership post and Scott is an afterthought in early 2024 presidential chatter, which is dominated by his Florida successor, Gov. Ron DeSantis.

Scott may not be as well-known or charismatic as other Republican presidential prospects, but allies suggest it would be a mistake to dismiss him as a serious player in the modern day Republican Party.

Political consultant Curt Anderson, who has advised Scott for more than a decade, described the senator’s interest in McConnell’s job as “pretty low,” although Trump has privately encouraged Scott to challenge the Senate Republican leader. When asked about a potential presidential run, however, Anderson said only, “We’ll see what opportunities lay ahead.”

Not only has Scott won every race he’s run, often as the underdog, he is the richest member of Congress with a net worth that exceeded $232 million before his last election. He has also expanded his donor network considerably over the last year in his role as chairman of the National Republican Senatorial Committee.

Lest anyone question Scott’s willingness to dip into his personal fortune to further his political ambitions, he spent more than $63 million of his own money to win Florida’s 2018 Senate election.

And his political footprint is growing.

As chairman of the Senate GOP’s campaign arm, Scott is responsible for his party’s quest to retake the Senate majority. He is tasked with leading the Republican Senate strategy, including how best to dispatch tens of millions of dollars to key races across the country.

But McDaniel’s praise ended when the conversation turned to his governing agenda and the provision that would raise taxes.

“I’m not a policymaker,” McDaniel said when asked directly whether she supports Scott’s plan.

Republicans in Washington are divided over whether they even need a governing agenda.

The Republican Party declined to adopt a platform at Trump’s 2020 presidential nominating convention. And many Republican strategists believe the GOP can win the House and Senate majority this fall without providing specific policy goals given Democratic President Joe Biden’s weak political standing and traditional political headwinds against the party in power.

When asked earlier in the year what the GOP’s agenda would be if it took control of Congress, McConnell told reporters, “That is a very good question and I’ll let you know when we take it back.”

House Republicans worked on their own “Commitment to America” agenda last week at their annual retreat in Jacksonville, Florida.

Banks described Scott’s agenda as “a courageous plan” that gives the party “a good framework to follow.” Like other leading Republicans, however, he stopped short of endorsing Scott’s tax provision.

Scott’s plan to “Rescue America” features 11 broad policy goals, most of which are focused on the conservative movement’s cultural priorities. Critics have latched onto more specific provisions regarding taxes and federal legislation.

Scott calls for a minimum federal tax on tens of millions of Americans who don’t make enough money to pay federal income taxes. Another provision would sunset all federal legislation five years after passage, which critics contend would jeopardize Social Security and Medicare, although Scott has said that is not his intention.

Indiana Sen. Mike Braun acknowledged that some in the Senate GOP caucus grumbled about the plan, but he said he remains confident in Scott’s political leadership.

In a brief interview, Braun insisted Republicans were still in a strong political position heading into the November midterms because Democrats’ mistakes have “served up a platter of opportunity.”

“I say take advantage of that, but also stake a little ground out that gives independents who elect swing state senators and the president something other than the party of ‘No,’” Braun said.