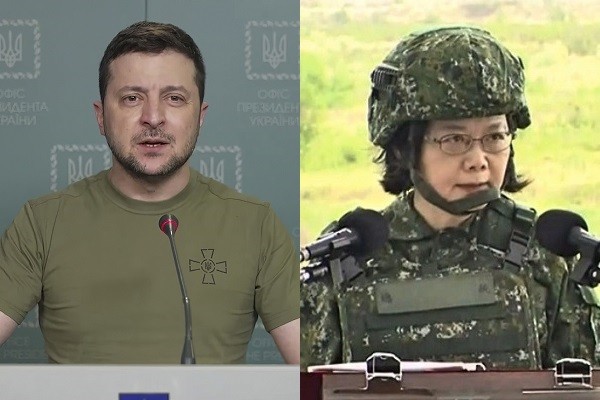 The Financial Times on Tuesday (March 29) cited Taiwanese government officials as stating that Volodymyr Zelensky’s defiant daily broadcasts in Kyiv have inspired Taiwan to develop a similar strategy of having Tsai regularly rally the country's forces and citizenry. One official stated that “Propaganda and political warfare are crucially important in today’s war. Zelensky is showing his people that he is not running and not hiding."

The official said that Tsai should adopt a similar approach of maintaining a steady presence on the airwaves rather than taking a backseat to the generals. “That means it is necessary to have our president do the same, showing herself out there instead of being hidden away," said the source.

Based on papers authored by Chinese military scholars, the People's Liberation Army (PLA) has plans to try to seize and potentially kill Taiwan's top political and military leaders, including the president, in the first phase of an invasion. Taiwan's military reportedly plans to place these key leaders in underground command and control centers if there are signs of an impending assault.

However, the official asserted that sequestering the president may not be the most effective strategy. "You can see from Ukraine that the leader needs to be out there to boost morale and rally support from abroad," according to the source.

The official pointed out that in order to be able to put Tsai's messages out while still protecting her, a great deal of preparation would be needed, such as pre-recording speeches to prevent the PLA from tracking her movements. A second official stated that the Tsai administration and the armed forces are reevaluating the country's defense preparations to incorporate elements of Ukraine's propaganda and political warfare strategy.

Since the Russian invasion of Ukraine began on Feb. 24, the percentage of Taiwanese expressing a willingness to fight to defend their country has risen dramatically. A survey released on March 15 by Taipei-based think tank Taiwan International Strategic Study Society (台灣國際戰略學會) showed that 70.2% of respondents are willing to defend Taiwan if China takes military action against it, a substantial increase from the 40.3% who said they were willing to fight in a poll published Dec. 28, 2021.