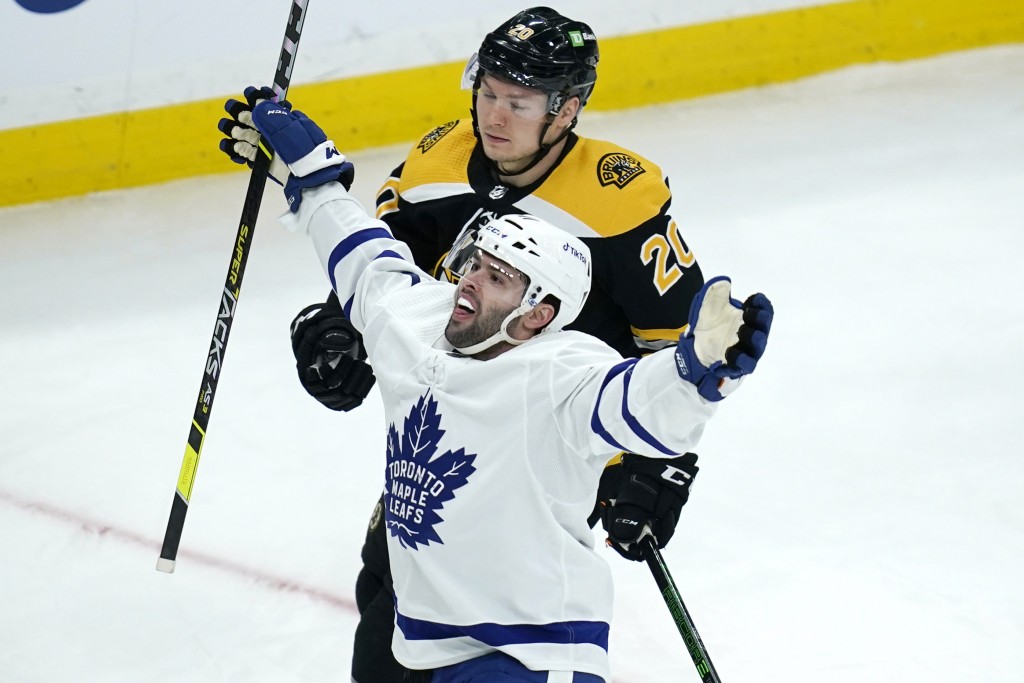 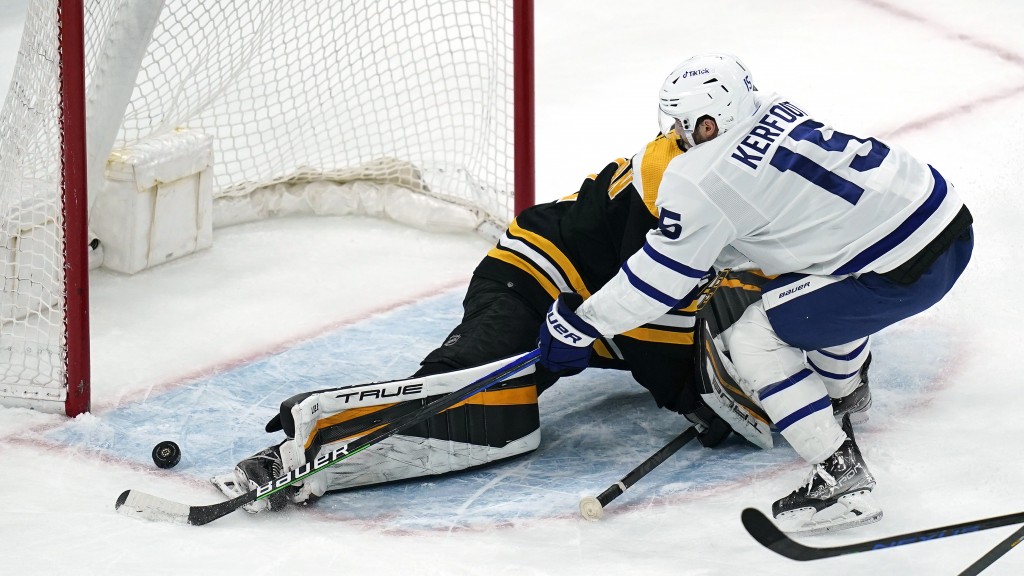 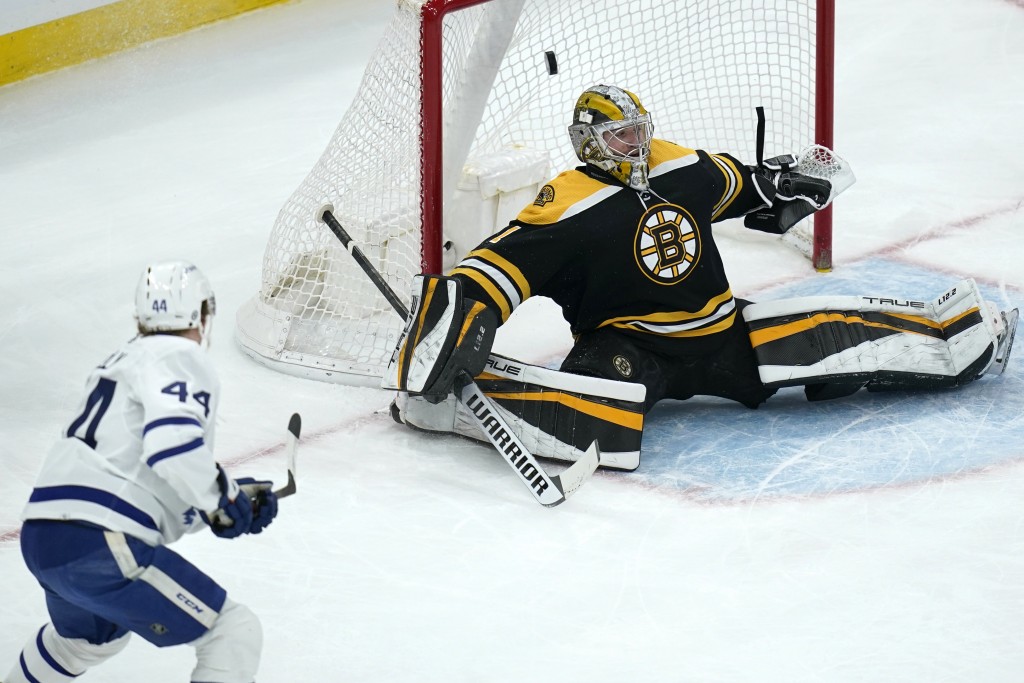 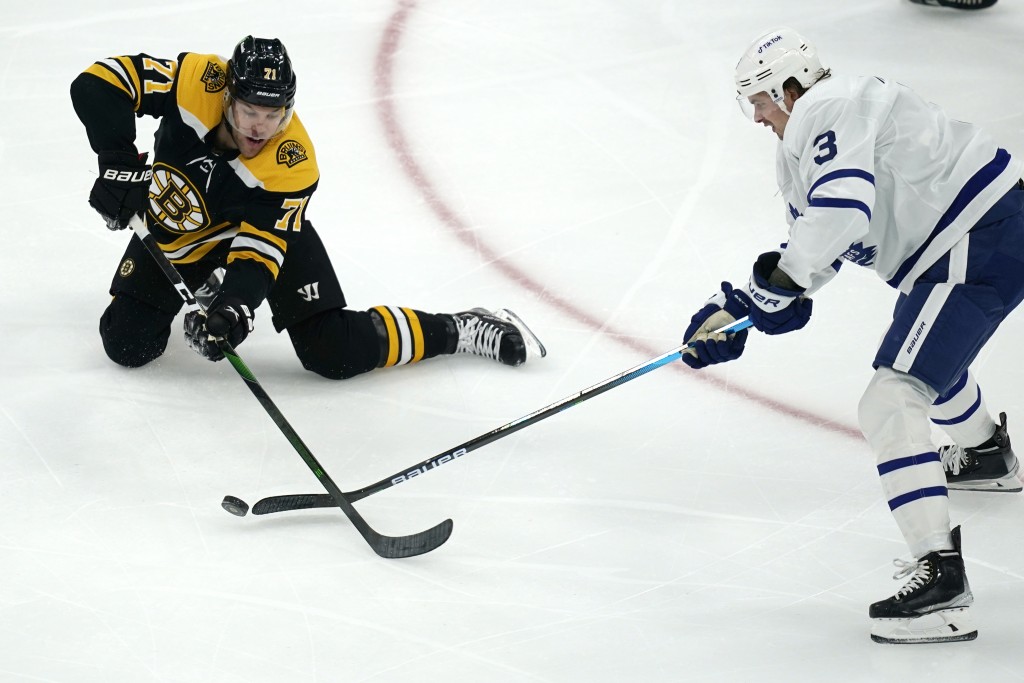 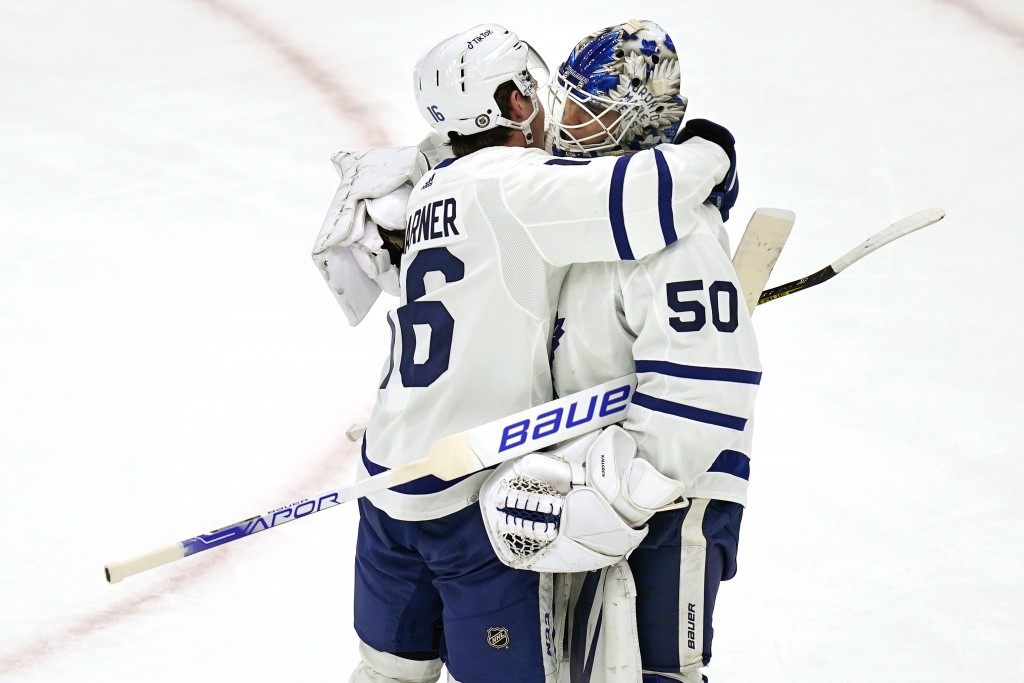 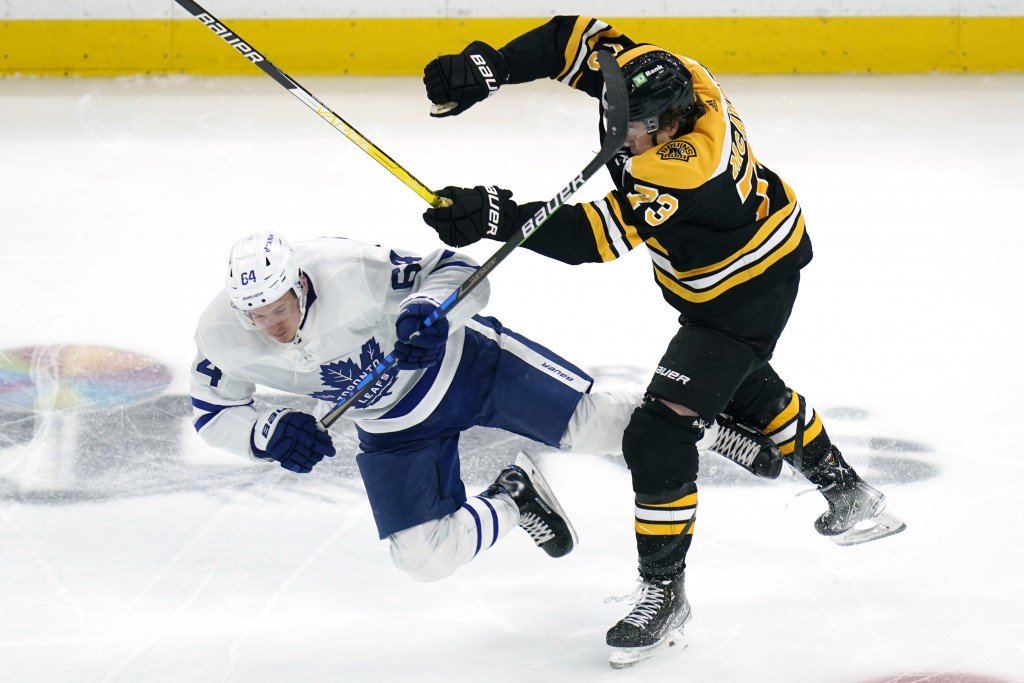 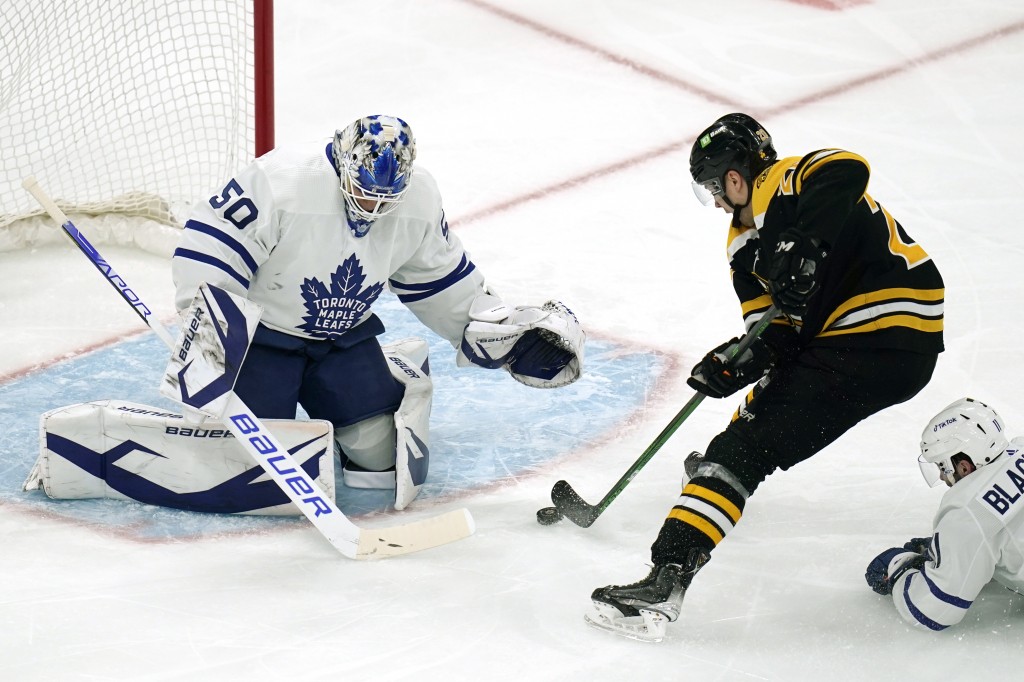 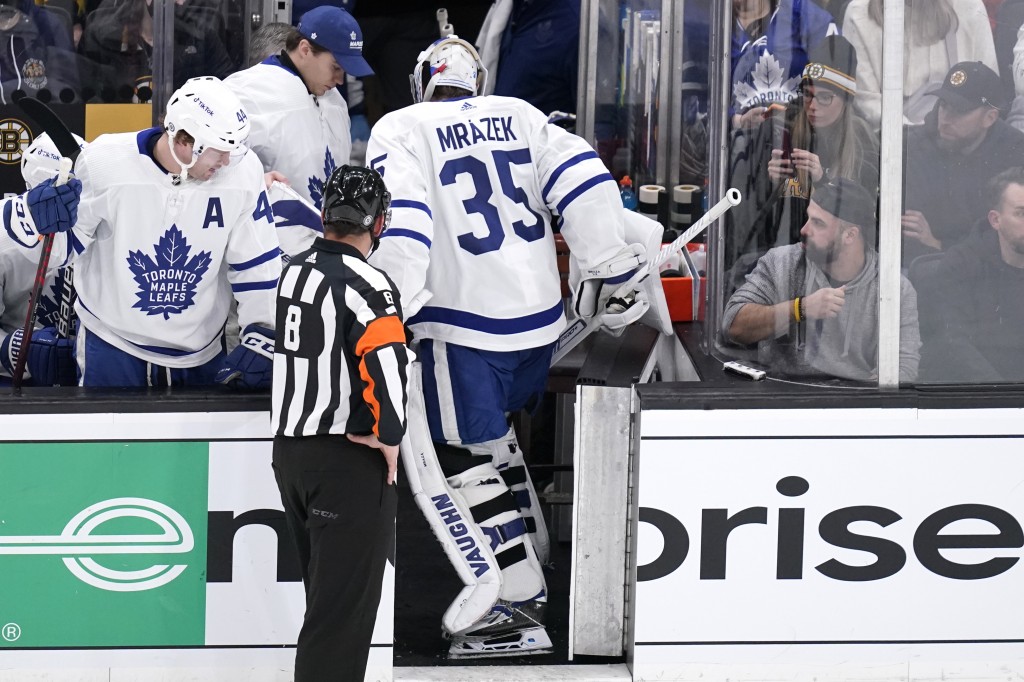 BOSTON (AP) — Auston Matthews scored his league-leading 49th goal and had an assist as the Toronto Maple Leafs ended Boston’s four-game winning streak with a 6-4 victory on Tuesday night.

Matthews’ goal late in the second period was the fourth of five straight scored by the Maple Leafs, who held a 6-1 lead and flustered the Bruins into a string of retaliatory hits and penalties.

“I just thought we didn’t give them a lot,” Toronto coach Sheldon Keefe said. “We managed a couple of the strong pushes that they had, but otherwise a real patient game and we took advantage of the opportunities that we had.”

Colin Blackwell scored his first goal since joining Toronto in a trade at the deadline. Morgan Rielly, Alexander Kerfoot and Mitchell Marner each had a goal and an assist.

John Tavares added two assists and Erik Kallgren had 23 saves after entering in the first period, replacing Petr Mrazek, who left with a groin injury. The Leafs also lost a pair of defensemen to injuries, but had more than enough offense before the Bruins cut the margin.

“I didn’t think it was overly chippy, to be honest with you. There was no fights or anything like that,” Rielly said. “Overall, the team did a good job of staying focused on the outcome of the game. We protected each other when we had to, but I don’t think it was out of control by any means.”

David Pastrnak scored his 38th goal for Boston. Jake DeBrusk, Curtis Lazar, Taylor Hall also scored for the Bruins, who could not keep up with the speedy Maple Leafs.

Jeremy Swayman allowed six goals on 25 shots before being replaced by Linus Ullmark at the start of the third period.

The game was close early as Blackwell and Pastrnak scored less than a minute apart. But the 1-1 tie lasted only a few minutes before Rielly scored and the Leafs broke open the game and won for the third time in four games since the trade deadline.

“If all those things don’t happen, you need your goaltender to bail you out then and that didn’t happen, either,” Cassidy said. “Give them credit for starting on time and that’s where the game got away from us and we chased it — tough team to chase the game against."

Kerfoot scored on a breakaway with 1:16 left in the first period, and the Leafs added three more goals in the second before DeBrusk’s goal cut the lead to 6-2 late in the frame.

The Bruins' frustrations had already boiled over, adding to the Leafs’ lead after Taylor Hall knocked Toronto defenseman Lya Lyubushkin out of the game with a punch, retaliating for what Hall felt was a hit from behind.

The roughing penalty led to Matthews’ goal with four minutes left in the second and David Kampf struck again for the Leafs just 47 seconds later. Kerfoot picked up an assist on the goal and was leveled by Connor Clifton well after the play as he skated to celebrate with his teammates.

The Bruins did make it interesting when Hall scored with 2:22 remaining on a goal that was initially disallowed until replays confirmed the puck got through Kallgren’s pads.

“It kind of feels like a little bit of a blur,” Boston defenseman Charlie McAvoy said. “We’ll go back and look at it, but you can’t give a team like that opportunities. They have a lot of skill and they can capitalize. The self-inflicted stuff is where you’ve got to limit it.”

Matthews entered the game tied with Edmonton’s Leon Draisaitl for the NHL lead with 48 goals. Now just one away from reaching the 50-goal milestone, Keefe said he expects Matthews to remain low key and not be distracted by the scoring race as the playoffs approach.

“He’s right there, obviously. If I know Auston, he’s just going to continue to play and not get too focused on anything else. He’s too good for the chances and the goals not to continue to come," Keefe said.

NOTES: The Leafs said Mrazek left the game with a groin injury, which could keep him out a while as their top goalie Jack Campbell continues to recover from a rib injury that’s kept him out for several weeks. ... Blackwell was playing in his fourth game since the Leafs acquired him and D Mark Giordano from the expansion Kraken in exchange for three draft picks. … Toronto D Justin Holl did not return after a shot by Derek Forbort hit him in the helmet in front of the Leafs’ net. … Boston’s Brad Marchand received a 10-minute misconduct penalty after the second period.