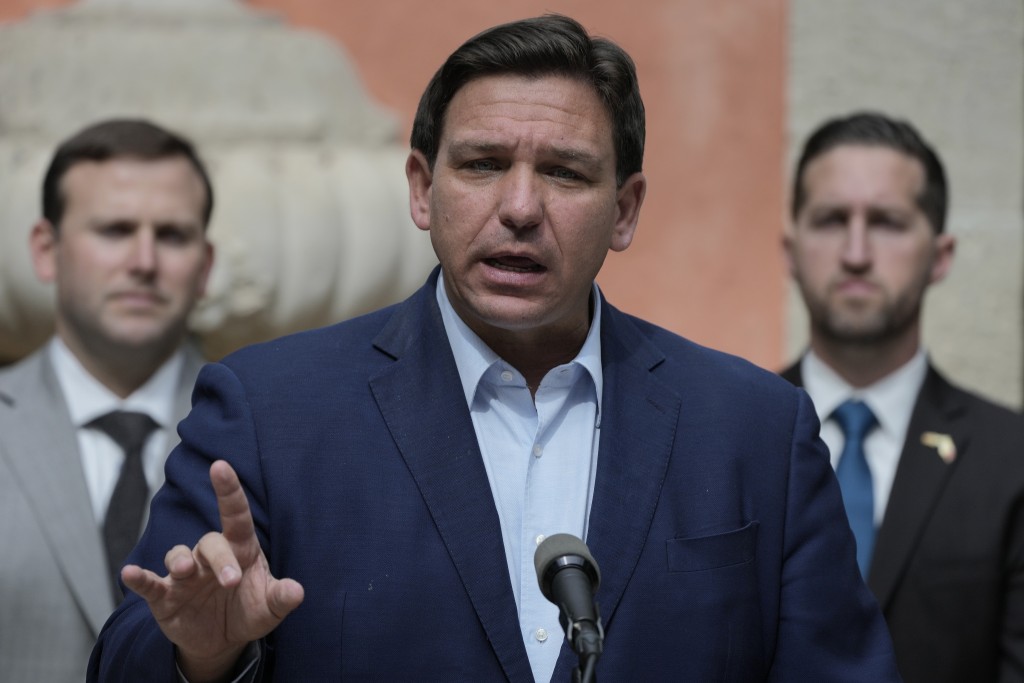 TALLAHASSEE, Fla. (AP) — In a rare disagreement with the Republican-dominated Legislature, Florida Gov. Ron DeSantis vetoed the state's newly drawn congressional maps Tuesday, and lawmakers will hold a special session in April to redraw them.

The veto puts more pressure on the Republican-dominated Legislature to approve a map and resolve any resulting lawsuits before the June 13 to 17 qualifying period for federal candidates. Florida is also creating a new 28th district because of population growth.

“In their, I guess, understandable zeal to try to comply with what they believe the Florida constitution required, they forgot to make sure what they were doing complied with the 14th amendment of the U.S. Constitution,” DeSantis said during a news conference.

The Senate map largely left those two districts intact. The House approved two maps, a primary map to appease the governor that dismantled Lawson's district, but would have created a Black plurality district in Jacksonville. The secondary map largely preserved both representatives' districts.

The Florida constitution states that political maps have to be drawn in a way that does not favor or hurt a candidate or party, that districts should be compact and that the ability of minorities to elect members to Congress should not be diminished.

DeSantis' proposal also would likely give Republicans more Florida seats than the maps approved by the House and Senate. That would benefit DeSantis, a potential 2024 presidential candidate, if he were to be elected to the White House.

Nationally, Democrats believe they have shifted the balance in their favor in the number of Congressional seats winnable for their party, partly through aggressive redistricting in states they control, while Republicans have focused more on shoring up incumbents than on making new seats winnable.

But congressional districting still must be finalized in Florida and five other states, including two others where the governor and Legislature are at odds over the maps and two where state courts have struck down initial drafts. Additionally, expected Supreme Court decisions could spur changes to the maps in the years ahead that would alter the balance.

In Florida, DeSantis interjected himself into the once-a-decade process of drawing new political lines following the federal census by submitting his own map. The Senate did not take the governor's map into consideration, and the House approved two maps, a primary map to try to appease DeSantis and a second in case the first map was found to be unconstitutional.

“From the beginning of the redistricting process, DeSantis has been force-feeding his desired map onto House and Senate leadership resulting in a ridiculous two-map legislative submission that cowardly attempted to appease his racist political agenda,” Democratic state Rep. Kelly Skidmore said in a news release.

While the House was debating the bill, DeSantis used Twitter to say the plan was “DOA."

Lawson predicted the DeSantis map won't hold up in court.

“DeSantis made it clear that his ultimate objective was to cut the number of African Americans and Hispanic Americans serving in Congress," Lawson said in a news release. “The fact that DeSantis justifies his goal to create racial disparities in congressional representation by citing the constitutional amendment created following the Civil War for the very purpose of remedying those same disparities is absurd.”

“Our goal is for Florida to have a new congressional map passed by the Legislature, signed by the Governor, and upheld by the court if challenged,” the leaders said in a joint statement.

At the news conference, DeSantis said, “We're not going to have it drawn by a court.”