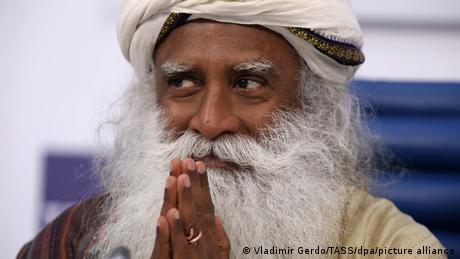 Riding 30,000 kilometers (18640 miles) on a Ducati Multistrada 1260 across 26 countries in Europe, Asia and the Middle East, Indian spiritual leader Jaggi Vasudev is on a mission.

Known as 'Sadhguru' to his followers, Vasudev's ride on this special edition bike is part of his Save Soil movement, spreading awareness about soil degradation.

In the past two decades, Vasudev's activities have received global attention and given him the status of a new age ecological influencer.

Vasudev's flagship platform Isha Foundation receives support from the Dalai Lama, Leonardo Di Caprio, Deepak Chopra, and Will Smith, all helping to spread the word about his campaigns.

According to Isha Foundation, Vasudev's awareness raising approach is "ecology married with economy." But how traveling across continents, as an approach, marries economy with ecology remains a mystery.

Vasudev's model of activism mainly focuses on spreading the word which, according to Isha, will "urge governments to set up policies."

Like previous campaigns, the Save Soil campaign also plans to do this, and aims to make "at least 3.5 billion people" or "60% of the global electorate" aware of the cause.This approach seems to shift the focus away from institutions like state and market. Instead, it puts the onus on the people to pressure governments into action.

'Campaigns only work if they hold institutions accountable'

Professor Prakash Kashwan is an expert on environmental governance. For him, "the campaigns that Sadhguru and celebrities run can contribute positively only if they are tied to institutional arrangements that hold public and private institutions accountable." Agreeing with Kashwan on this, environmentalist Leo Saldanha, says that "a review of the public records of the financials of Isha Outreach reveals that the foundation has spent nothing at all on planting trees from the millions they have raised abroad."

In India, there were at least two instances when the state acknowledged Vasudev's campaign and announced policy measures. However, these measures seldom get materialized and thus end up weakening India's environmental regulatory framework, says Kashwan.

What is the impact on the environment?

Isha Foundation's successes are adequately portrayed through statistics and numbers. While many may recognize Fridays for Future as the world's largest ecological movement today, it is Vasudev's Rally for Rivers campaign that lays claim to this title.

But the tangible impact of these awareness campaigns on the environment is challenged by some. According to Saldanha, "to build soil health we need to build biomass. Which can only happen if we were to return to agroecological practices suited to particular agroecological zones." This cannot happen as the Indian soil is "acutely carbon deficit," says Saldanha.

Doubts persist over whether motorbiking thousands of kilometers is the most climate-friendly way to raise awareness about soil degradation.

Neuroscientist Sumaiya Shaikh's interest in Vasudev was piqued when videos of him solidifying mercury went viral. She asked herself, "if he can do this with his hands and has that power, why use it for mercury? Use it for bigger things!"

Shaikh then fact-checked this claim and published an article on Alt News, an Indian non-profit fact-checking website. Her arguments on mercury poisoning, as opposed to Vasudev's claims on mercury's benefits, point to the debate between modern medicine and South Asian traditional medicinal practices such as Ayurveda and Siddha.

But criticism of Vasudev, no matter how densely packed with scientific explanation, doesn't seem to diminish the faith among his followers. According to Durba, a follower of Vasudev, "it really doesn't affect [me]. Absolutely nothing."

Isha Volunteer Kaninika is "overwhelmed and humbled to hear the success stories, achievements and fulfillment of the ecological projects undertaken by Isha Foundation" and doesn't have time for the critical stances of others.

For followers like Durba and Kaninika, it is the personal path that matters, not the layers of discourses that Vasudev's public image comes with.

This connection that Vasudev has managed to create with his ardent fans ensures that his followers also join the ecological activities he promotes, irrespective of the critique.

Sociologist Radhika Chopra studies South Asian masculinities and for her, Vasudev has "inherited a lineage of someone who can restore lost spirituality and connections with the spiritual, inner self. This lineage harks back to people like Mahesh Yogi and Osho. [But] he has also moved significantly away from this lineage and intertwined the discourse of recovered spiritual selves with the restoration of ecology."

According to Chopra, Vasudev's emphasis on soil could represent the anxieties of those who consider themselves the rightful tenders against those who simply suck the land of all its meaning.

This movement is a "dangerous distraction" away from the actual climate-saving work being done by grassroots activists, says Kashwan. But Isha Foundation remains steadfast, particularly as several Caribbean nations — Antigua and Barbuda, Dominica, St. Lucia, St. Kitts and Nevis, Guyana and Barbados — have already pledged their commitment to protect their soil, in close partnership with Isha.

"There are some who use media with the genuine intent of promoting ecological wisdom and the precisely necessary environmental responses," says Saldanha. And given the unshakeable faith that Vasudev's followers have in him, he could be on the brink of being one of the biggest influencers today. Arundhathi Subramanian thinks that it is the "mix of the irreverent and the sacred" that ‘Sadhguru' offers to his followers in a non-hierarchical manner that sets him apart from others.

"There has to be meaningful will on his part to be active on the ecological front. And that could be a way of legitimizing all the other stuff that he is doing in India," says Australian neuroscientist Sumaiya Shaikh. By "other stuff" Shaikh refers to the various allegations of illegal land-grabbing, kidnapping and murder that surround the public image of Jaggi Vasudev in India.

However, it is the eco-influencer aura of Vasudev that seems to be his most exported image. As social media opens up to environmental activism, this seems to work in the favor of Vasudev's outreach model, further distracting responsibility away from the state and market.