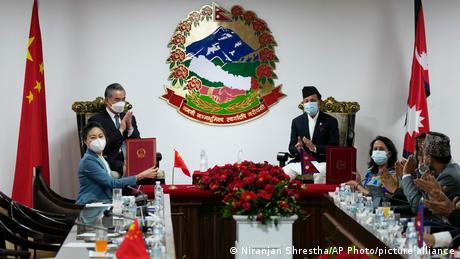 "Nepal should become an example of cooperation between China and South Asia. China is glad to see Nepal develop amicable relations with all countries and play a bigger role in regional and international affairs," China's Foreign Ministry said in a statement on Saturday.

During Wang's visit, Nepal and China signed a nine-point agreement focusing on economic and technical cooperation, as well as assistance with a feasibility study of cross-border rail between the neighbors, who share a 1,389-kilometer (863-mile) border along the Himalayas.

In addition, China and Nepal will conduct a feasibility study to build a high-voltage power transmission line across the Himalayas to facilitate the exchange of electric power, officials said.

Supporters of Nepal's left-wing forces, however, including some allies of Nepal's ruling alliance, questioned Washington's motive over the MCC. They also expressed concerns that the US's Indo-Pacific strategy is intended to encircle China.

Beijing, meanwhile, had warned the grant could be a "Pandora's Box" and alleged that the US was playing "coercive diplomacy" in Nepal.

To ease political tensions both within Nepal and with China about the MCC, Khadka told reporters that he had reassured his Chinese counterpart over the weekend that the US grant "is purely for developmental objectives."

"Nepal does not accept any project that comes with strings attached — political or any other," he said.

Without specifying any country, the ministry added that it opposes efforts to "interfere in Nepal's internal affairs, and play geopolitical games."

Kathmandu-based journalist Anil Giri told DW that China's statement is aimed at the West — in particular the US.

"Though his visit is largely symbolic, Wang's message is clear: Nepal should adopt independent foreign policy and that should not aim to undermine China's legitimate interests in Nepal," Giri said.

During their meetings with Wang, Deuba and Khadka reiterated Nepal's backing for the "one China" principle and stressed that Kathmandu supports China in safeguarding its core interests.

The leaders said they would not allow any forces to use Nepal's territory to undermine China or harm China's interests, according to a statement issued by Nepal's Foreign Ministry.

Despite expectations, Nepal and China made no substantive progress on advancing infrastructure projects in the Himalayan country under China's flagship Belt and Road Initiative (BRI).

Nepal did not mention the BRI in the press statement released after the talks on Saturday, although Chinese media reported that it was part of the talks.

The Kathmandu Post reported that there was no agreement on BRI-related projects after Nepali officials insisted that Nepal be given a mix of grant assistance and low-interest loans.

Nepali officials want to have either grant assistance or a "concessional loan" from China to finance the BRI projects, while their Chinese counterparts prefer a commercial loan, a senior official in Nepal’s Foreign Ministry, who asked not to be named, told DW.

Nepal and China signed up to the BRI Framework Agreement in May 2017 to build various infrastructure projects in Nepal, but outstanding differences between the two countries have hampered progress.

In 2019, Chinese President Xi Jinping paid a state visit to Nepal after both sides agreed to elevate their partnership to the "strategic level." The countries signed a slew of infrastructure projects including the building of a trans-Himalayan railway line.

At least nine projects were shortlisted under the BRI framework, but not a single one has kicked off — primarily because of issues related to funding modalities.

During his latest meeting with the Chinese foreign minister, Nepal's prime minister stressed that a loan is not what Nepal prefers at this point in time and sought more projects from China under grant assistance, according to the prime minister's press coordinator, Govinda Pariyar.

For his part, Wang pledged China's continued support for Nepal's participation in the BRI project.