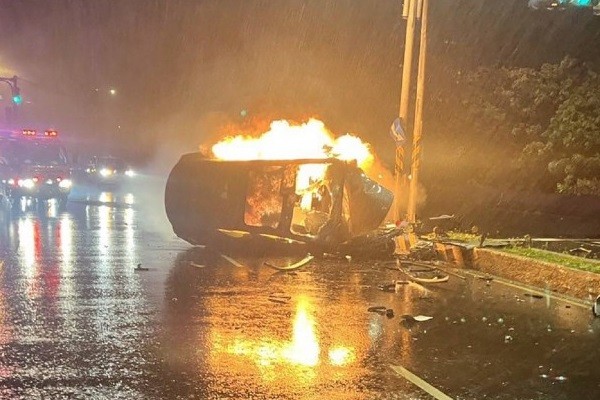 TAIPEI (Taiwan News) — A drunk driver was pulled from his car by a bystander just moments before it was fully engulfed by flames in New Taipei City on Monday morning (March 28).

According to police, the 53-year-old driver, surnamed Lee (李), had spent the evening drinking and partying with friends in Taipei's Muzha area. At 4:10 a.m. on Monday as he was driving his Tesla Model X home, he lost control of the vehicle and collided with a traffic median at the intersection of Wenshan Road and Xinguang Road in New Taipei City's Shenkeng District, reported UDN.

The car flipped on its side and burst into flames. A passerby noticed that the driver was still inside, rushed over to pull him from the vehicle, and dialed 119 for emergency assistance.

Moments later, the car was completely consumed by flames. The fire department was not able to completely extinguish the blaze until 4:38 p.m.

Lee suffered fractures to his face, arms, and legs, but none of his injuries were deemed life-threatening. After police administered a breathalyzer test, they found that he had a blood-alcohol level of 0.7 milligrams per liter, nearly three times the legal limit of 0.25 mg/l.

Police said that based on an initial investigation, they believe Lee lost control due to the rainy weather, slippery roads, and poor visibility. He is being investigated for offenses against public safety (公共危險罪).