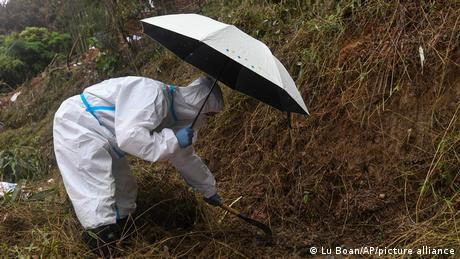 The second "black box" has been recovered from a China Eastern Boeing 737-800 passenger plane that crashed last week, Chinese state media reported on Sunday. All 132 people on board have been confirmed dead.

"The second black box from China Eastern flight MU5735 was recovered on March 27," Xinhua news agency said. The flight was en route from the city of Kunming, in southeastern China, to the major manufacturing hub of Guangzhou when it crashed.

The plane had two flight recorders: one in the rear passenger cabin to track flight data, and a voice recorder in the cockpit. The cockpit voice recorder was found on Wednesday and sent to Beijing for analysis.

The flight data recorder — an orange cylinder — was found 1.5 meters (5 feet) underground on a mountain slope during a search that was complicated by rainy and muddy conditions, officials said. It contains data such as speed, altitude and heading.

The recovery of both recorders will help investigators determine what caused the plane to plummet from 29,000 feet (8,800 meters) into a remote, forested mountainside in southern China in just over a minute.

Hundreds of people have joined the search at the scene of the accident, including firefighters, doctors and investigators. They are attempting to recover human remains and the wreckage of the plane.

On Saturday, the Chinese Civil Aviation Administration confirmed that all 123 passengers and nine crew members on board had died. DNA testing has confirmed the identity of 120 people, the CAAC said, adding that all were Chinese nationals.