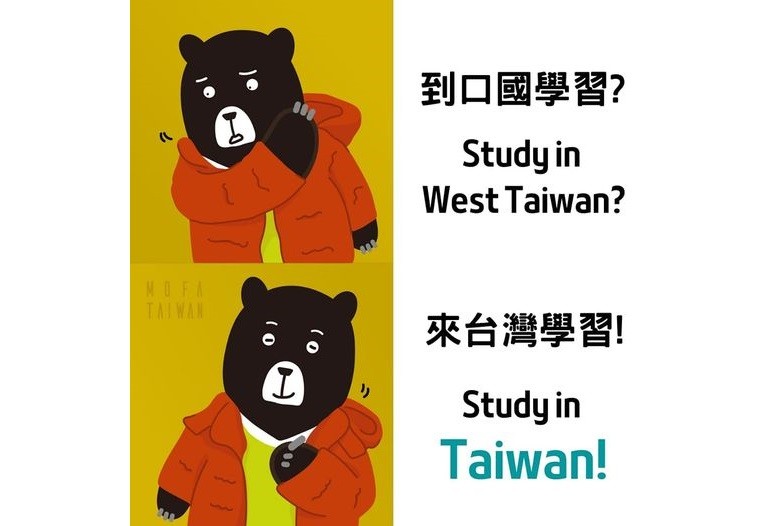 TAIPEI (Taiwan News) — A meme posted by the Ministry of Foreign Affairs (MOFA) on its Facebook that refers to China as “West Taiwan” has gone viral.

The meme, which uses a popular format derived from the music video for Canadian rapper Drake’s song "Hotline Bling," features an illustration of a Formosan black bear repelled by the phrase “Study in West Taiwan?” and approving “Study in Taiwan!”

The meme’s Chinese text refers to China as “口國” (“mouth country”) rather than “中國,” poking fun at China’s censorship policy. In China, censored words or terms are replaced with characters such as empty boxes or asterisks, which caused controversy in February when dialogues in a television series mentioning the word “kill” was replaced with the Chinese character for “mouth” (口), inadvertently giving the dialogues a suggestive meaning.

The post went viral on Facebook and generated widespread online discussion. It was also shared to 9GAG, a popular social media platform known for featuring memes, where it quickly began to trend.

Supporters hailed the poster for coming up with such an “interesting” and “funny” idea. Singer Chen Chia-hsing (陳嘉行) commented, “Who gave the social media manager the right to be so excellent!”

Others thought an official government entity should not “stoop so low” as to make such a joke, while some believed that referring to China as “West Taiwan” creates an undesirable link between the two countries.

Facebook user Ting-Yu Kuo commented, “Even though I like to badmouth Mouth Country as well, I don’t think this is how MOFA should be. MOFA represents Taiwan’s image and is responsible for Taiwan’s outward, international relationships. ‘West Taiwan’ isn’t something MOFA should be saying so casually. MOFA stepped out of line this time.”

Ai Mi Ou (艾米歐) wrote, “But I don’t want there to be any link to Mouth Country. Using the term West Taiwan feels like getting poop stuck on us.”

However, some users believed the post’s style matches Foreign Minister Joseph Wu’s (吳釗燮). Mori Chang commented, “The social media manager probably got approval from a supervisor before posting this, as no one working in the government dares to decide on their own and post things recklessly… I feel like this post matches the minister’s style.”

The text of the post introduced the Taiwan-U.S. Education Initiative, promoting relevant programs and scholarship opportunities to study Mandarin in Taiwan: “The second high-level dialogue on the Taiwan-U.S. Education Initiative took place at the beginning of this month. A memorandum of understanding signed in December of 2020 launched the initiative, and five working group meetings have been held over the past year.”

“The U.S. State Department will also add 55 places for young people from the U.S. to visit Taiwan to study Mandarin and engage in exchange with Taiwan scholars under the Gilman Scholarship.” MOFA added that the Taiwan-U.S. cooperation on education has seen increased scholarship quotas, expansions to Fullbright Program operations in Taiwan, and the establishment of Taiwan Centers for Mandarin Learning in the U.S.