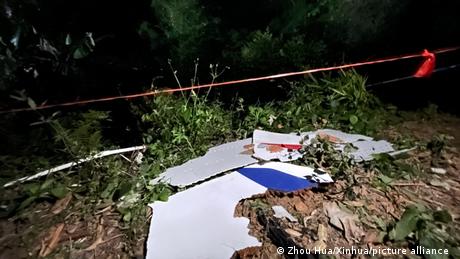 Hu Zhenjiang, deputy director of the CAAC, told reporters that there had been no signs of life at the crash site in a heavily forested part of the Guangxi region, near the city of Wuzhou.

"The identity of 120 victims has been determined by DNA identification," he said.

State media said the 123 passengers and 9 crew members had all died in the crash.

What caused the crash of flight MU5735?

The crash, the deadliest in China for almost 30 years, left authorities puzzled over the cause.

The search for clues has been hampered by the rugged terrain and mud at the crash site. Search teams employed machinery and their hands to dig out parts of the plane.

Authorities said they had not found any evidence of conventional explosives at the scene.

Aviation officials said they had found one of the two black boxes, the cockpit voice recorder, which is expected to offer up some details behind the incident. It has been sent to Beijing for examination.

Officials also believe they will be able to track down the other black box, the flight data recorder, after finding the signal from the emergency location transmitter that had been installed close to it, Zhu Tao, director of the Aviation Safety Office at the CAAC said.

Chinese President Xi Jinping ordered an investigation into the cause of the crash and the country's aviation authorities said they would carry out a full check-up of its vast passenger fleet.

This is a breaking news article and will be updated...