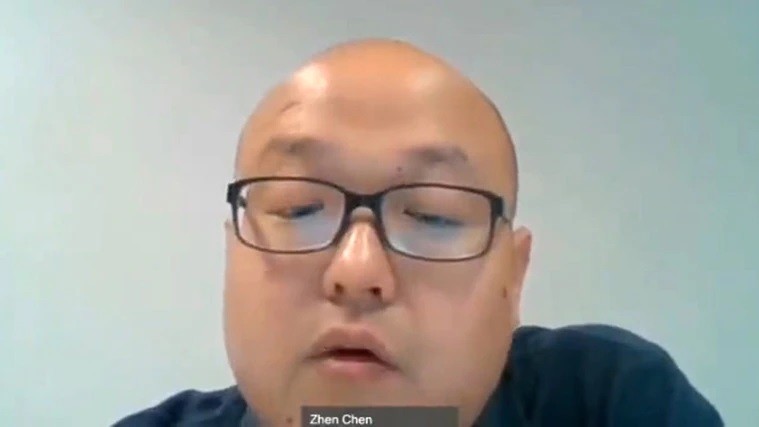 TAIPEI (Taiwan News) — A video surfaced on Friday (March 25) showing a Chinese professor coerce a Taiwanese student into changing his city and country of origin on his paper from "Taipei, Taiwan" to "Taipei, China."

That day, a Chinese adjunct professor Chen Zhen (陳蓁) from Milan Polytechnic posted a video on Telegram showing him lecture a Taiwanese student surnamed Wang (王) on how Taiwan is allegedly part of China during a video call. During the video, Chen claims that Wang has no legal right to refer to Taiwan as a country, but denies that he is bullying the student into changing the listing of his country of origin in his research paper.

The video starts with Chen speaking to the students in the class in English and then singling out Wang to say that he wants to speak with the Taiwanese student one-on-one in Mandarin. Chen, who teaches in the school of Civil Architecture, then points out that he had given a template for the paper that called on students to include the city and country they are from and that he was surprised to see that Wang had entered "Taipei, Taiwan."

Chen then began a lecture on why he thinks Taiwan cannot be listed as a separate country. First, he claimed that the "entire EU, including Italy, believes that Taiwan belongs to China" and that no EU government officially recognizes Taiwan as a country.

However, a European country that is not a member of the EU, the Vatican, does in fact recognize Taiwan as a country. His second rationale was that the current Republic of China (ROC) Constitution does not list Taiwan as an independent country, but rather a "province" of the ROC.

This is not entirely accurate as Taiwan is in fact not mentioned in the original Constitution at all. There are references to provinces, but those are Mongolia and Tibet. It should also be pointed out that at no time in history has Taiwan been ruled by the People's Republic of China, and therefore both countries have their own separate constitutions.

In the Additional Articles of the Constitution of the Republic of China there is frequent reference to the "free area," which is the territories under the control of the ROC government and has been interpreted to mean Taiwan, Penghu, and other outer islands. The sole mention of Taiwan appears under Article 9: "The modifications of the functions, operations, and organization of the Taiwan Provincial Government may be specified by law."

Chen claims to understand that Wang's generation has been "educated to have your national identity stand at odds with our mainland, right?" He then argues that because Taiwan has never been listed as the name of a country by the EU or the ROC constitution, from a legal standpoint, Taiwan is not a country.

He said that the Taiwan government can "play edge ball, play word games, and fool the people," but the Tsai Ing-wen (蔡英文) administration "dare not revise the constitution." The professor emphasized that his lecture had nothing to do with the paper and research or impact Wang's grades, but that he felt compelled to speak out "as a Chinese."

Chen denied that he was using his position as Wang's teacher to coerce the student into changing the entry for Taiwan. "I also hope you do not take this as if I am bullying you from the perspective of a teacher, and I mistreat you," said Chen.

The professor then insisted that his speech was just an attempt to communicate with Wang "as an exchange between people." Beyond his teaching career, Chen is also the co-founder and CEO of RECS Architects, an architecture firm with operations in Italy and China.

It appears Chen's conversation with Wang had an impact, as he changed the location next to his name to "Taipei, China" in his paper titled "A Comparative Study of Iranian Gardens and Chinese Gardens." 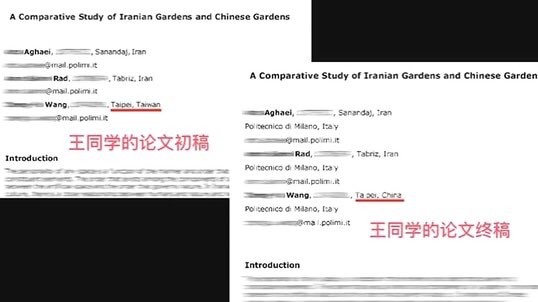 Chinese Adjunct Professor Chen Zhen (陳蓁) of 〔錯誤字元無法儲存〕〔錯誤字元無法儲存〕 Milan Polytechnic (Milano Politecnico) lectured a 〔錯誤字元無法儲存〕〔錯誤字元無法儲存〕 student Wang — who had written on his paper he’s from Taipei, Taiwan — on how Taiwan is part of China during a video call, claiming he’s not bullying Wang as a teacher.