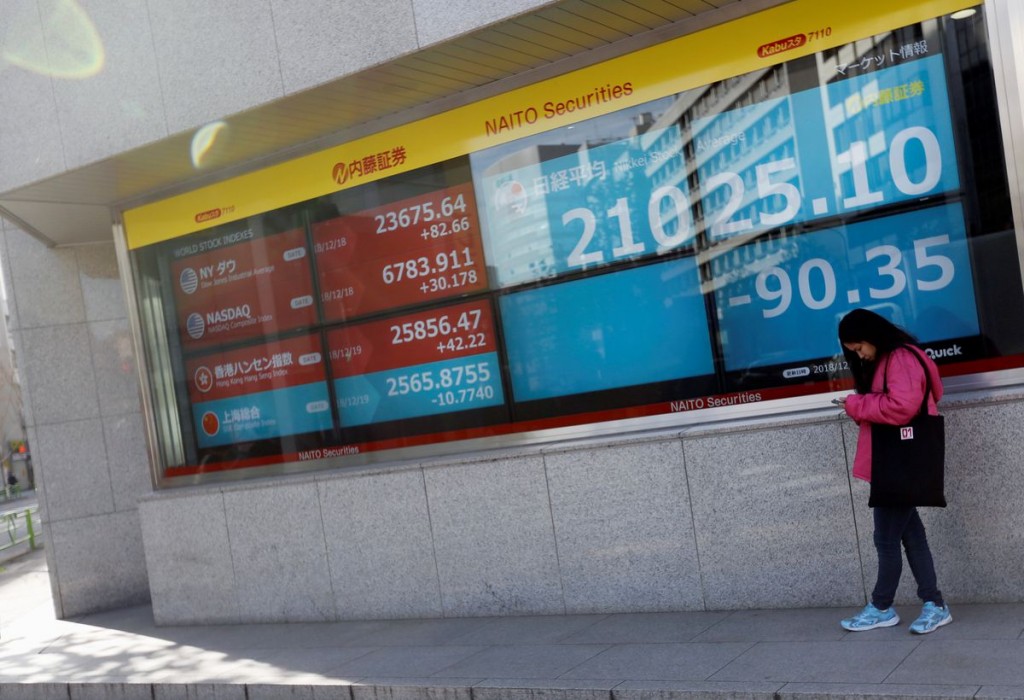 Asian shares were headed for a second successive week of gains on Friday, though trading was choppy amid hawkish U.S. monetary policy, shifts in Chinese economic policy, and ongoing ructions in commodity markets due to the war in Ukraine.

MSCI's broadest index of Asia-Pacific shares outside Japan (.MIAPJ0000PUS) traded flat, but it's up 1% on the week.

Hong Kong shares (.HSI) were a drag on the regional benchmark, falling 0.5%, weighed down by tech stocks (.HSTECH), as U.S. and Hong Kong dual listed names took a hit from renewed fears that a row over audit records will force them to delist in the United States.

"In terms of Asia we have seen asset prices stabilise a little bit this week following last week's statement from the Chinese vice premier. This may not be sustainable unless we see additional easing and have better visibility on the regulatory front, but it did seem to have the desired effect in terms f limiting downside risks," said Carlos Casanova, senior Asia economist at UBP.

"Though what we are starting to see is a little more caution from global investors when it comes to the U.S. economy, and what that means for Asia," he added.

Investors were also watching to see whether the Bank of Japan would intervene to buy Japanese government bonds (JGB) as its yield target came under pressure.

The yield on 10 year JGBs rose to 0.235% on Friday morning, exceeding the level at which the BOJ offered to buy an unlimited amount of JGBs at 0.25% on Feb. 10., part of a policy to maintain interest rates at their current ultra-low levels.

Japanese bond yields are being pulled higher by U.S. Treasury yields, which have risen along with expectations for a more aggressive pace of rate hikes by the U.S. Federal Reserve.

Chicago Fed President Charles Evans was the latest U.S. policymaker to sound more hawkish, saying on Thursday the Fed needs to raise interest rates "in a timely fashion" this year and in 2023 to curb high inflation before it is embedded in U.S. psychology and becomes even harder to get rid of.

The divergence between U.S. and Japanese monetary policy has weighed on the yen. On Friday, the dollar climbed a further 0.41% to 121.84 yen, a new multi year high. Higher commodity prices driven by the war in Ukraine is also hurting the Japanese currency, as Japan imports the bulk of its energy.

The dollar's gains against other currencies have been less dramatic, however, with the U.S. currency's index measure against six peers down a little at 98.536.

Overnight the three main U.S. stock indexes each rallied more than 1%, as investors snapped up beaten-down shares of chipmakers and big growth names and supported by a fall in oil prices.

Oil continued to slide a little, as the United States and allies considered releasing more oil from storage to cool markets. Brent crude falling 0.22% to $118.77 per barrel and U.S. crude down 0.5% to $111.74 a barrel, but prices were still very high by historic standards.