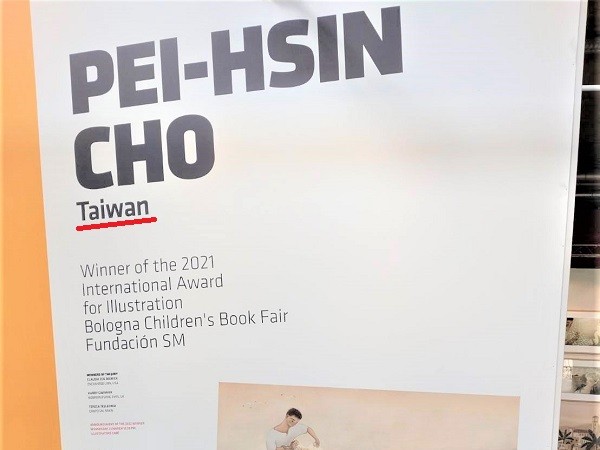 TAIPEI (Taiwan News) — The Ministry of Foreign Affairs (MOFA) on Thursday (March 24) condemned China for "sticking its dirty political hands" into an art exhibition in Italy by forcing the removal of Taiwan as an artist's country of origin.

Earlier that day, reports surfaced that China had demanded that the Bologna City government change illustrator Pei-Hsin Cho's (卓霈欣) listing of her country of origin as "China Taiwan" at a solo exhibition that is part of the 59th Bologna Children's Book Fair. Feeling "helpless," book fair organizers decided on a "compromise" in which they did not list any country for Cho, according to independent lawmaker Huang Kuo-shu (黃國書).

In response, Taiwan's representative office in Italy submitted a formal complaint to the Italian government and organizers and demanded that they rectify the country listing for Cho as soon as possible. In a statement issued that day, MOFA expressed severe condemnation and deep regret for China's efforts to "stick its filthy political hands into international cultural activities."

The ministry stated that it would instruct the representative office to continue to maintain the dignity of Taiwan and ensure the fair treatment of Taiwan's exhibitors through various channels. MOFA reiterated that "Taiwan, the Republic of China, is a sovereign state and is not subordinate the People's Republic of China."

It then pointed out that the Chinese government has never ruled Taiwan "for one day, and naturally has no right to claim to represent Taiwan in the international arena or diminish the name of the country used by Taiwanese people to participate in activities." The ministry stated that Beijing has used "improper pressure" to "abuse" the fields of culture and arts and vowed that "China's hegemonic suppression will be spurned by the people of Taiwan and the international community."

MOFA asserted that Taiwan and Italy share the universal values of democracy, freedom, and human rights and called on relevant Italian units to "show their courage, reject China's inappropriate bullying, and strengthen cooperation and cultural exchanges with partners in the democratic camp such as Taiwan to jointly resist political oppression."