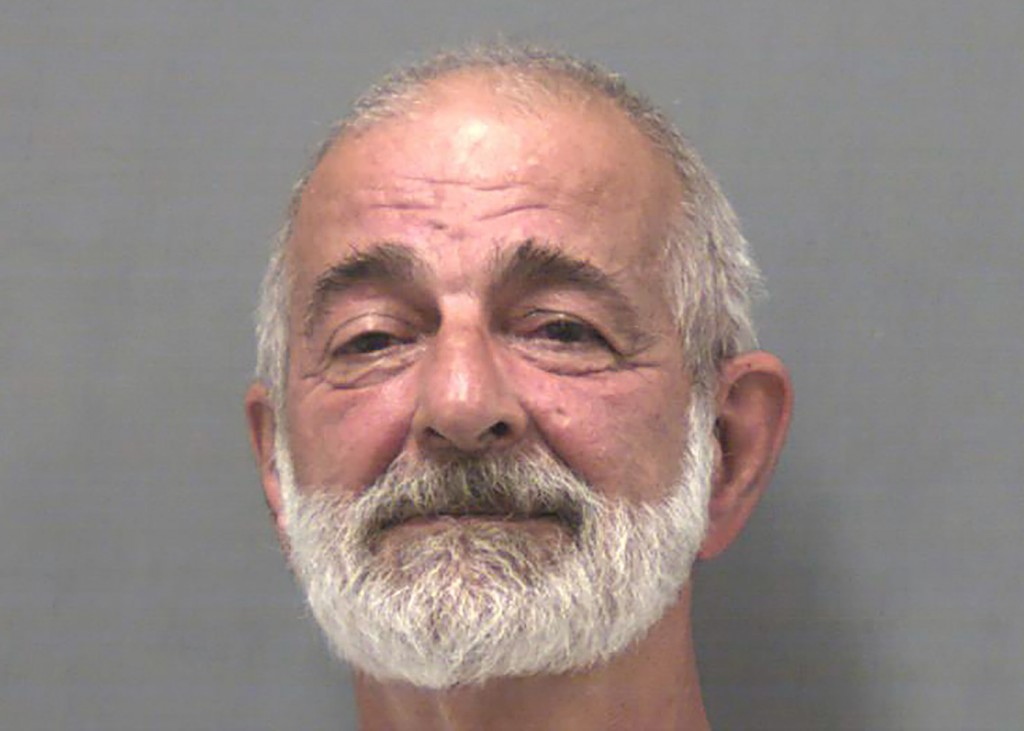 NEWARK, N.J. (AP) — A career criminal whose lengthy rap sheet includes bank robberies, a murder conspiracy and a jailbreak plot pleaded guilty Thursday to killing a political consultant in exchange for money in 2014, adding another chapter to a case that has roiled New Jersey politics.

Appearing by videoconference from a jail in New York — where he is awaiting sentencing on a bank robbery in Connecticut — 73-year-old George Bratsenis said he and another man accepted thousands of dollars from another political consultant, Sean Caddle, in exchange for killing Michael Galdieri. Galdieri was stabbed to death in his Jersey City apartment, which was then set on fire.

Caddle pleaded guilty in January but didn't explain why he wanted his onetime friend dead.

A man who served time in a New Jersey prison with Bratsenis in the early 2000s, Bomani Africa, also pleaded guilty in the killing in January. He named Bratsenis as the accomplice who helped kill Galdieri.

Clad in a T-shirt, the white-bearded and bespectacled Bratsenis answered “Yes, sir,” when assistant U.S. Attorney Lee Cortes asked him if he was pleading guilty to conspiracy to commit murder for hire.

“You all have a nice day. Take it easy," Bratsenis told the group assembled on the videoconference as the proceeding ended.

The revelations about Galdieri's killing jolted political circles in New Jersey, a state infamous for dozens of political corruption convictions in the past three decades as well as skullduggery like the 2013 “Bridgegate” scandal involving traffic jams purposely created near the busy George Washington Bridge for political retribution.

Chief among the questions surrounding the case: Why did Caddle set the plot in motion? What connected him to the two ex-convicts who allegedly carried out the killing? And why have federal prosecutors said so little about the crime?

Caddle's plea agreement referred briefly and opaquely to him providing investigators with information, but didn't say what. The U.S. attorney's office has declined comment, as has Bratsenis's attorney.

Less mysterious is the extraordinary depth and breadth of Bratsenis’s criminal past.

After serving in the Marines from 1968 to 1974, Bratsenis began racking up convictions in Connecticut and New Jersey for drug, robbery and weapons offenses.

In the summer of 1980, according to Connecticut authorities, Bratsenis conspired with a former Stamford police lieutenant and two other men to murder a reputed drug courier, David Avnayim, whose body was found in the trunk of a car in Redding, west of New Haven.

Bratsenis wasn’t charged until four years later, but eventually pleaded guilty to murder conspiracy. The ex-police lieutenant, Lawrence Hogan, had previously been convicted of conspiring to buy 2 pounds of heroin from an undercover agent but had the conviction reversed on appeal and then died not long after the murder charges were filed, of natural causes.

Private investigator Vito Colucci, who as a Stamford police officer in the late 1970s wore a wire to help expose rampant corruption in the city's police department, remembered Bratsenis and the people he ran with at the time as being “the kind of guys who would walk down the street and if someone offered them $1,500 to beat someone up, they’d say ‘OK!’ and go do it."

By the time he was charged with Avnayim's murder, Bratsenis was already behind bars, the result of a conviction for robbing a jewelry store in Little Falls, New Jersey, in 1983.

While jailed in New Jersey, he plotted an escape attempt in which he planned to hide a bag of drugs in his rectum and explode it during an appearance in court, forcing authorities to take him to a hospital where gunmen hired by his sister would spring him, according to published reports at the time.

The plot was foiled and Bratsenis eventually pleaded guilty to conspiracy. His sister received three years’ probation, according to court records.

By the late 2000s, Bratsenis was in Northern State Prison in Newark, New Jersey, having spent more than 25 years behind bars. It was there, authorities in Connecticut alleged in court filings, that he befriended Africa, a Philadelphian, and the two began planning to rob banks when they were paroled.

Also housed at the prison during that time period was James Caddle, Sean Caddle’s brother, although it’s not known whether he knew Bratsenis or Africa. James Caddle died in 2016, according to an obituary posted online.

After being released from prison, Africa and Bratsenis robbed two banks in Connecticut in 2014, including one weeks before Galdieri's killing. Bratsenis was arrested after one of the robberies and has been jailed ever since. Both men have pleaded guilty and are awaiting sentencing, with Bratsenis's scheduled for next month.

Bratsenis is being held at a federal detention center in New York City.

Last month, the tall, white-haired Bratsenis shuffled into court in Newark in a prison uniform and wearing shackles — but the proceeding ended abruptly with no explanation given after attorneys met in the judge's chambers.

In court papers in the bank robbery case, Bratsenis' attorney has argued for a sentence of time served, noting that his client has been diagnosed with cancer and a respiratory disease.

"His time incarcerated, his cancer diagnosis, and his age have all caused Mr. Bratsenis to reflect on his long and difficult life, the mistakes he has made, and how he would like to live out the rest of it," attorney Charles Kurmay wrote.