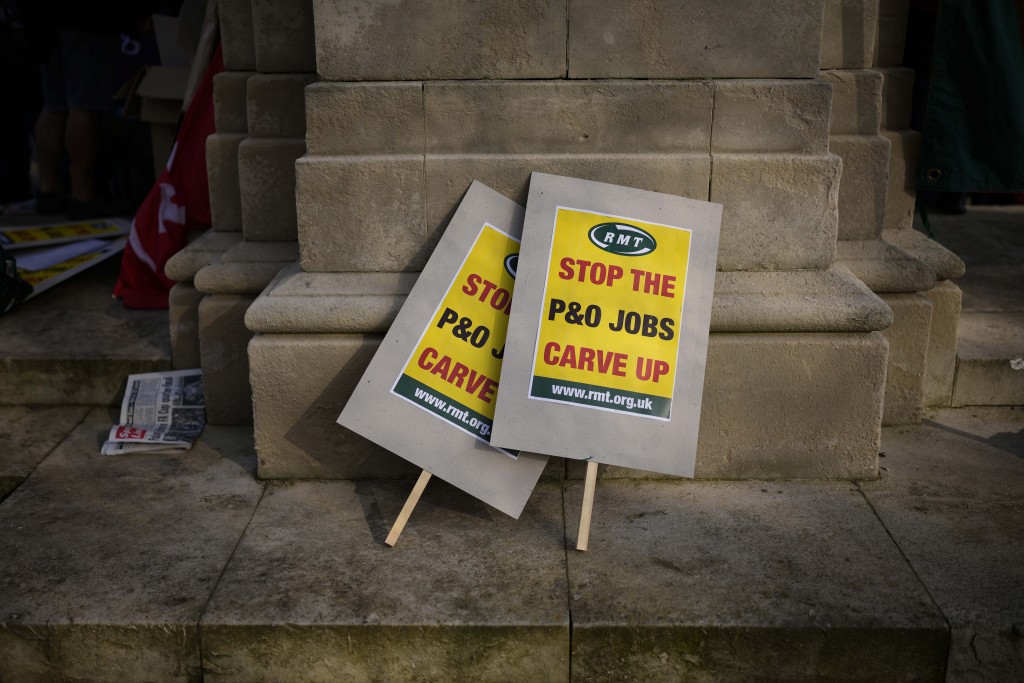 LONDON (AP) — The head of a ferry operator at the center of a bitter labor dispute stunned U.K. lawmakers Thursday when he acknowledged that the company chose to ignore the law and labor contracts when it fired 786 workers without consulting with them in advance.

P&O Ferries Chief Executive Peter Hebblethwaite said while under intense questioning from members of a parliamentary committee that the company decided not to discuss its plans with workers because it knew labor unions would never agree. Lawmakers repeatedly characterized the move as a willful decision to break the law.

The company, which operates in Britain and is owned by a subsidiary of Dubai-based DP World, dismissed the workers as part of a cost-cutting plan it says was necessary to save the business and 2,200 other jobs. The fired seafarers are to be replaced by cheaper staff provided by a third-party crew provider.

“There is absolutely no doubt that we we were required to consult with the unions,” Hebblethwaite said. “We chose not to consult and we … will compensate everybody in full for that.”

The cuts — which came after P&O received millions of pounds of British government aid during the COVID-19 pandemic — have caused outrage and sparked protests by trade unions at U.K. ports. P&O canceled all services between Britain, Ireland and continental Europe after last week’s announcement, disrupting the movement of travelers and goods. Many routes are still shut a week later.

Trade unions have long objected to “fire and rehire” plans in which companies cut costs by firing workers then re-hiring them under less generous terms. Under British labor law, such extreme action is only meant to occur after extensive consultations with employees and unions.

P&O’s decision to ignore those rules prompted scathing questions from members of the British Parliament committee.

In one exchange, Labour lawmaker Andy McDonald challenged Hebblethwaite to explain why the company ignored its legal obligations to consult with workers.

“When you get in your car and drive down the motorway, you see the 70 mile an hour sign, do you decide that that’s not going to apply to me, I’m going to do 90 because I think it’s important that I do that? Is that how you go about your life?” McDonald asked.

Huw Merriman, a member of Parliament from the governing Conservative Party, said Hebblethwaite should “consider his position.”

“It is untenable to come to Parliament to say you have decided to break the law, you have no regrets,” Merriman told the BBC. “We can’t have companies run by people like that, so he needs to hand his card in.”

Hebblethwaite said P&O has lost hundreds of millions of dollars over the past two years and it needed to change its business model to survive. When asked whether the company could survive the reputational damage from its recent actions, he acknowledged it would be difficult.

Business Minister Kwasi Kwarteng last week warned P&O that the company could face unlimited fines and other penalties if it was found to have violated laws requiring it to notify the government in advance before any large-scale firings.

P&O responded by saying the company didn’t believe it had violated the law because all the ships on which the crew members worked were registered outside the U.K.

The seafarers worked on eight ships registered in the Bahamas, Bermuda and Cyprus. They were employed by three P&O units incorporated in Jersey, a self-governing crown dependency that isn’t part of the U.K.

Crew members employed by two other subsidiaries based in France and the Netherlands weren’t fired, P&O said.

P&O has said it will pay the fired workers 13 weeks' salary to compensate for the lack of advance notice, and another 13 weeks' salary in lieu of consultation. In addition, P&O says dismissed crew members will receive 2½ weeks' salary for every year of service, instead of the legally required 1½ weeks.

The workers will receive a minimum of 15,000 pounds, and some long-serving crew members will get as much as 170,000 pounds, Hebblethwaite said.