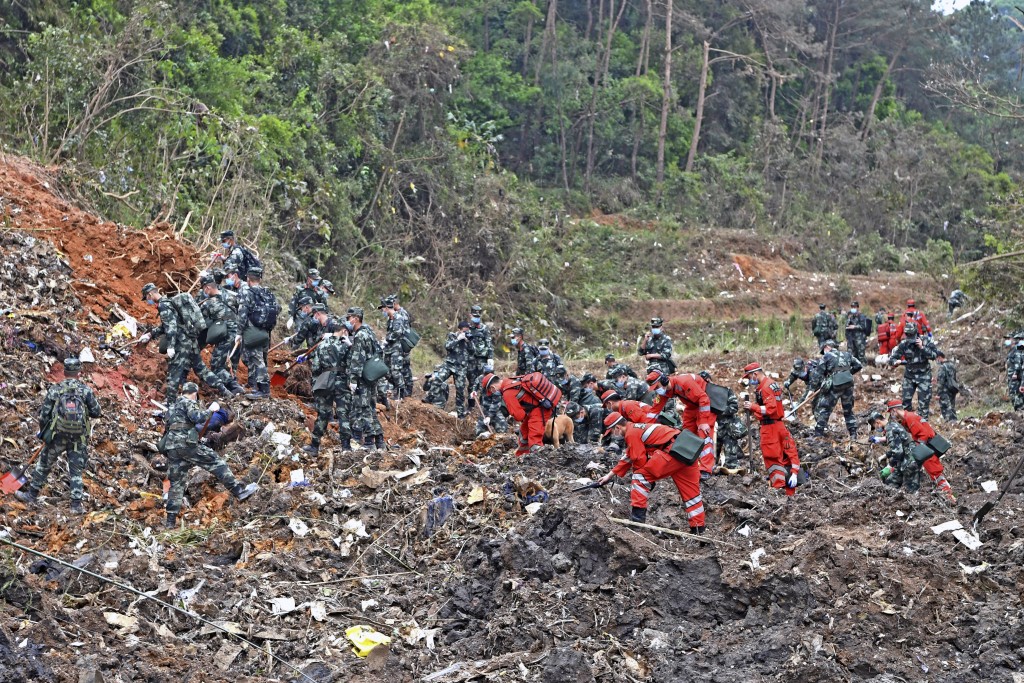 WUZHOU, China, March 23 (Reuters) - Chinese emergency workers found on Wednesday one of two black boxes from a China Eastern Airlines (600115.SS) plane that crashed with 132 people onboard, but U.S. efforts to join the investigation are on hold because of COVID-19 quarantine rules.

The black box device recovered is the plane's cockpit voice recorder, based on an early assessment, a Civil Aviation Administration of China (CAAC) official told a media briefing, adding that the recording material appeared to have survived impact in relatively good shape.

Flight MU5735 was en route from the southwestern city of Kunming to Guangzhou on the coast on Monday when the Boeing 737-800 jet suddenly plunged from cruising altitude at about the time when it should have started its descent before landing.

The cause of the crash has yet to be determined. Most of the jet appears to have disintegrated upon impact, although some debris and human remains have been found.

"An initial inspection showed that the exterior of the recorder has been severely damaged, but the storage units, while also damaged to some extent, are relatively complete," CAAC official Zhu Tao said.

The black box is being sent to an institute in Beijing for decoding, although how long that takes would depend on the extent of the damage, Zhu said.

Weather along the flight path on Monday did not pose any danger to the aircraft and air controllers had communication with it after take-off and prior to its rapid descent, said Mao Yanfeng, head of aircraft investigation at CAAC.

U.S. Transportation Secretary Pete Buttigieg said Wednesday that Chinese authorities had invited the U.S. National Transportation Safety Board (NTSB) to take part in the investigation of the crash, adding that he was very encouraged by the invitation to be on the ground in China.

The NTSB, however, later said it had not yet determined if investigators would travel to China in light of visa and quarantine requirements.

"We are working with the Department of State to address those issues with the Chinese government before any travel will be determined," the NTSB said.

China has very few COVID cases and strict requirements for at least two weeks of hotel quarantine on arrival for citizens and foreigners. A World Health Organization team that last year investigated the origins of the pandemic had to quarantine first. read more

The crash investigation is being led by China but the United States is invited to take part because the plane was manufactured there.

The Chinese authorities have said the plane, which did not respond to repeated calls during its descent, met airworthiness standards before take-off and all three pilots - one more than normally required on a 737 - were in good health.

The captain, hired in January 2018, had 6,709 hours flying experience, while the first and second officers had 31,769 hours and 556 hours, respectively, a China Eastern official said.

"From what we know, the performance of the three pilots had been good and their family life relatively harmonious," the official said.

One co-pilot was an observer to build up experience, the airline said.

China Eastern tightened precautions after the crash, requiring two senior captains and a senior co-pilot on a three-person crew on some aircraft types, state-backed The Paper said.

Heavy rain in southern China on Wednesday hampered the search for victims and black boxes, with wet weather forecast to last the rest of the week.

Grief-stricken relatives visited the site, among them a retiree surnamed Zhang from Shenzhen, whose eyes filled with tears as he told Reuters his nephew was onboard. read more

"I hope the country can thoroughly investigate this matter and find out whether it was the manufacturer's fault or it was a maintenance problem," Zhang said.

FlightRadar24 data showed the aircraft plunged rapidly at a rate of 31,000 feet per minute.

China has improved air safety over the past two decades, and Monday's disaster was the first major crash in a dozen years.

China Eastern and two subsidiaries have grounded their fleet of more than 200 Boeing (BA.N) 737-800 jets. An airline official said the move was more an emergency reaction to the crash rather than a response to any safety issue.

The disaster comes as Boeing is working to recover from several crises, notably safety concerns over its 737 MAX model following two deadly crashes and the impact on travel from the pandemic.