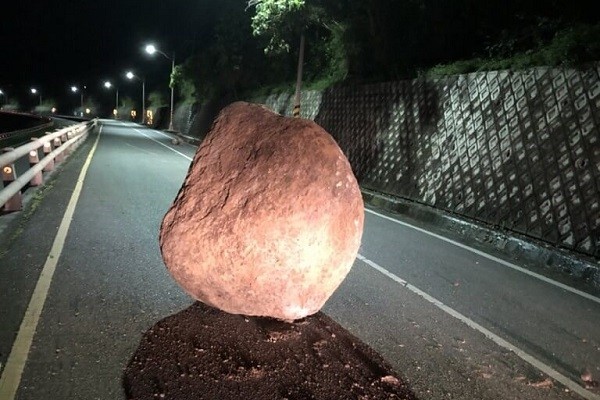 TAIPEI (Taiwan News) — A massive boulder fell on a highway in Taitung early this morning (March 23) following a magnitude 6.6 earthquake.

The quake struck at 1:41 a.m. just off the southeast coast, followed by magnitude 5.7, 6.1, 4.9, and 4.7 aftershocks within five minutes. Since the fourth aftershock, more than 100 have been reported in Hualien and Taitung counties as of time of writing, with two measuring 5.8 on the Richter scale.

Reports of damage and injuries have been streaming in, including an 88-year-old resident who suffered head injuries from falling glass. In Hualien, there have been many reports of water tanks and scooters being knocked over as well as rockfalls, but the most significant damage was the collapse of the new Yuxing Bridge (玉興橋) in Yuli Township.

In Taitung, there have been reports of landslides and rockfalls in Changbin Township and Donghe Township along Provincial Highway 11, reported CNA. In Changbin Township, a 1.8-meter-high, 10-ton boulder fell onto the Yongfu section of the highway, blocking an entire lane.

Elsewhere in Changbin Township, power outages were reported in the Nanzhuhu neighborhood, while rockfalls and damage to retaining walls were reported on the stretch of highway between Tianzu and Chihcaopu.

Large cracks in the asphalt could be seen at the 32.5-kilometer mark of Provincial Highway 30. After being inspected by staff from the Directorate General of Highways, the decision was made to close that section of road for repairs. It is expected to reopen by 5 p.m.

There have also been many reports of residential water tanks being knocked over, water pipes bursting, and supermarket goods flying off of shelves in Taitung.

In Pingtung 1,203 households on Huashan, Huayi, Huaer, and Zhungjing streets lost power. However, power was restored to these areas by 5 a.m.