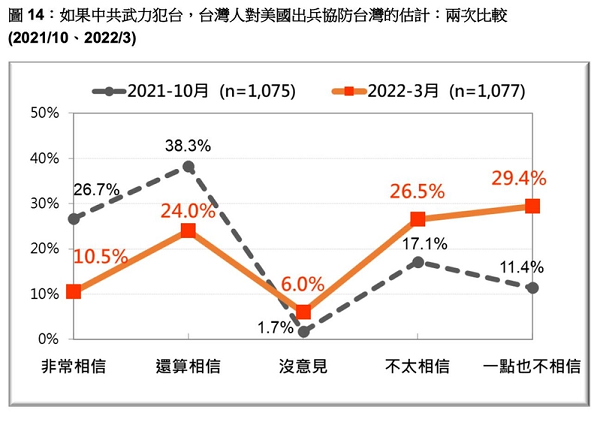 TAIPEI (Taiwan News) — Scenes of Ukrainians fighting against the invading Russian military have made Taiwanese less hopeful of American support in the event of a war in Taiwan, and this is reflected in the results of the latest poll by the Taiwanese Public Opinion Foundation (TPOF).

TPOF Chairman You Ying-lung (游盈隆) said these responses differ from those given to the same question in an October poll. In that poll, as many as 65% of those surveyed believed the U.S. would send troops to defend Taiwan, while only 29% did not think it would.

Further analysis of the two polls indicates that the number of Taiwanese who believe the U.S. will deploy boots on the ground in Taiwan if a war broke out has dropped by 30.5 percentage points. Meanwhile, the number of those who believe the U.S. will not do so has risen by 27.4 percentage points, You said, noting that in just six months, Taiwanese have gone from being very optimistic about America standing in solidarity with Taiwan to being quite pessimistic.

The poll was conducted via telephone interview on March 14-15. A total of 1,077 people aged 20 and older living in Taiwan were surveyed. The poll has a 95% confidence rating with a 2.99% margin of error.