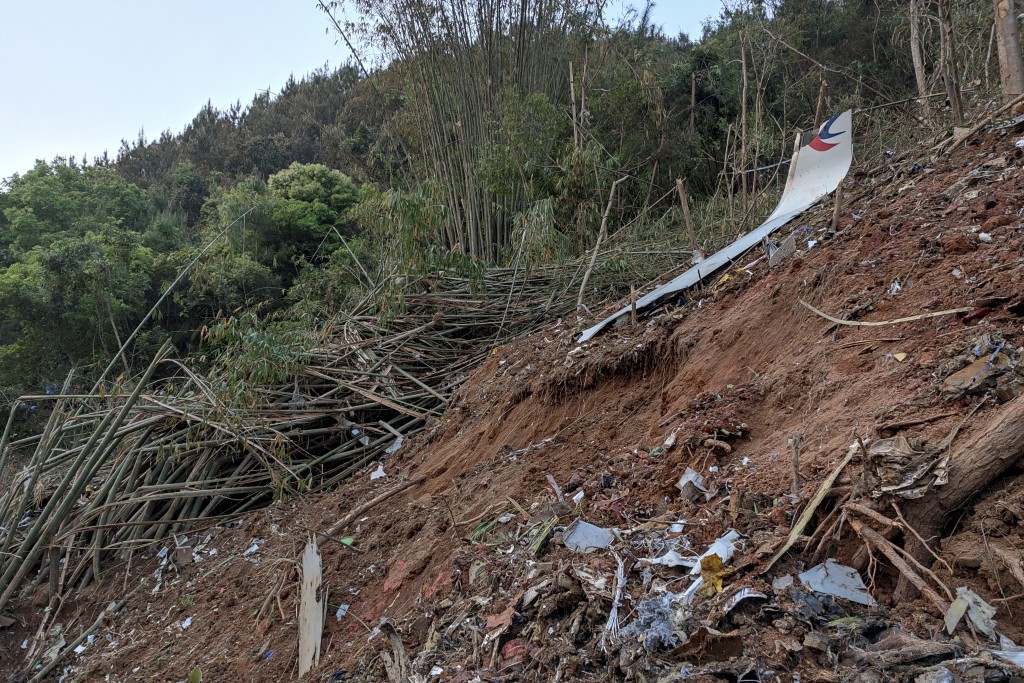 GUANGZHOU, China, March 21 (Reuters) - A China Eastern Airlines (600115.SS) Boeing 737-800 with 132 people on board crashed in mountains in southern China on a domestic flight on Monday after a sudden descent from cruising altitude. Media said there were no signs of survivors.

The airline said it deeply mourned the passengers and crew, without specifying how many people had been killed on the jet, an earlier model than the 737 MAX with a strong safety record.

Boeing (BA.N) said it was ready to assist China Eastern and was in contact with U.S. transportation safety regulators over the incident.

Chinese media carried brief highway video footage from a vehicle's dashcam apparently showing a jet diving to the ground behind trees at an angle of about 35 degrees off vertical. Reuters could not immediately verify the footage.

The plane was en route from the southwestern city of Kunming, capital of Yunnan province, to Guangzhou, capital of Guangdong, bordering Hong Kong, when it crashed.

China Eastern said the cause of the crash was under investigation. Such accidents typically involve multiple factors and experts warned it was far too early to draw any conclusions on the potential causes, especially in light of the scarce information available.

Investigators will be scouring the wreckage and flight recorders for factors that could have caused the plane to plummet vertically and slam into the mountains at high speed.

The airline said it had sent a working group to the site. There were no foreigners on the flight, Chinese state television reported, citing China Eastern.

Relatives, friends and colleagues of passengers gathered late on Monday in a cordoned off area at the jet's destination, Guangzhou Baiyun International Airport.

One man surnamed Yan said that a colleague had been on the plane, and that he had notified the 29-year-old's mother.

"When she picked up the phone, she choked up," said Yan, adding that he had a "heavy heart" when he heard the news.

China Eastern staff were making arrangements for relatives who wished to travel to the crash site on Tuesday, Yan said. Reuters was not able to independently verify Yan's identity.

The aircraft, with 123 passengers and nine crew on board, lost contact over the city of Wuzhou, China's Civil Aviation Administration of China (CAAC) and the airline said.

The plane, which Flightradar24 said was six years old, had been cruising at 29,100 feet at 0620 GMT. It then began a rapid descent to 7,425 feet before recovering to 8,600 feet and then descended rapidly again, FlightRadar24 data showed. The last tracked altitude was 3,225 feet above sea level.

State media showed a piece of the plane on a scarred, earthen hillside. There was no sign of a fire or personal belongings.

Crashes during the cruise phase of flights are relatively rare, even though this period accounts for the majority of flight time.

Boeing said last year only 13% of fatal commercial accidents globally between 2011 and 2020 occurred during the cruise phase, whereas 28% occurred on final approach and 26% on landing.

"Usually the plane is on auto-pilot during cruise stage. So it is very hard to fathom what happened," said Li Xiaojin, a Chinese aviation expert.

Online weather data showed partly cloudy conditions with good visibility in Wuzhou at the time of the crash.

President Xi Jinping called for investigators to determine the cause of the crash as soon as possible, state broadcaster CCTV reported.

Boeing said in a statement that its thoughts were with the passengers and crew.

"Boeing is in contact with the U.S. National Transportation Safety Board (NTSB) and our technical experts are prepared to assist with the investigation led by (CAAC)," the company said.

The disaster comes as Boeing seeks to rebound from several overlapping crises including the coronavirus pandemic and crashes involving its 737 MAX model. Shares of the planemaker closed 3.6% lower.

China Eastern has grounded its fleet of 737-800 planes, state media reported. It has 109 of the aircraft, according to FlightRadar24.

Shares of China Eastern Airlines in Hong Kong closed down 6.5% after news of the crash emerged, while its U.S.-listed shares closed 6.3% lower.

The 737-800 has a good safety record and is the predecessor to the 737 MAX model that has been grounded in China for more than three years after fatal crashes in Indonesia and Ethiopia.

The crash has again thrust the U.S. manufacturer's most sold aircraft family into the spotlight and comes as it works to emerge from the 737 MAX safety crisis and global pandemic, which decimated air travel demand and strained its finances.

​ Investigators will search for the plane's black boxes - the flight data recorder and cockpit voice recorder - to shed light on the crash.

Air crash investigations are typically led by the country of the accident and include participation by the plane's country of origin, so U.S. investigators would be expected to join the probe of the U.S.-made Boeing jet.

The U.S. NTSB said it had appointed a senior air safety investigator as an accredited U.S. representative to China's probe. read more

China's airline safety record has been among the best in the world for a decade, although it is less transparent than in countries like the U.S. and Australia where regulators release detailed reports on non-fatal incidents, according to Greg Waldron, Asia managing editor at industry publication Flightglobal. read more