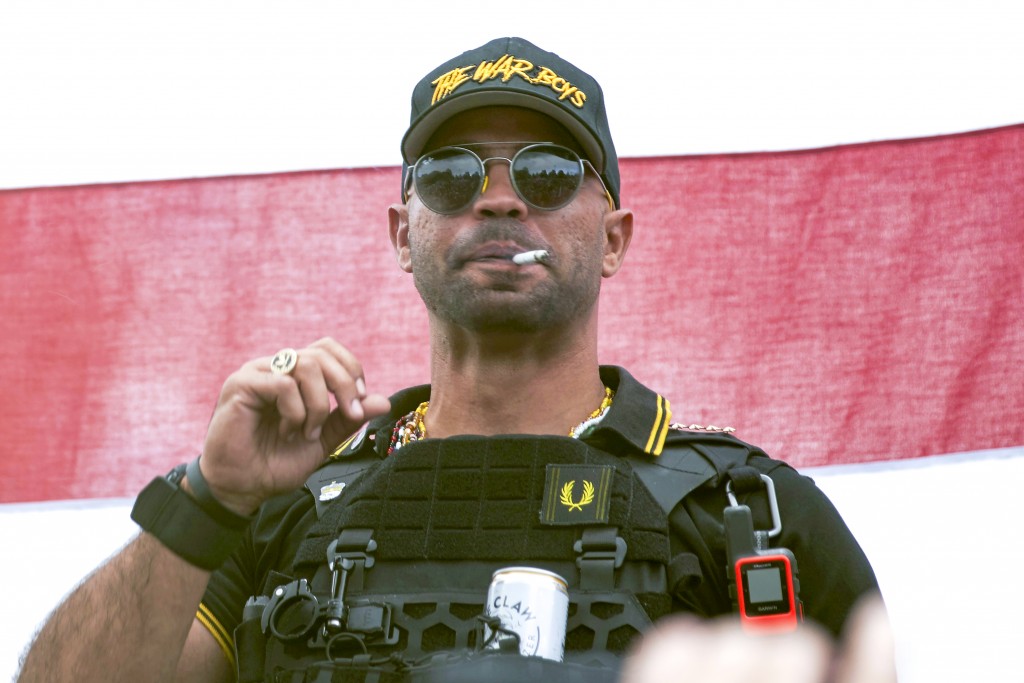 MIAMI (AP) — A leader in the far-right Proud Boys extremist group will remain jailed until his trial on charges that he remotely led a plot to stop Congress’ certification of Joe Biden’s 2020 presidential victory.

In a Miami courtroom Tuesday, U.S. Magistrate Judge Lauren F. Louis cited the danger that prosecutors say Henry “Enrique” Tarrio poses to the community. The judge said her decision would be explained in detail later in a written order.

Though he wasn’t at the Capitol with other members of the Proud Boys during the violent insurrection on Jan. 6, 2021, prosecutors say Tarrio created the leadership structure, organized the group of men and directed them to the Capitol. They say Tarrio organized encrypted chats with Proud Boys members in the weeks before the attack, had a 42 second phone call with another member of the group who was moving in and out of the building during the riot and took credit for the chaos at the Capitol.

“This is a crime that struck at the heart of our democracy,” said prosecutor Jason McCullough. “It is difficult to imagine something that is graver than this crime.”

Tarrio’s attorney Nayib Hassan said his client was not at risk of fleeing from authorities and doesn’t have a violent background. He argued the evidence against Tarrio was weak and relies mostly on text messages and social media.

“At no point in time did Mr. Tarrio instruct anybody to go into the building,” Hassan told the judge.

Tarrio sat down in a brown jail uniform in handcuffs on another table because the judge denied him the right to be seated by his attorneys. He did not speak, but he often made gestures to his attorneys for them to approach him to speak in private.

More than a dozen family members showed up at the courtroom, and some women were crying outside the courthouse after the ruling. They declined to comment on the decision.

Police had arrested Tarrio in Washington two days before the riot and charged him with vandalizing a Black Lives Matter banner at a historic Black church during a protest in December 2020. The day before the Capitol was attacked, a judge ordered Tarrio to stay out of Washington.

Instead of leaving town, Tarrio’s indictment said he met with Oath Keepers founder and leader Elmer “Stewart” Rhodes and others in an underground parking garage for about 30 minutes. Prosecutors say a documentary film crew was in the garage and picked up audio of a person making a reference to the Capitol.

A week before the riot, an unnamed person sent Tarrio a document that laid out plans for occupying a few “crucial buildings” in Washington on Jan. 6, including House and Senate office buildings around the Capitol, the indictment says. The nine-page document was titled “1776 Returns” and called for having as “many people as possible” to “show our politicians We the People are in charge,” according to the indictment.

Tarrio, who has since stepped down from his post as Proud Boys chairman, hasn’t yet entered a plea on charges of conspiring to obstruct an official proceeding and other counts.

Proud Boys members describe the group as a politically incorrect men’s club for “Western chauvinists.” Its members frequently have brawled with antifascist activists at rallies and protests. Vice Media co-founder Gavin McInnes, who founded the Proud Boys in 2016, sued the Southern Poverty Law Center for labeling it as a hate group.

On the morning of Jan. 6, group members met at the Washington Monument and marched to the Capitol before then-President Donald Trump finished speaking to thousands of supporters at a rally near the White House.

Just before Congress convened a joint session to certify the presidential election results, a group of Proud Boys followed a crowd of people who breached barriers at a pedestrian entrance to the Capitol grounds, an indictment says. Several Proud Boys also entered the Capitol building itself after the mob smashed windows and forced open doors.

More than three dozen of the more than 750 people charged in the Capitol siege have been identified by federal authorities as Proud Boys leaders, members or associates.

At the rally, Trump repeated falsehoods about widespread fraud in the election and told supporters to “fight like hell.” Election officials and courts across the country rejected the claims of fraud.