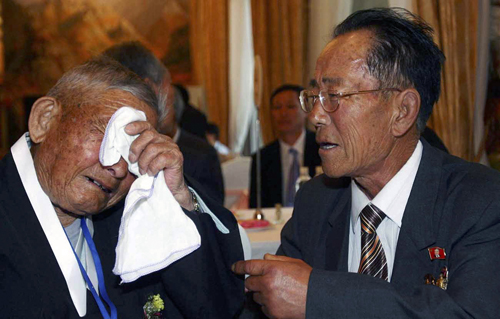 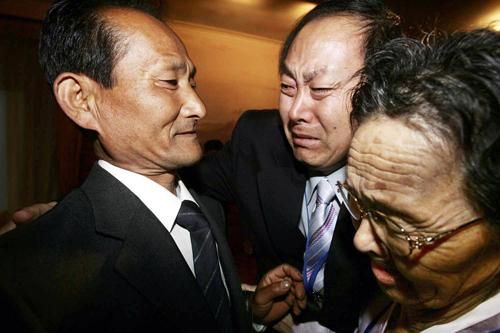 Choi Uk-il, 67, is still struggling to cope with his death 30 years ago.
A major drawback, according to the very-much-alive former fisherman, is that while he waits to be officially revived he cannot use South Korea's state medical system when he is ill.
Choi, who escaped from North Korea last year, is one of nearly 500 South Koreans kidnapped by the North, mostly during the 1970s and 80s. Their plight, supporters say, is largely ignored by a Seoul government unwilling to irritate its prickly neighbor.
"The South Korean government does very little to publicize this issue," said Choi Sung-yong, who heads the Abductees' Family Union, a group devoted to tracking down those spirited away to one of the world's most isolated countries and helping any who want to come back.
"The government isn't even allowed to use the word 'abductee'," he told Reuters in his tiny Seoul office where he is kept company by his police guard, appointed by the state after a murder attempt.
The official term is "those whose whereabouts are not known since during the war or thereafter," a category which also includes more than 500 POWs still held in the North from the 1950-53 Korean War.
Raising the issue
The Unification Ministry - in charge of relations across the the Cold War's last frontier and often criticized for being too soft on the communist North - says it has raised the issue through Red Cross talks since 2005 but has been little headway.
"We have pushed strongly on this, but the North continues to say that no abductees exist," a ministry official said.
One major daily, the Chosun Ilbo, said in a recent editorial: "The South Korean government vowed recently to resolve the abductee and POW issues in talks with the North Koreans. But ... (it) only ended up giving rice to North Korea ... the North must think the South is a joke."
A few days after his interview with Reuters, Choi Sung-yong was forced to leave Mount Kumgang, a resort just across the border and the only place in the North where South Koreans have easy access, after making a public protest about the abductees.
He said North Korean authorities also refused to accept a letter from him to leader Kim Jong-il on victims of abduction.
The Japanese government has tried to include the issue of its nationals kidnapped by North Korea in the current international talks to press Pyongyang to give up its nuclear weapons, but has been rebuffed by other countries, including South Korea, on the grounds it would only complicate matters.
Taken away
When fisherman Choi Uk-il was snatched from his boat at gunpoint by North Korean troops in 1975, relations between the two Koreas were so bitter that there were suspicions he had in fact chosen to leave his wife and children and defect to Seoul's arch-enemy and, at that time, relatively prosperous neighbor.
"It was very hard for my wife ... (people) suspected I had left voluntarily. So she registered me as dead," he said. "Since I was registered as dead, they have to revive me."
Late last year, he finally managed to escape into China, find his way back to South Korea and reunite with his "widow."
Once all the legal processes in the South are complete he should have access to government benefits, including use of the state health system.
Analysts say the motives behind the abductions were primarily for propaganda to show off the victims as willing defectors and also to help train spies in the South and Japan.
One of the most prominent abductees - and focus of Japan's high-profile campaign over the issue - is Yokota Megumi, who at the age of 13 was grabbed on her way home from school in 1977.
North Korea says she committed suicide but her parents believe she is alive. A man thought to have married her, himself abducted from South Korea, has backed Pyongyang's stand.
Used for spies
Kim Tae-ok is certain that her son, one of five South Korean students kidnapped in the 1970s, was used to help train spies.
Now an elderly widow, she says she would really prefer not to talk about him because it just sends her into long depression.
"I don't know who to take my lament to. I'd like to express my anger to someone.
"What I want is not to bring my son out if he doesn't want. I just want to see him to know if he is alive."
Activist Choi Sung-yong, whose own father was abducted in 1967 and never heard of again, says he has been able to track down about 130 of the abductees. He operates a safe house in China to help those escaping the North.
"They usually don't follow me right away to South Korea. I have to educate them and tell them how much South Korea has changed during the 30 to 50 years they weren't there. Thankfully, they have satellite broadcasting in China so we would just sit down and watch (South Korean) TV," he said.
The fate of the abductees is in the hands of North Korea's leader Kim Jong-il, Choi Sung-yong added.
"One word from him would solve everything."