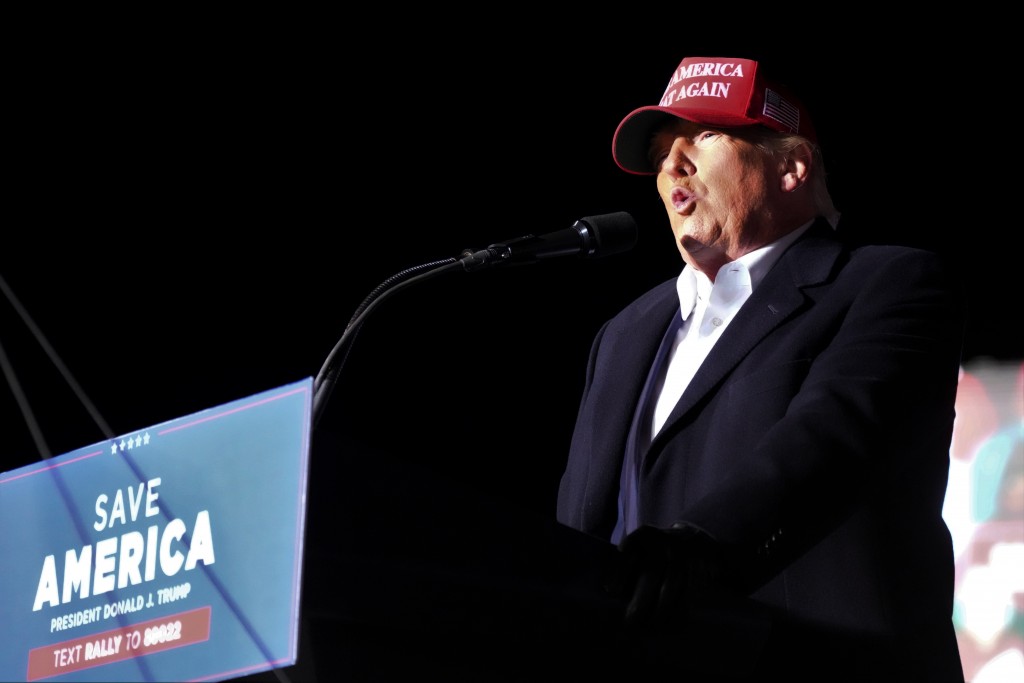 As former President Donald Trump continues to tease a future White House bid, a pro-Democratic super PAC has accused him of violating federal campaign laws by raising and spending money for a run without officially filing his candidacy.

In its complaint filed Monday with the Federal Election Commission, American Bridge accused Trump of “illegally using his multicandidate leadership PAC to raise and spend funds in excess of Commission limits for the purpose of advancing a 2024 presidential campaign." The super PAC says that includes “payments for events at Trump properties, rallies featuring Mr. Trump, consulting payments to former Trump campaign staff, and digital advertising about Mr. Trump’s events and his presumptive 2024 opponent.”

Alleging that Trump has already privately decided to mount a 2024 campaign, American Bridge says he was then obligated to file a candidacy intent statement within 15 days of receiving contributions or making any expenditure over $5,000.

"Trump has played footsie with the Federal Election Campaign Act for months,” the group said Monday, noting that the former president, through his Save America PAC, has spent more than $100,000 per week on Facebook ads “and has consistently raised more than $1 million per week — a clear violation of campaign finance law and precedent established by the Federal Election Commission.”

American Bridge wants the FEC to compel disclosure of Trump’s expenditures and fine him “the maximum amount permitted by law.”

Taylor Budowich, a Trump spokesperson, said the complaint by American Bridge was without merit and he accused Democrats of resorting to “cheap gimmicks.”

“Our country is spiraling into disaster because of the Democrats’ failures, and instead of reversing course to provide needed relief to American families, they are busy filing frivolous complaints that have zero merit," he said.

It’s unclear how the commission would proceed with the case, which joins a backlogged docket. Sometimes criticized as ineffective and far too slow in its decisions, the six commissioners — three Democrats and three Republicans — often deadlock along party lines, resulting in frequent dismissals.

In February, the FEC opted not to hold Trump accountable for “soft money” violations that his campaign had previously acknowledged.

Trump has been teasing the prospect of another run since before he left office. At a White House Christmas party in December 2020, Trump told guests that it had “been an amazing four years.”

“We are trying to do another four years. Otherwise, I’ll see you in four years,” he said.

Since then, he has alluded to his plans in nearly every appearance and interview, telling conservative hosts and Trump-friendly audiences that he is waiting to make an announcement until after the midterms because it would trigger campaign finance laws.

“I know what I’m going to do, but we’re not supposed to be talking about it yet from the standpoint of campaign finance laws, which frankly are ridiculous, OK?” Trump said during a September visit with first responders when asked if he would run again. “But we have to live with it. But I think you’re going to be happy.”

“We did it twice and we’ll do it again,” he told a gathering last month. “We’re going to be doing it again, a third time.”

“We may have to run again,” Trump said in South Carolina on Saturday, as he campaigned for two Republican candidates mounting primary challenges to House members he said have been disloyal to him.

“In 2024, we are going to take back that beautiful, beautiful White House. I wonder who will do that. I wonder. I wonder.”