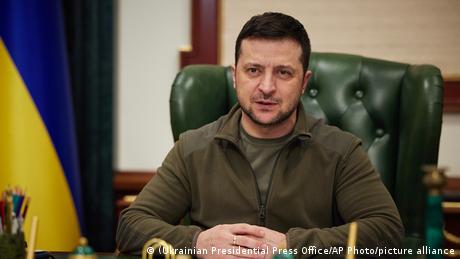 To catch up on Sunday's developments on the war in Ukraine, please click here.

This article was last updated at 07:02 UTC/GMT

The bodies were discovered in the 9-story apartment building.

The online news site Ukrayinska Pravda tweeted a video of the burning and damaged building, which has said to have been hit at about 7.40 am local time.

The Russian Finance Ministry has accused foreign countries of trying to force Russia into an "artificial default" through unprecedented sanctions over Moscow's war in Ukraine.

The ministry said it might have to repay some loans in roubles as Western sanctions take their toll on the economy.

"The freezing of foreign currency accounts of the Bank of Russia and of the Russian government can be regarded as the desire of a number of foreign countries to organize an artificial default that has no real economic grounds," Finance Minister Anton Siluanov said in a statement.

The ministry said it had approved a temporary method for repaying foreign currency debt, but added that sanctions could — in the future — prevent banks from honoring debts in the currency of issue.

In the statement, the ministry said Russia had enough funds to meet its debt obligations.

Germany is planning to equip its air force with US-built F-35 stealth military jets, according to the dpa news agency.

Berlin is reportedly seeking to use the Lockheed Martin planes to replace the country's Tornado fleet, introduced more than 40 years ago.

The F-35 is considered the world's most modern combat aircraft. Its unique shape and outer coating, make the jet difficult for enemy radar to detect.

According to sources, Germany plans to buy up to 35 of the planes.

In light of Russia's invasion of Ukraine, Scholz said he would bring the nation's investments above a key NATO commitment 2% of GDP.

Concerns had previously arisen that buying the F-35 aircraft could scupper joint plans with France to build a joint European combat aircraft.

Taiwanese computer maker ASUS will be putting in place a plan to "evacuate" its business and staff from Russia, said economy minister Wang Mei-hua on Monday.

He said Taiwan stands with other democracies and has taken action against Russia, but could not comment on what individual companies were doing.

"Russians have no moral right to use your brilliant technology! It's for peace, not for war!" said Ukraine's vice prime minister, who is also the minister for digital transformation. He had shared a letter on Thursday to ASUS Chairman Jonney Shih calling on the company to end its business in Russia.

Ukrainian President Volodymyr Zelenskyy has said he will continue negotiating with Russia and said that his delegation "has a clear task" to do everything to facilitate a meeting between him and Russian President Vladimir Putin.

Zelenskyy has repeatedly called for a meeting with Putin, but says that his requests have so far gone unanswered by the Kremlin.

Moscow has not ruled out the idea of a Zelenskyy-Putin meeting, according to Russian presidential spokesman Dmitry Peskov.

However, "we need to understand what should be the result and what will be discussed at this meeting," the spokesman was quoted as saying on Sunday by the Interfax news agency.

Zelenskyy said representatives of the two countries hold daily talks via video conference, adding that they were necessary to allow the establishment of a cease-fire and more humanitarian corridors.

On Sunday, both sides signaled cease-fire talks were making headway. Talks are expected to continue on Monday.

The Ukrainian army said on Monday that Russian troops were trying to gain a foothold in occupied positions and were preparing several fresh attacks.

"The enemy is forming and moving strategic reserves to our borders," the Ukrainian general staff said in a daily bulletin.

Ukraine accused Russian forces of destroying stationary military and civilian infrastructure in the country, in contravention of international humanitarian law.

The bulletin said that Russian forces in the eastern Luhansk region were concentrated on advancing towards the city of Severodonetsk. According to the Ukrainian military, Russian forces suffered casualties and retreated from the towns of Topolske and Shpakivka in the Kharkiv region.

Summary of events in Ukraine-Russia crisis on Sunday

Russia said its forces hit a military training facility in western Ukraine, near the Polish border. A Ukrainian regional governor said 35 people were killed and 134 wounded in the attack.

A US filmmaker and journalist was also killed Sunday.

The head of the International Monetary Fund (IMF), Kristalina Georgieva, said Russia is at risk of a deep recession that might make it unable to pay its debts.

Russian NGO OVD-Info said that more than 800 people were detained during peace rallies in 37 Russian cities.

Ukraine said it fixed a broken power line to the Chernobyl power plant, which has been seized by Russian troops.

A far-right group has staged a protest in the Serbian capital Belgrade in support of Russia's invasion of Ukraine.

Earlier on Sunday, a new mayor was reportedly installed in southeastern Ukraine's city of Melitopol after the previous mayor Ivan Fedorov was abducted by Russian troops, according to media reports.