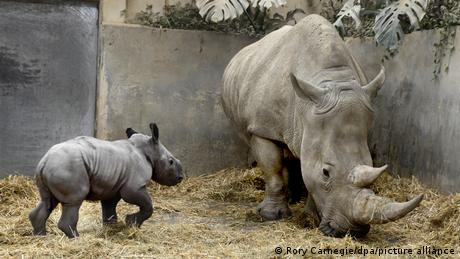 A British Zoo has named a white rhinoceros calf after Queen Elizabeth II, UK media reported Saturday, as the monarch celebrates 70 years on the throne.

Queenie is the newest addition to the rhino family at Cotswold Wildlife Park & Gardens, a zoo based in the grounds and parkland belonging to a 19th-century manor house, in Oxfordshire, England.

"All the rhinos here are named after very special people and I think everyone agrees that 2022 will always be special because of Queen Elizabeth's Platinum Jubilee," park chief Reggie Heyworth said in a statement.

"I thought it might be a bit presumptuous to call our new baby 'Elizabeth;' so I have christened her 'Queenie' instead. I think it is a perfect name for a young lady rhino!" he added.

Queenie is the ninth white rhino calf to be born at the zoo, and visitors will be able to view her in the park's Rhino House and paddock.

The rhino isn’t the only royal-related birth at the zoo. A Bactrian camel was named after the queen's great-grandson Prince Louis, as they were born on the same day.

White rhinos were on the verge of extinction in the early 1900s, with only around 20 to 50 remaining in their African homeland.

Numbers have recovered somewhat after the animals were offered protection. Even so, births in captivity remain rare, the wildlife park said.

Only five white rhinos have been born in the UK over the past year, and 12 in European zoos, the park said.

The other four rhino species are either critically endangered or presumed extinct in the wild, according to International Union for Conservation of Nature (IUCN).

Queenie joins a chicken dish, a cake, ships, trains and a host of buildings around the world named in honor of the monarch.

The 95-year-old Elizabeth is marking her Platinum Jubilee with dozens of celebrations expected to be held this summer.

But she has been suffering from ill-health including a mild bout of COVID-19.

The monarch was forced to cancel an appearance at a Commonwealth Day service in Westminster Abbey taking place on Monday.

With material from AFP news agency