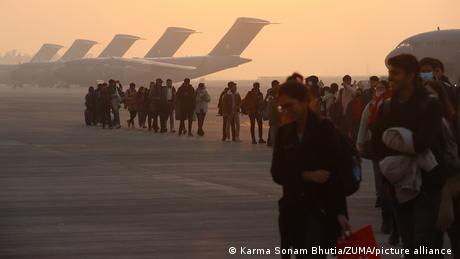 India has completed the final leg of its Operation Ganga rescue mission for Indians stranded in war-torn Ukraine.

Within 13 days, roughly 18,000 out of an estimated 20,000 Indian citizens who had been living in Ukraine were evacuated and flown to India. The operation ended on Thursday.

Indians were flown from cities in Romania, Poland, Hungary, Slovakia and Moldova after they crossed border transit points in Ukraine.

External Affairs Minister S Jaishankar, who worked closely with the Indian embassy in Ukraine, tweeted on Friday that Operation Ganga proved to be "particularly" challenging and thanked those involved in coordination efforts.

"Our particular gratitude to the authorities in Ukraine and Russia as well as the Red Cross for the evacuation assistance," he wrote. "Ukraine's neighbors — Romania, Hungary, Poland, Slovakia and Moldova gave us exceptional support. My sincerest thanks to them."

About 76 flights belonging to the Indian Armed Forces, Air India and private carriers such as IndiGo, SpiceJet, and Air India Express were used in Operation Ganga.

The Ministry of External Affairs pledged in a statement that the search for Indian citizens who may have been left behind or stranded in other areas would continue.

India's quick evacuation process has been lauded by many. As soon as the war broke out, India released an official statement appealing for de-escalation of violence.

However, during the United Nations Security Council vote condemning Russia's aggression in Ukraine, India abstained from voting. New Delhi then abstained from another vote in the UN General Assembly.

India instead concentrated efforts on repatriating its citizens and providing humanitarian aid — but that too has come under fire.

Some say insufficient support was provided to Indian citizens in Ukraine, many of whom were medical students and forced to travel without aid to neighboring countries by train, bus or foot in order to be evacuated.

Medical student Naveen SG from the Indian state of Karnataka was killed during shelling by Russian forces in Ukraine.

Indian media reported that the public Indian Community Welfare Fund (ICWF), which aims to assist overseas Indian nationals during times of distress, was not adequately made available for evacuation.

"In December last year, the government of India said in the Lok Sabha (lower house of Parliament) that ICWF has a fund of 4,740 million (rupees). From the time of COVID till October 2021, the government had spent 440 million from this fund. Despite having a fund of 4,000 million, it was not used in time," NDTV journalist Ravish Kumar said in a blog.

Meanwhile, reports of unequal treatment of Asians and Africans while trying to flee Ukraine also emerged.

"The audacity that people could just shove us away from the borders because we are foreigners broke my heart. Because that is not how Ukrainians are," Abhishek Singh, a student who escaped to Slovakia from Ukraine, told DW.

Evacuation is 'a duty'

Critics have also accused Prime Minister Narendra Modi's government of using the evacuations as an opportunity for publicity and self-promotion during state elections.

"Evacuation is a duty, not a favor," tweeted opposition politician Rahul Gandhi.

"If medical education policies were right earlier, then you would not have to go abroad," Modi said while speaking to students who had escaped from Ukraine and their families.