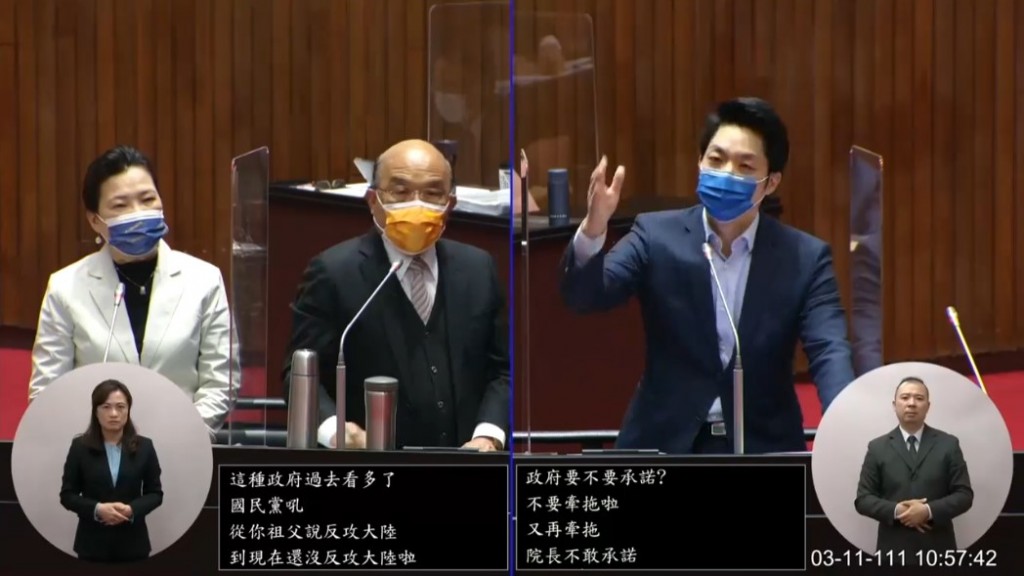 The exchange took place during an interpellation in the Legislative Yuan. While discussing the power outages, the conversation quickly became heated when Chiang, the great-grandson of Chiang Kai-shek (蔣介石), repeatedly demanded that Su “guarantee” there would not be more blackouts in the future.

“As the premier, are you willing to guarantee that there will not be blackouts in the future?” Chiang asked.

When Su tried to explain that the government had already taken responsibility and that he would rather focus on addressing the issue itself, Chiang asked again: “Premier, answer the question: do you dare guarantee there will be no blackouts in the future?”

“I am not one to just shout slogans,” Su responded before being interrupted.

“All right, Premier, you dare not guarantee. That is an answer as well,” Chiang said. He then referred to the minister of economic affairs: “Minister Wang Mei-hua (王美花) was at least willing to promise a year (without blackouts).”

Though Su asked him not to take a taunting tone, Chiang continued, “You just don’t dare!”

“We’ve seen enough of these types of government in the past,” Su answered. “The KMT has promised since your grandfather’s reign to recapture China, it still hasn’t recaptured China. That was a most irresponsible government.”

Su added, “What price have the Taiwanese paid for the KMT’s promise? In order to fulfill your grandfather's, your great-grandfather’s promise, I served in the military for two years. I was told I would be the first to set foot in mainland China and save our compatriots. What is the point of a guarantee?”

After calming down somewhat, Su said that the current government’s policies are not at fault, emphasizing that he is burdened with various problems left over from the past. He accused Chiang of putting on a show for the upcoming mayoral election while Su was trying hard to actually resolve issues.

The episode came to an end when Wang stepped in to answer Chiang’s question about the government’s goals for Taiwan’s transition towards renewable energy.