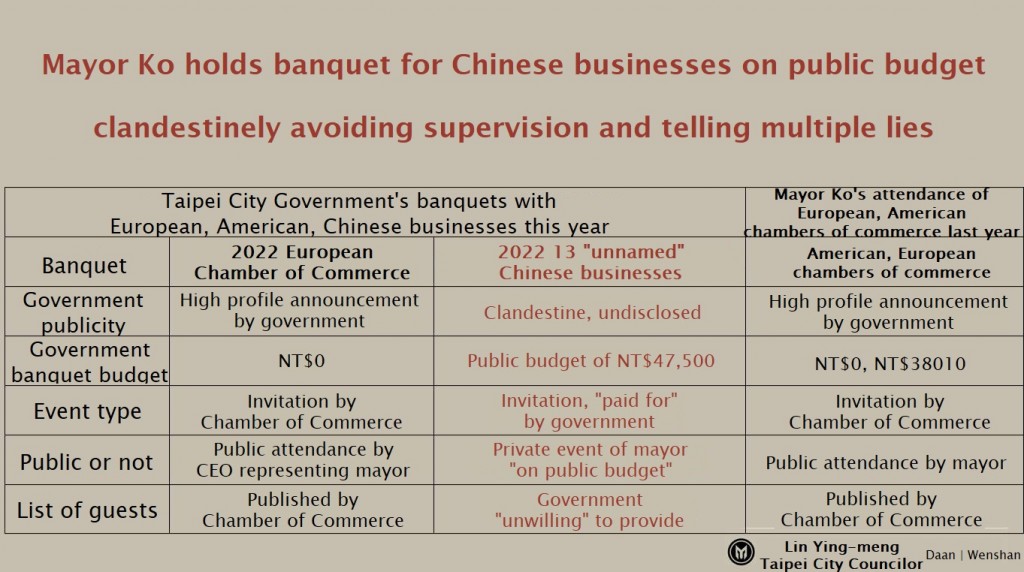 In February, reports of a “Taipei City Government” banquet at the Grand Hyatt Taipei caused immediate controversy. Ko and Deputy Mayor Tsai Ping-kun (蔡炳坤) were photographed by an anonymous customer or customers while attending the event.

In response, Ko said in a press conference that the Taipei City Government had always held banquets with the European and American chambers of commerce to address issues and concerns foreign investors may have, which was why the government decided to do so for Chinese businesses as well. He insisted that the event was “official” and organized by a union and that “there aren’t really any problems with it.”

However, on Friday (March 11), Lin wrote on Facebook that Ko’s team had refused to provide details about the banquet when asked.

“Mayor Ko held a banquet for Chinese businesses on the public budget, clandestinely avoiding supervision and lying publicly,” Lin’s post read. She demanded that Ko “immediately publish the list of guests and topics discussed for the benefit of citizens.”

“To this day, (the Ko administration) is still unwilling to provide the full list of Chinese businesses that attended and issues discussed during the event, making excuses such as it is ‘unable’ to do so and has ‘personal information concerns,’” Lin wrote.

“Mayor Ko claims this is an official event of the Taipei City Government, yet he has not made a show of issuing press releases and photos or publicly discussing issues or agreements signed as he does when attending banquets with the European and American chambers of commerce. When it comes to China, he sneaks around and tells lies.”

She added that whenever Ko’s administration attended banquets with the European and American chambers of commerce, the events were public and the city government would attend as a guest.

ETToday reported that Taipei City Government Spokesperson Vicky Chen (陳智菡) called Lin’s allegations “preposterous,” saying, “The government is courteous when interacting with people from various countries; there is nothing to hide.” Chen was accused Lin of being motivated only by her political stance, of making groundless allegations, and of not having any “literacy for democracy,” per the report.